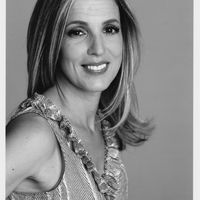 Tanya Pushkine, aka “The Vow Whisperer”, has been helping her friends write their wedding vows for years. But, after receiving an enthusiastic response to her own vows last April, she decided to take the leap and turn her consultancy into a fulltime job. “Putting together vows can be daunting and intimidating,” says Pushkine, a Juilliard-trained actress and former publicist. “My goal is to make it fun, collaborative, and stress-free.”

Tanya Pushkine is the founder of The Vow Whisperer, a service that helps couples write their wedding vows. She is a Juilliard-trained actress and former publicist.

Turns out, Pushkine is not alone. As more and more couples look to write their own vows, they’re turning to professional wordsmiths to help shape their prose into something more personal and intimate. Companies such as Wedding Words, Vow Muse, and Write Weddings offer everything from vow editing, to speech coaching, to officiant services.

Putting together vows can be daunting and intimidating. My goal is to make it fun, collaborative, and stress-free.

When Cat Quinn, the beauty director at Refinery29, married her longtime boyfriend this past October, she accepted Pushkine’s offer of help. “Not only did Tanya’s coaching result in the most special moment of my wedding, but I continue to use the skills she taught me in my personal and professional life," she says. "I gave an impromptu speech in a room full of people the other day and heard Tanya in my head saying, 'Stand tall, plant your feet!'"

Below, Cat walks us through the process of what it was like to hire a professional vow consultant (and posture coach!) for her wedding—and why it was worth all the extra effort.

Why Hire A Professional Vow Writer?

In short: Cat says she wanted her own editor. "I know the power of a good editor and I know a good editor isn't someone who writes or rewrites your work, but who helps guide and shape your story in your own words and voice," she says. "I would never write a story without an editor, and this was the most important story I would write in my life. I was grateful to have someone with experience in this specific area to offer feedback, and who, thanks to her career as an actress, was also able to help with the presentation and public speaking part."

Should You Hire a Professional Vow Writer?

Once You Did, How Did It Work?

Typically, Pushkine prefers to meet with clients at least eight weeks before the wedding. That said, Cat admits that she was so stressed with wedding logistics and planning that she didn't even think to reach out until about four weeks before her wedding. "I hadn't even thought about the actual ceremony or vows," she admits. Once she did, Pushkine got to work—with both Cat and her partner! "The biggest misconception people have with a vow consultant is that they write your vows. This couldn't be further from the truth," she says. "Tanya didn't write a single word—instead she sat with us, listened to us, and coached us as we shaped exactly what we wanted to say and promise to each other." Step one was a worksheet, which Cat says was "incredibly helpful. "Instead of sitting down and staring at a blank page—a writer's nightmare!—Tanya sent us dozens of questions and encouraged us to answer any that resonated," she says. "They ranged from, 'When was the first time you realized you were in love?' all the way to 'What is something funny or cute they do?'" After Cat filled out the ones that spoke to her, she and Pushkine discussed how to shape her answers into a narrative that made sense...then, Cat wrote and finalized her first draft. "From there we briefly went back-and-forth as she encouraged me to expand in certain areas, like describing how my husband makes me laugh, instead of just saying it," she says. "We agreed on a time length, about five minutes each, and she helped me edit my vows down without losing the substance of what I wanted to say."

Did You Practice The Delivery?

"Yes! Tanya stressed to me that how you present your vows is just as important as the words you say," Cat says. They practiced together, with Pushkine standing in for her future husband, Bobby. "She taught me to slow down, when to pause, and even pointed out my nervous quirks (I tend to shift my weight or bob up and down when I'm public speaking), which was super helpful," she says. "My husband and I each practiced with Tanya right up until the day before our wedding." Don't worry: "We didn’t read or hear each other’s vows until our actual ceremony," she says.

How Did Your Partner Feel About It?

"Bobby was originally a little nervous about writing our own vows—especially since I write for a living and we would be reading them one after the other," she admits. "But after working with Tanya, I believe his vows were better than mine! He had the room laughing and crying, including me." In fact, Cat says his vows were not a one-time show. "Now, we read a portion of our vows to each other every month on our anniversary," she says. "They're truly the foundation of our commitment to each other and they bring us so much joy."

Did You Tell Friends And Family About The Service?

Cat says she was open about it with close friends but also knew there would be others who wouldn't understand. "You ask for help with everything on your wedding day—the flowers, the cake, the dress, the catering, but for some reason, there is a stigma about asking for help with your ceremony and vows, which is the most important part," she says. "Anyone who witnessed our vows knows we didn’t just pass this responsibility off to someone else, because there was no way someone else could have written them as they were so personal to us."

How to Write Your Own Wedding Vows, Including 17 Vow Examples

What Did You Learn?

First, Cat admits that she didn't quite realize how much time would go into writing and practicing her vows. "In the movies, you always see people scribbling down the last word right before they walk into the ceremony—and that is the complete opposite of Tanya's approach," she says. "Not only did she encourage us to practice our vows separately at least once a day, but she also practiced them with us one-on-one for hours—even Facetiming us separately from her vacation in Italy so we wouldn't lose momentum. It was quadruple the amount of practice I would have done on my own, and while I sometimes grumbled about the extra time and work, I'm so grateful she pushed us to make it a priority even when everything else was spinning around us."

Well, How Did It Go?

"Because I had practiced, I was able to focus so much more on my words to Bobby and his words to me," she says. "My nerves faded away and I remember every second of that moment, which is truly the greatest gift I could have received. Our family and friends said their favorite part of the night was hands-down our vows—that they felt personal, quirky, honest, meaningful, warm, touching, and funny—which is exactly what we were hoping for."

Since they were married in Dallas, Pushkine didn't witness the vows IRL, but Cat says they texted her the next day to thank her and plan on sharing their wedding video once it's ready.

"Bobby and I didn't see each other's vows beforehand and we couldn't believe how similar they were—we always joke that we are weirdly in sync, but it was wild how many stories and anecdotes we both referenced organically," she says. "We really wanted our wedding to reflect the joy and humor in our relationship, instead of just the cheesy love stuff." Throughout their vows, Cat says she and Bobby poked fun at each other, as evidenced in her favorite lines:

CAT: To us, winning is ending up on the same side—unless it’s game night, in which case I will crush you and you know it.

BOBBY: I promise to always comfort and support you however I can—including with a steady dose of Thai food, dark chocolate, light-hearted comedies, and more frequent comments on Instagram (I’m still working on this one).

For more information on The Vow Whisperer, visit here.