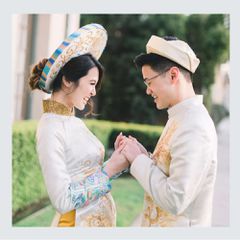 A Romantic Winter Wedding at Ebell Long Beach in California

Teri Nguyen and Alex Guo love to joke that their relationship had a “heavenly” beginning. “We bumped into one another in the lounge at Heavenly Ski Resort in Lake Tahoe,” says Teri. They’d met once before, so Teri had no qualms about snagging a garlic fry off of Alex’s tray—and by the end of their conversation, she’d snagged his heart, too.

After six years of dating, Alex recreated a date Teri had taken him on early in their relationship by bringing her to Mount Soledad, which features breathtaking views of San Diego below. “One Alex's friends was disguised nearby and was stealthily snapping photos while Alex showed me a video chronicling the past six years of our lives,” Teri recalls. “As the video came to a close, I turned around and found Alex on one knee!”

The bride grew up in Long Beach, California, and a hometown wedding was the perfect fit for the Cali-based couple. They chose Ebell Long Beach for its airy feel, the lush plant life that brought the outdoors in, and a killer tile floor. Their planner Julia Kim of Rekindle Creative enhanced the modern, romantic space with a palette of cream, blush, mauve, lavender and pale blue, fitting tones for a winter wedding on the West Coast. And, on February 23rd, 2019, Teri and Alex tied the knot in front of 230 guests.

Photographed by Anya Kernes Photography, you’ll fall for the light and bright design of this California wedding. Take a peek below!

Teri’s wedding gown was a two-piece design from Blush by Hayley Paige. She topped her floral sheath dress with a cascading removable tulle skirt for an extra dose of romance.

The bridesmaids wore pale blue, each choosing a silhouette (and a price point!) that was right for them. While their dresses were different, they all carried matching bouquets of blush and mauve roses, sea holly, sweet peas, and vibrant greenery.

The couple opted to do a first look before the ceremony, which was made more dramatic thanks to their venue's draped entryway.

Alex wore a custom blue suit from Suit Supply, which he paired with black leather Salvatore Ferragamo shoes. “Alex's shoes were a gift from my dad,” says Teri. “He’d bought them for himself and was saving them to wear to my wedding but passed away before that day came. When he gave them to Alex, he asked him to keep that promise and wear the shoes himself.”

As a nod to the fun they hope to have over a lifetime, Teri and Alex asked guests to sign Jenga pieces as their guest book.

The ceremony took place in front of an asymmetrical installation of blush, mauve and cream roses, sweet pea, hydrangeas, and delphinium, accented with eucalyptus. Guests were seated on cross-back chairs, and the venue’s detailed tile floors added a pop of color beneath their feet.

Teri made the acrylic signs carried by the flower girls and ring bearer. The flower girls’ signs read, “You think we look cute… Wait until you see the bride!” and the ring bearer’s read, “Has anybody seen the rings?”. “Our ring bearer was three, and up until our wedding day, we didn’t know if he’d make it down the aisle at all, let alone carrying the sign," Teri says with a laugh. "His sign was upside down and backwards but he was so proud to walk by himself!”

At the end of the ceremony, Alex surprised me with a dramatic dip for our first kiss.

One of the groomsmen officiated, filling his remarks with quotes from classic romantic comedies. Alex and Teri wrote their own vows, including jokes, mentions of Teri’s father, and a nod to their Shih Tzu, Wawa. “At the end of the ceremony, Alex surprised me with a dramatic dip for our first kiss,” Teri recalls.

After the ceremony, the couple changed into traditional Vietnamese wedding attire. The fabric was covered in intricate gold and floral embroidery.

The ceremony space was flipped for the reception, with the floral arch now framing Teri and Alex’s sweetheart table. Simple cream linens were topped with gray napkins and low floral arrangements. Guests sipped wine out of cut-crystal goblets and dined on sake brown sugar seared salmon and truffle macaroni and cheese.

“We carefully chose intro songs for every member of our wedding party,” says Teri. The selection ranged from AC/DC to Justin Timberlake.

The newlyweds surprised their guests with a performance of their own, singing “Better Together” by Jack Johnson. “Alex was so nervous that he forgot all the words, so we switched to a crowd favorite: ‘Sunday Morning’ by Maroon 5, " Teri admits. "Everyone sang along with us!” After the wedding, the couple honeymooned in Venice, Rome, and Paris, timing their March trip to coincide with Venice Carnival. “Seeing everyone in masks and costumes felt like we were in another time,” says the bride.

Along with the help of a great wedding planner, Teri and Alex credit their smooth planning process with one tip. “We chose three things that we wouldn’t compromise on, and stuck to it,” she says. “There are a lot of people with a lot of opinions who want to try to help, so knowing what we really wanted made it easier for us to stand our ground and make sure we had the day we always dreamed of.”