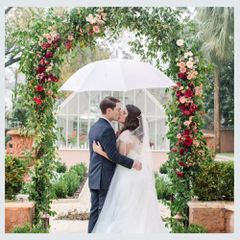 A Cozy Winter Wedding at Home in Columbia, South Carolina

Katherine Blanchard and Davis Whittle have mutual friends and football to thank for their meeting. In September 2014, they both found themselves in Nashville, Tennessee, where they'd come to watch the University of South Carolina take on Vanderbilt in football. “We went on a date the following week and have been together ever since,” says Katherine. Three years later, Davis proposed during a visit to Katherine’s family farm in South Carolina. “He surprised me with a party at my parents’ house with our family and friends,” she remembers.

The pair decided to host their December wedding reception at home as well. “My parents were also married there, and Davis and I have spent lots of time together at their home so it’s meaningful to us, "Katherine says. "It’s also beyond beautiful!” Keep reading to see Katherine and Davis's December wedding—featuring a cocktail party-style reception filled with décor ideas that feel wintery but not Christmas-y—planned by Bellafare and photographed by KT Merry.

The couple opted to do an at-home wedding for many reasons—one of which was the vibe it created. "Davis and I are both laid-back so we wanted our guests to enjoy themselves fully," she explains. "We wanted a romantic yet relaxed celebration of our marriage, and I think having it at my parents’ home also helped create the environment we were looking for."

For the décor, Katherine says she "wanted lots of classic romance!" “We decided to get married in December, and while we wanted the charm that comes with a winter wedding, I didn’t want it to be too ‘Christmas-y,'" she says. "I knew I'd be thrilled as long as there was lots of greenery, candles, beautiful flowers, and good food.”

“I’d seen my dress on Romona Keveza’s Instagram and decided to try it on for fun even though I wasn’t sure it was my style and it was so different than what I thought I wanted,” says Katherine. “I’m so happy I did because the second I put it on, it felt like ‘the one’.” The silk crepe gown featured an illusion cap sleeve overlay of Reticella lace. Katherine completed her look with diamond-and-pearl-drop earrings from jewelry designer and friend Jenny Thompson of Charleston’s Theodosia Jewelry, as well as a pearl bracelet that had belonged to her grandmother.

Katherine's 10 bridesmaids wore navy dresses by Ghost London paired with moonstone drop earrings, a gift from the bride. “I wanted a uniform look for my bridesmaids, as well as a dress that was flattering and timeless," she says. "I’ve always loved a cowl neck and thought the style fit the aesthetic of the wedding perfectly.”

I’d originally been hesitant to do a first look because I was worried it would take away from the moment I walked down the aisle to him, but I couldn’t be happier we had that time, just the two of us.

One of the bride’s favorite moments of the day was the first look with the groom, who donned a custom midnight blue suit by Oxxford Clothes. “Davis looked so handsome and it was such a calming, surreal moment for me," she recalls. "I’d originally been hesitant to do a first look because I was worried it would take away from the moment I walked down the aisle to him, but I couldn’t be happier we had that time, just the two of us.”

“We chose St. John’s Episcopal Church for our ceremony because of its intimate size and the supportive community,” Katherine explains. One of the day's most memorable moments came after exchanging vows. “I got confused and kissed Davis at the wrong time!" Katherine admits. "It set off a chain reaction—the bagpiper started to play the recessional and, then, Davis and I began to walk out only have Father Fleischer tell us it wasn’t over yet. I was mortified but so many people came up to me that night to tell me how sweet and special the moment was.” Once the ceremony officially concluded, the newlyweds held hands as they made their way down the aisle to “Scotland the Brave” performed on the bagpipes.

After the ceremony, guests were transported to Katherine's family home for the reception. Rain forced the event indoors, but the property was dressed with candles, uplighting, and greenery to play up the cozy, at-home vibe.

The couple opted for a cocktail-style reception rather than a seated dinner. "We didn’t want a party that felt too structured or formal,” says the bride. All 275 guests mingled throughout the first floor of the bride’s parents’ home, as well as in various tents set up throughout the property.

Food stations were spread throughout the entire first floor of the house and within tents. “We had an eclectic menu of sashimi, scallops, short rib sliders, oysters, and more,” says Katherine. “Guests are still talking about the food!” The couple didn't have an official signature cocktail but all drinks were served alongside napkins personalized with their initials.

“There were flowers everywhere!” says Katherine. “Fern Studio placed arrangements of plum, purple, and cranberry-hued flowers in every nook and cranny of the house and tents.” The couple worked with Kristin Doggett of Bellafare to bring the romantic, wintery celebration the bride had envisioned to life. “The candles and the twinkly lights felt truly magical," she adds.

Clear tents were draped in a lush cream-colored fabric with greenery woven throughout the canopy to create an intimate, elegant backdrop. Rentals included a mix of modern and rustic furniture styles, all done in a neutral color palette to allow the florals to pop.

The couple's sweet potato-flavored wedding cake was made with candied pecan crunch and maple buttercream. It was served alongside flourless chocolate tortes and botanical shortbread cookies. “The desserts were truly works of art—and delicious as well,” says the bride.

After enjoying the food stations and mingling in the event's many lounge areas, guests moved into a dancing tent to watch the newlyweds perform their first dance to “Come Home,” by Leon Bridges. At the end of the evening, Katherine (now in a short silver dress!) and Davis shared a kiss before heading off to London for their honeymoon. “People aren’t kidding when they say the wedding will fly by,” she says. Her advice? “Be present and enjoy every second!”