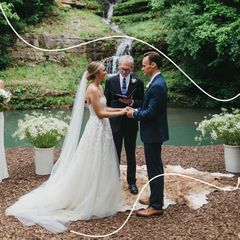 Or defy tradition with your own unique exchange

Michelle M. Winner
Michelle M. Winner is a luxury lifestyle writer and an ordained non-denominational minister. She has performed hundreds of weddings and is licensed in all 50 states.
Brides's Editorial Guidelines

As you count down the months to your wedding date, you’re likely to begin to focus on your ceremony and vows. But have you wondered who traditionally says wedding vows first and why it’s done that way?

The exchange of vows in your ceremony is the magical part of the service when you hear your beloved say their vows to you in front of your guests and family for the first time. Their words may bring tears or laughter, but we are confident in saying that this romantic moment will imprint on your hearts forever.

However, what if the “traditional” order of vows isn’t appropriate or doesn’t work for your circumstances—are there alternatives? Read on for some history on the wedding vow tradition along with tips for choosing the best order for you and your partner.

The Simple, Uncomplicated Approach to Writing Your Wedding Vows

What Is the Traditional Vow Order?

What is referred to as the traditional order of vows is simply the way wedding ceremonies have been performed in a patriarchal religious society for centuries; the groom says his wedding vows first. It’s important to understand, however, that in these societies, the males were heads of households, tribes, and clans. Females, if not considered equals, were sometimes considered possessions or lesser beings to males. Many religious wedding sacraments and ceremonies will have the groom saying his vows first.

In today's world, this order could be interpreted as a male superiority statement. Plus, the traditional order disregards same-sex couples. If you are getting married in a church, open a dialog with your clergy or priest about this and ask if you can switch the order if you wish to do so. If you are being married in a less-restrictive religion, ask your clergy person. Most secular or non-denominational officials will adjust your vows to any order that you want.

How to Decide Who Goes First

Times change and what is considered a traditional wedding is shifting from a patriarchal format towards a more gender-neutral and equal ceremony according to what each couple prefers. Feel free to change the traditional order and delivery of the vows if your circumstances warrant. Here are a few ways to help you decide who should read their vows first—and remember, there is no right or wrong way to say your vows!

Make this decision early! Your officiant will need to know how to organize the ceremony script prior to the wedding day.

For some heterosexual couples, the traditional “groom goes first” is exactly right for them and their ceremony. Culture and tradition may play a large part in this decision, or they may not have a choice in the order of vows because of their religion-specific requirements of the sacramental nuptials. So embrace tradition and go with it!

The personal dynamic within your relationship may make the choice of the order of your vows easy for you. The best advice is always to go with what feels natural for you both. The decision should be mutual. Just talk it out!

How about having some fun and leaving the decision to fate? Opt to flip a coin, draw straws, play a few rounds of Rock Paper Scissors, or roll the dice. For extra levity, play a creative decision-making game at your engagement party or joint-shower party surrounded by family and friends.

Say Your Vows Together

The ultimate solution, if you are on the fence as to the order of your vows, or prefer to deliver your vows to each other in the most equitable way possible, is to say them at the same time. Although not recommended for vows that differ from each other, you can both answer in unison to a set of questions posed by your officiant with “I do” or say the “Repeat After Me” set of vows.

101 Romantic Wedding Quotes to Include in Your Vows
more in