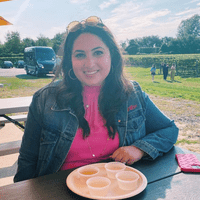 Benedict Cumberbatch is arguably one of the world’s most famous—and most private—actors. As such, his wife, Sophie Hunter, has successfully managed to stay out of the spotlight, with the exception of the occasional red carpet appearance.

The pair reportedly met back in 2009 while on the set of Burlesque Fairytales. However, Cumberbatch and Hunter were both coupled up at the time (him to actress Olivia Poulet, her to sculptor and longtime love Conrad Shawcross), so it’s unclear when they actually started dating. The two announced their engagement in 2014 (more on that below!) and tied the knot in 2015.

Despite the Sherlock and Doctor Strange star being notoriously tight-lipped about his family life, including his spouse, we were able to dig up a few interesting facts about Hunter. Ahead, everything we know about Hunter, including her accomplished career, hidden talents, and much more.

Like her husband, Hunter is also British. She was born and raised in Hammersmith, an arty neighborhood in London.

She also works in the entertainment industry.

Hunter is an incredibly talented playwright, opera director, and theater director. Over the past 15 years, she has directed productions across the globe. She also served as the co-founder of Lacuna Theater Company and Boileroom, another theater company.

She also took a page out of Cumberbatch’s book by dabbling in acting. In 2004, she made her debut alongside Reese Witherspoon in Vanity Fair. A year later, she co-starred in the British TV film Friends & Crocodiles.

She’s got some hidden talents, too.

Hunter is a modern-day Renaissance woman. Not only is she an accomplished playwright and theater director, but she also speaks fluent French and Italian (she studied the two languages at the University of Oxford). She also plays piano and sings: back in 2005, she recorded a French-language album, The Isis Project.

She’s not active on social media.

Both Cumberbatch and Hunter are pretty private, often opting to keep their relationship out of the spotlight. As such, Hunter and her husband have chosen to stay off social media.

While Cumberbatch’s career has (and continues to) skyrocket, Hunter remains unfazed by his fame. The A-lister previously gushed about Hunter to People, saying: "She’s just so in command of it. It could be a difficult thing, but she’s just really cool [...] It’s really impressive."

She was in a long-term relationship prior to dating Benedict.

As previously mentioned, Hunter was previously linked to sculptor Conrad Shawcross. The former couple met at Oxford University and dated for several years before calling it quits. At the time, Hunter told Daily Mail: "We met at Oxford and we were really good friends there, things went from there and we are very happy together."

She and Benedict announced their engagement the old-fashioned way.

The couple tends to shy away from the spotlight—but that didn’t stop them from sharing their happiness with the world when they got engaged back in 2014. To celebrate the news, the couple went old-school by taking out an advert in The Times. The announcement read, "Mr BT. Cumberbatch and Miss S.I. Hunter: The engagement is announced between Benedict, son of Wanda and Timothy Cumberbatch of London, and Sophie, daughter of Katharine Hunter of Edinburgh and Charles Hunter of London."

She and Benedict got married in 2015.

Just three months after announcing their engagement, Cumberbatch and Hunter tied the knot on the Isle of Wright, a small island off the coast of Great Britain. The small, low-key ceremony took place on Valentine’s Day, and a rep for Cumberbatch described the big day as "truly magical." The intimate soirée was also attended by a handful of celebrities, including Cumberbatch’s War Horse co-star, Tom Hiddleston, as well as his close friend and Sherlock co-star, Martin Freeman.

She is a mom of three.

She originally had no interest in marriage or kids.

Hunter wasn’t always interested in starting a family, let alone getting married. In fact, she once told Daily Mail, "To be perfectly honest, I can't imagine getting married. I've got a lot to do before I have children— they are way off." If only she could see her life now...