Take a Look Back at Bella and Edward's Ethereal "Twilight" Wedding

One decade down, an eternity to go. 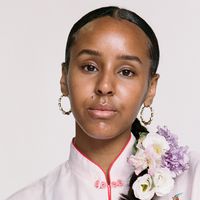 Sumiko Wilson
Sumiko Wilson is an Editorial Intern at Byrdie. As a skin, hair, and beauty enthusiast, she likes to explore where beauty intersects with pop culture and social issues. She's currently a journalism student at Ryerson University, due to graduate in December 2021.
Brides's Editorial Guidelines

Happy anniversary, Bella and Edward! This week marks ten years since the release of The Twilight Saga: Breaking Dawn – Part 1, which means that everyone's favorite immortal couple, played by Kristen Stewart and Robert Pattinson, would be celebrating their silver anniversary this year.

Whether you were a Twihard, Twi-neutral, or completely indifferent to the YA series-turned-billion-dollar film franchise, it’s impossible to overlook the grip Twilight had on pop culture. Of course, Pattinson and Stewart’s IRL romance likely added to the frenzy, which lasted from the release of the first film in 2008 to the premiere of the fifth and final portion of the saga in 2012.

It's hard to believe a decade has passed since Bella and Edward tied the knot in an ethereal, backyard ceremony that captivated moviegoers and inspired endless Pinterest boards. Were the reviews for Breaking Dawn—Part 1 raving? Not quite, but that’s beside the point. The iconic wedding scene makes the entire film well worth a rewatch.

If you don’t recall, the anticipation around the Twilight wedding was major. Long before tweens started camping outside of movie theaters to watch Bella and Edward say "I Do," InStyle commissioned bridal designers, like Monique Lhuillier and Christian Siriano, and wedding experts to sketch their predictions for how the Cullen wedding would pan out. It was that big of a deal. And it wasn’t for naught—in spite of its flaws, Breaking Dawn—Part 1 was the climax of a huge moment in pop culture, and we’re still experiencing the aftershock ten years later. Ahead, we look back on all the dreamy details from the foremost vampire wedding of the century, and how Bella and Edward have continued to impact wedding trends long after riding off into the sunset with Renesmée.

Carolina Herrera was the designer behind Bella Swan's couture wedding gown, and her mantra was to keep things simple—save for one extravagant detail. The dress featured long, lace-trimmed sleeves and a modest V-neck, but the sheer back was where the real wow factor kicked in, with a custom lace motif and 100 covered buttons flowing down to the puddle train.

As an ode to Edward's old age (Pattinson's character was technically over a century old), Herrera created the gown using crepe satin, which designers like Anne Barge are now incorporating into their 2022 designs. "It's not used usually," she said of the material in a 2011 interview with ScreenSlam. "It was something that they used to use in the '20s."

While many attributed the long sleeve, V-neck wedding gown craze to the Duchess of Cambridge, who married Prince William seven months before Breaking Dawn was released, Bella's similar silhouette surely added fuel to the phenomenon. Now, it’s the second most-talked-about wedding gown that Stewart has worn on screen after she recently immortalized Princess Diana's bridal moment in Spencer.

In the first film, Edward tells Bella that the ethos behind the Cullen’s airy, outside-in home is that it’s the only place where they don’t have to hide (remember, these vampires don’t burn in the sun, they sparkle). With that in mind, it’s easy to understand why they opted for an outdoor ceremony.

Tammy Polatsek was the designer behind the nuptials, and she amplified the enchanted, ultra-forestial look of the ceremony with dreamy wisteria, strung from the overhanging trees, an all-white floral arch, and lush greenery lining the aisle.

The soundtrack to the first Twilight film was top tier, with indie and rock songs that became anthems. While subsequent films dabbled into more mainstream music, it was nice to hear callbacks to the original tracks in Breaking Dawn. In fact, one of the most touching scenes in the entire movie occurs when Bella and Edward begin exchanging vows, and their song starts playing. You know the one we mean: “Flightless Bird, American Mouth” by Iron & Wine.

Hardcore franchise devotees know that the song the couple danced to at prom in the first film. It was also handpicked for the soundtrack by Stewart herself, who coincidentally turned it on while rehearsing the prom dance with Pattinson. They both got emotional, and the rest is history. In a 2018 retrospective on the Twilight soundtrack, music supervisor Alexandra Patsavas told Billboard that “the Iron & Wine track ‘Flightless Bird, American Mouth’ was sort of an iconic moment [in the movie].”

But as far as weddings go, the most enduring artifact from the Twilight era is undoubtedly “A Thousand Years” by Christina Perri. Be honest: when was the last time you went to a wedding and didn’t hear this song.

The song doesn't play in Breaking Dawn—Part 1 until the very end of the credits, but in the subsequent film, Breaking Dawn—Part 2, it scores the final moments and basically summarizes Edward and Bella’s love story with lyrics like “I have died every day, waiting for you/Darling, don't be afraid, I have loved you for a thousand years/I'll love you for a thousand more.” Very fitting for our immortal faves. Robert Pattinson and Kristen Stewart have long moved on, but somewhere Edward and Bella are probably still dancing to this.