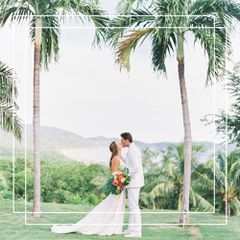 For these two surf lovers, Nosara, Costa Rica, was the perfect place to say “I do.” A village on the Pacific Coast, Nosara is known for its long beaches and fantastic surfing, which attracts wave riders from all over the world. It’s what brought Magdalena Kernan, a wedding photographer and lawyer, and Scott Fisher, also a wedding photographer and school counselor, to the area for their July nuptials.

“The small town of Nosara encompasses our love for travel and adventure and our connection with the ocean and surfing,” Magdalena says.

The New Jersey-based pair collaborated with local planners Fête Urbane and Nosara Weddings for their celebration, which brought together 100 guests at Nosara Beach Hotel overlooking the Pacific Ocean. The couple sought a clean and modern aesthetic, which pulled tropical vibes from the area, and nods to their mutual love of the ocean. But Magdalena admits that wasn’t easy when planning from another country. It all came together, though, and the couple cites one of the favorite memories being the full week they spent with family and friends in the resort town that Magdalena calls “a little slice of paradise.”

“We surfed, ate, drank, ziplined, horseback rode, and spent so much quality time that it still blows my mind it was real,” she adds.

Read on for all the details of Magdalena and Scott’s tropical destination wedding, planned by Fête Urbane and Weddings Nosara and photographed by Lauren Fair Photography.

Barely Blush Ink designed the invitation suite, which included a map of the Nosara coastline, an itinerary of the activities, and calligraphy in white ink.

Home base for the weekend was the Gilded Iguana, a property with direct access to Playa Guiones, one of the best surf breaks in the area.

The small town of Nosara encompasses our love for travel and adventure and our connection with the ocean and surfing.

Magdalena and Scott bonded over surfing and the ocean, but actually met in a gardening class during college. “We planted our seed of love,” Magdalena jokes. Before their wedding festivities began, the pair caught some waves together as their wedding photographer documented their shared passion.

Magdalena wore a lace gown from Martina Liana. “I knew right away when I put it on that it was the one,” she says of gown shopping at Free Love Bridal in Cape May, New Jersey. “It was the right vibe.”

Magdalena paired her gown with a veil, also from Free Love Bridal, and her mother’s blue Cartier ring as a “something blue.”

The couple’s tropical theme really came through in the florals, which included local foliage like monstera leaves, orchids, and anthurium. Magdalena’s bridal bouquet featured those flowers plus classic wedding blooms like roses, peonies, and poppies.

Scott wore a white suit from Asos while his eight groomsmen donned beige linen suits. His sweet touch? A fish-shaped tie bar, a nod to his surname, Fisher.

Magdalena and Scott met for a first look before the ceremony.

The bridesmaids wore beige and tan-colored dresses that they all picked out themselves. “I didn’t stress about it, and it turned out perfectly,” Magdalena says of the final looks.

Together, the wedding party blended in with the hotel's neutral architecture while their floral arrangements (a nod to the surrounding palms!) enhanced the setting.

The couple made sure to get portraits around the property as well, posing poolside and along a statement staircase as they enjoyed time together before the ceremony.

The ceremony took place at Nosara Beach Hotel, where guests were greeted with fresh coconuts and a sign reading “Coconuts For You.”

Guests sat on long benches for the ceremony at the hotel's in-house restaurant, La Taverna, which overlooks the Pacific. A fan was placed on each seat for cool air, though the ocean breeze was likely enough.

We were both so nervous about saying our vows in front of everyone we know but it truly was the most special moment in the serene space.

“They were so special to us,” Magdalena says of exchanging their own vows during the ceremony. “We were both so nervous about saying our vows in front of everyone we know but it truly was the most special moment in the serene space.”

The newlyweds exited the ceremony to Jack Johnson’s “Banana Pancakes.”

Immediately after the ceremony, the couple and their guests headed to the beach to watch the sunset. “It was the most incredible experience,” recalls the bride.

The couple posed with their children attendants and all their guests during sunset, then headed to cocktail hour.

The couple had "his and hers" signature cocktails. Scott’s drink was a hibiscus gin and tonic and Magdalena’s was a passion fruit mojito.

The reception took place on a lawn outside the hotel's La Luna restaurant, where a clear-top tent was set up to overlook the ocean.

Table assignments were displayed on acrylic plaques adhered to a boxwood wall accented with tropical foliage. At the top, the couple added a custom phrase that was a play on their new last name, Fisher.

The night's menu was also displayed on large acrylic signs accented with palm leaves. The reception entrance, which combined more foliage with fresh fruits and wicker baskets, was the exact vibe the couple wanted for their celebration.

The couple’s tented reception exuded tropical vibes. A mix of tall and low arrangements topped the long tables while rattan lanterns hung from the ceiling of the clear tent. Bistro lights added ambiance as did the pineapples and floral chandeliers filled with palm leaves.

Each place setting included a show plate wrapped in a leaf adorned with the guest’s name as well as rattan placemat, gold flatware, and gold-rimmed glasses.

For the reception, Magdalena changed into a Trousseau Style white dress to take her first spin with Scott to “Beyond” by Leon Bridges. They did begin with a “little salsa” but the real surprise was a mother-daughter dance with the mother of the bride. “She never cries and she lost it,” Magdalena says.

After the wedding, Magdalena and Scott honeymooned in Costa Rica. Their number one piece of advice for wedding planning? Hire vendors you trust!