What Is Mirroring in a Relationship?

It's all about body language. 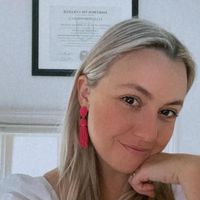 How and When Does Mirroring Happen? What Can It Teach Us? Can Mirroring Help Signal Relationship Challenges?
How Can You Use It? How Can It Go Wrong?

So much of a relationship happens on a subconscious level. Consider the things you love about your partner that you can’t put into words; the actual chemical connection the two of you share; those moments when you just feel totally in sync—those are the things that matter on a deep, emotional level. Have you ever felt like your partner can read your mind, found yourselves completing one another’s sentences, or even walking, talking, and acting in similar ways? If you have, it's a sign of a strong and deep bond, whether you’re newly involved or have been best friends since childhood, and it has a name: mirroring.

Mirroring is a subconscious occurrence that can create a feeling of comfort because humans are evolutionarily designed to be attracted to people who are similar to them. When employed consciously, it plays a huge role in getting to know someone and establishing a level of comfort together.

Mirroring is often discussed in the context of business interactions and pushy salespeople—but the concept actually applies to personal relationships, too. When it becomes subconscious, it’s the thing that sets apart a great friendship or love from all the rest. So how can it be beneficial to your relationships? It all comes down to nonverbal communication, and we’ve turned to an expert to help explain the psychology behind this concept.

“To put it simply, mirroring is matching someone’s behavior, whether it’s their voice, their words, or their non-verbal cues (think gestures, movement, and body posture),” explains body language expert Tonya Reiman. "Particularly between two people of the same gender, you can even experience people matching pitch, tone, blink rate, and breathing.”

Tonya Reiman is a well-known body language expert, author, and speaker. She has a degree in psychology and covers everything from the importance of body language in dating to jury consultation.

How to Practice Reciprocity in Relationships

How and When Does Mirroring Happen?

So how does mirroring kick in? “It’s the process of, either actively or subconsciously, replicating another person’s behavior,” Reiman explains. Take a job interview, for example. If you’re nervous, you might be inclined to avoid eye contact or act a little closed off. However, if you attempt to mirror your interviewer, you’ll come across as confident and form a connection with the person you’re speaking to—which will, in turn, help you feel more comfortable. You might seat yourself in a similar posture, or scratch your arm when they reach up to scratch their eye, creating a connection between you non-verbally.

And of course, it plays a role in those first romantic meetings, too! “When you’re trying to pick someone up at a bar, it’s an intentional technique,” Reiman says. “You might observe how a person is standing and moving, then implement the same movements and posture to signal that the two of you are similar, which implies that you belong together. In the basic landscape of any relationship, we’re drawn to the feeling of being in sync.”

What Can Mirroring Teach Us About Our Romantic Relationships?

If you’re in a long-term relationship, mirroring isn’t an active practice as much as it is an outward reflection of your connection. “For an established relationship, mirroring is something that happens naturally,” says Reiman. “If you and your partner are holding hands and walking down the street, you are most likely walking on the same foot at the same speed. You’re in tune with one another and matching your partner’s gait—that’s mirroring.” Mirroring causes a flood of what Reiman calls “love chemicals,” a burst of good feelings that make you feel closer to the other person, strengthening your bond and contributing to the solid foundation a lasting relationship needs.

Mirroring can help you get to know one another early on, but once you’re beyond the honeymoon phase, it should be organic. Not feeling it? Use this as an opportunity to take a look at where your relationship stands. “For example, if you and your partner used to hug very closely—with your bodies touching, rubbing one another’s backs—and now you’re only hugging with the tops of your body, you’re losing intimacy. It’s a signal that something is off in your relationship,” Reiman explains. Ask your partner if they’ve noticed a change in your rapport with one another. “If you both notice the disconnect, you’re in a position where you can work together to rebuild it,” she continues. “Whether it’s a romantic relationship or a friendship, I always start by encouraging a pair of people—people who are both interested in rebuilding the rapport—to sit in the same position and look into one another’s eyes for three full minutes.”

Yes, that’s a long time to stare at your partner, but it’s also rebooting that mirroring. “You’re sitting in the same posture and looking at one another at the same time, which causes brain chemistry to get going again. It’s an unconscious feeling of rapport, but one that’s set up consciously.” Why does it work? “Gazing at one another like that creates a vulnerability that few of us are willing to open up to. That vulnerability is the difference between wanting to and trying to fix your relationship and saying ‘well that was fun’ and calling it quits.”

How to Be More Vulnerable In Your Relationship

How Can You Use Mirroring to Build Strong Bonds?

When it comes to marriage, you and your partner might already be subconsciously mirroring one another, but that’s not the only relationship you need to build. You’re also in a position where you’ll be building connections and bonds with other people in your partner’s life—namely your in-laws. “The first time you meet your mother-in-law, for example, spend the first few minutes listening actively. Get rid of your filters and your own ego, and try to step into her shoes,” says Reiman. “If you can get out of your own way, you’ll get a feel for her and may be able to automatically regulate your behavior and posture to get into a rapport with her.”

It takes practice, but active listening will clue you into the language she’s using or the way she’s sitting, and you’ll be able to start to connect. “When we talk about rapport-building, it’s all about helping Person A (in this case your mother-in-law) become so comfortable in his or her own skin that Person A can really open up to Person B (that’s you!), and then Person B becomes comfortable and creates a bond.”

How Can Mirroring Go Wrong?

Sounds great, right? Like just about everything, mirroring does have a downside—which brings us back to that pushy salesperson. “Mirroring can also be manipulative, which is why you might feel uncomfortable if a salesperson starts acting like you in order to make the sale,” Reiman explains. Yes, we’re designed to be drawn to people who are like us, but we also all have that gut feeling of when someone is building false confidence and trying to get us to do something we don’t want to do.

“If the other person’s mirroring isn’t leading you to a comfort zone, but instead leading you somewhere you don’t want to be, that’s a red flag. They’re making you feel like you need to like them, instead of like you want to,” she continues. “Mirroring should help to get you out of your shell early on, but once you’ve shared any sort of intimacy with one another, if your non-verbal actions aren’t matching and instead the mirroring is being forced, that’s a sign that you’re probably not meant to be together.”

What Is a Twin Flame? 8 Signs You've Met Your Match