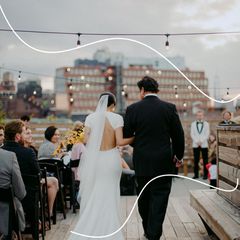 The Ultimate Guide to the Wedding Processional Order

We're breaking down the processional orders for different types of weddings in this guide.

The bride's walk down the aisle is always one of the highlights of a wedding ceremony, but a few other important people like members of the bridal party, the mother of the bride, and officiant prep the runway before the headliner in the white dress makes their grand entrance. Different types of weddings employ different processional orders, so we're breaking down who should walk when to familiarize yourself with the different possibilities and to ensure your bridal march runs as smoothly as possible.

What Is the Wedding Processional?

The wedding processional refers to the group of people walking down the aisle in a specific order to mark the beginning of a wedding ceremony. The processional often includes a permutation of the officiant, the wedding party, flower girls, ring bearers, and the bride and groom and their parents.

Aside from the processional order, which people are involved and where they are seated vary depending on the type of religious wedding service. "Both Hindu and Jewish ceremonies include more family members than traditional or nondenominational ceremonies," says Victoria Miller of LUXE Atlanta Events. Jewish weddings, for instance, have both parties' grandparents walking down the aisle. While for Hindu weddings, the parents are more involved in the processional and the bride's parents even sit with them under the traditional mandap.

FAQ
An Easy Breakdown of Wedding Ceremony Outline
more in