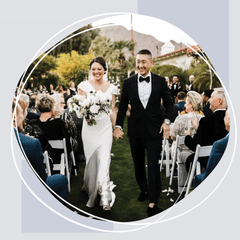 Focus on your VIPs first.

While wedding reception seating can sometimes feel like a complicated game of Tetris, wedding ceremony seating is typically more straightforward. What’s even better? As with most aspects of a modern wedding, there’s no one right way to do it. “If you’re in a more casual space, you can pretty much decide what you want,” says event planner Aimee Dominick.

Whether that means adhering strictly to tradition or mixing things up to make them your own, all that matters is that those you care about most are present to witness you exchange vows. Still, it’s always helpful to have a starting point for planning purposes. Read on for everything you need to know about wedding ceremony seating.

Who Sits Where at the Ceremony?

The most attention and effort should be paid to where the VIPs of the wedding will sit: parents, grandparents, close family members, and if they won’t be standing at the altar, the bridal party.

In the most traditional Christian, heterosexual weddings, the bride’s parents sit in the first row on the left side of the aisle, while the groom’s parents will fill in the first row on the right side. In a Jewish wedding, this formation is flipped: The bride’s family is placed on the right, while the groom’s family is on the left. In some Jewish Orthodox and Muslim wedding ceremonies, attendees are divided by gender.

In families with step-parents, the most traditional arrangement is to have the mother, her spouse/partner, and any other close relatives of hers take the first row, while the father and his group take the second row. If the parents are on good terms, it’s perfectly fine to sit them both in the first row, albeit usually not right next to one another. “A buffer of their spouses, or an aunt or a grandparent, works well,” Dominick says.

When it comes to attendees beyond the VIPs, guests of the bride have traditionally filled in on the bride’s side, while guests of the groom have filled in on the groom’s side. But mingling is encouraged more and more these days, so don’t worry too much if guests mix between sides—especially because it makes for better pictures if there’s an even distribution across the aisle.

Who should have a reserved seat at the ceremony?

Anyone walking down the aisle—parents, grandparents, etc.—should have a reserved seat at the front of the ceremony, as should anyone who is doing a reading during the ceremony. (Readers should be seated on the aisle.) The dates of these guests should also be given a reserved spot next to them.

Instead of placing generic “reserved” signs on the aisle entrances, Dominick recommends labeling specific seats with specific names to avoid confusion. (This also prevents third cousins from taking a seat in the family section that should really go to a grandparent.) In ceremonies done with individual chairs instead of benches or pews, Dominick often lays the first few rows with the exact numbers of seats necessary for VIPs to avoid any empty spots.

Be sure to leave a program on the seats of guests who will be walking down the aisle because they won’t be handed one otherwise.

When should VIP guests be seated?

In a traditional heterosexual, Christian wedding, this happens after guests are seated, but before the formal processional. As a general guideline, the person closest to the bride comes down the aisle closest in order to the bride. That means the grandparents of the groom go first, followed by the grandparents of the bride. Next up: the mother/parents of the groom, followed by the mother of the bride. After that, the formal processional kicks off, often with the groom and groomsmen entering from the side of the altar. (The groom may also choose to escort his mother/parents down the aisle before taking his place at the altar.)

How should ushers escort guests to their seats?

While the necessity of ushers at modern weddings is up for debate, more traditional weddings do often still make use of the role. If a wedding has designated sides for each member of the couple, the usher should greet arriving guests and ask which side they’re attending the wedding on behalf of. The usher should offer their arm to female guests and escort them to a row on the appropriate side that’s closest to the front but still has seats available. (If the female guest is attending with a male date, the male will walk behind the usher and the woman.) In a wedding in a large church, such as St. Patrick’s Cathedral in New York City, guests of a certain importance level may be sent pew cards in their invitation indicating exactly where they should sit. In those instances, an usher would escort the guest directly to their designated pew.

Select a seating arrangement that aligns with your wants and needs.

If you’ve always envisioned a long, dramatic walk down the aisle, a larger amount of shorter rows is the way to go, whereas the curving nature of a semi-circle formation encourages a more intimate feeling. “If you’re having a bigger wedding and you don’t want the last row to feel like the last row, this is a good option,” Dominick says.

An in-the-round ceremony is also a striking visual, but it requires certain sacrifices to effectively pull off. “This is really pretty if you’re okay with your bridal party sitting,” Dominick says. “If they stand, they’ll inevitably block someone’s view of the couple.”

Make sure seating is comfortable.

Though rustic hay bales and boho floor cushions look beautiful on Pinterest, think about your guests. “If you showed up in a dress, you really don’t want to have to sit on the ground,” Dominick says, who encourages a similar line of thinking when it comes to benches: “If you have an older crowd, they might not be thrilled about not having a back to lean on.”

While lush aisle arrangements help any ceremony feel more memorable, they shouldn’t come at the expense of your guests. “If you have things that are really tall, you want to be sure they aren’t blocking site lines of the ceremony,” Dominick says.

Guests with young kids should not sit on the aisle.

If there’s a risk a young guest might cry during the ceremony, the guardian of that child should sit on the end of the row farthest away from the aisle, and, whenever possible, closer to the back of the ceremony. That way, they can exit the space as quickly as possible should a fuss occur.