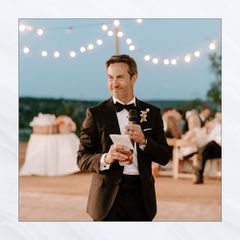 How to Write a Rehearsal Dinner Toast

When done right, rehearsal dinner speeches are fun, breezy—and, sometimes, a little raucous—odes to a marrying couple. So, why can they sometimes feel so hard to write? “The problem is that we have many years of thoughts, memories, and feelings about a bride or groom banging around in our head, and it feels like chaos,” says professional wedding speechwriter and strategist Den Pope. “Other than feeling a great sense of love and pride, it’s hard to define the relationship because you’ve never really had to think about it.”

Chicago-based Den Pope of Nailyourspeech.com has been a professional wedding speechwriter for over 22 years. His work and advice have been spotlighted by Vox, NPR, and Daily Mail.

Still, it’s worth it to take the time and distill those thoughts, because rehearsal dinner toasts are a great opportunity for those closest to the couple to honor that couple and create lasting memories for them on a special occasion.

If you’re up to the task, read on for everything you need to know about giving and writing a killer rehearsal dinner speech.

Who Gives a Rehearsal Dinner Toast?

The host of the rehearsal dinner (traditionally the father of the groom in a heterosexual couple) gives the first speech. This person is followed by members of the wedding party that won’t be speaking at the reception (typically anyone other than the maid of honor and the best man). Last up: additional friends and family if an open mic situation is encouraged.

A great rehearsal dinner speech includes the same core elements as a wedding reception speech. Here’s a template to follow to get you started on the process.

If possible, get introduced by someone else.

“It’s always better if there’s a master of ceremonies or DJ to introduce the speaker,” says Pope. “Otherwise, there will be throat clearing and empty platitudes right at the open when you should be grabbing the audience’s attention.” If there’s no emcee, go with something short and sweet: Hi everyone, I’m Maura. Brittany and I met as Theta pledges our freshman year at Mizzou. Then dive straight into the speech.

Tell a story that gets at their core values or personality traits.

Per Pope, the main goal of any great rehearsal dinner speech is to “to give an inside look at the bride and/or groom—their defining values, characteristics, and personality traits—through the speaker’s eyes.” That’s best accomplished by a narrative that’s heavier on showing rather than telling.

Instead of stating that Brittany is spontaneous, for example, share an anecdote about the time she booked a flight overseas on one day’s notice, or when she jumped into a pool at a college house party.

After sharing your anecdote, take a quick moment to address that person directly. Brittany, that brings me to one of the things I’ve always loved most about you: your spontaneity.

The characteristics and anecdotes you choose to address should next segway into a moment of recognition for the other half of the couple. “Tease out what makes their relationship work,” says Pope. “Define them, then bring them together.” Maybe Brittany’s fiancé James is just as spontaneous, and they met while sky-diving. Or, maybe he likes to have every hour of his day planned, but they’re the penultimate example of opposites attracting. Either way, you’ll want to explain why the characteristics you mention in your speech make them a great couple.

End with a quick toast.

“Wrap it up quickly,” says Pope. “No poems, no 16th-century quotes.” A go-to approach: And now, everyone please join me in raising a glass to Brittany and James for a life filled with X, Y, and Z. Two of those three sentiments can be universal (love, joy, laughter, adventure, happiness), but the last should tie back to something referenced earlier in the speech.

Here are Pope’s best tips for writing and delivering your rehearsal dinner speech.

While the father of the groom/rehearsal dinner host’s speech should serve as an emotional counterweight to the speech the father of the bride will give at the reception the following night, it’s okay if the rest of the speeches are a little more insider-y and casual. The group at the rehearsal dinner is the ultimate “in crowd” of any wedding, so they’ll be the most invested in what you have to say about the couple, and the most likely to understand or appreciate any inside jokes.

Write it early, but rehearse later.

Some of Pope’s clients come to him a full year ahead of a wedding. While they may settle on content in advance, he doesn’t encourage revisiting the speech until about two months ahead of the big day. And even then, he advises against over-rehearsing. “You’ll sound robotic and unnatural,” he says.

Open with something interesting and unexpected.

“All the audience wants to hear is what you have to say about the bride and groom as an insider,” says Pope. If you can do that, then you’re guaranteed to capture the attention of the crowd.

Keep your role in mind when considering timing.

The longest speech, which should be kept under 10 minutes, should be reserved for the host of the rehearsal dinner. Bridesmaids and groomsmen should be shorter—seven minutes and below—and anyone jumping on an open mic should wrap up in under five.

But, other than that, less is off the table than what you might think. “Some might think that gambling is off-limits,” Pope gives as an example. “But, if the story exemplifies the person in a positive way, and everyone in the room knows that [the person] does it, then it can be fun in for your speech.”

Address the couples’ relationship through your eyes.

“It doesn’t matter if anyone in the room agrees with you or not,” says Pope. “This is your speech. It’s your time to say what you want. Don’t think you have to fluff the couple up dishonestly to please the crowd.”

Read from your phone if that’s what feels most natural.

The best speeches are relaxed and authentic. If reading off note cards will make you feel like you’re giving a stuffy class presentation, don’t do it. (But if you don’t want to squint and scroll, download a flashcard app like Flashcards Deluxe.) And, of course, make sure your phone is fully charged.

Don’t hold your glass during the speech.

It will serve as a distraction, especially if you’re also balancing a mic and your notes. Place it near you on a table or have someone hand it to you at the end.

Be sure to actually sip after you raise your glass.

That seals the deal of the toast. (And yes, it’s perfectly fine to toast with water!)

Not sure how to begin mining a lifetime of memories for your rehearsal dinner speech? Here are a few questions to help whittle things down.

Pope strongly advises against Googling for one-size-fits-all or fill-in-the-blank examples of rehearsal dinner speeches, as they can lead to hollow, canned, and impersonal toasts. Instead, he encourages his clients to think deeply about the most meaningful memories they associate with the subject of their toast, and to build their speech out from there. An example from Pope of how that process works to inspire a speech follows below:

"I wrote a matron of honor speech where the bride was her maid of honor three years ago. I asked if she gave a speech, and what that speech was like. She said, 'You know, the day was a blur. The only thing I really remember was that she quoted Dr. Suess.'"

"So, we opened with that: 'Welcome. This brings back fond memories of my wedding day, where [Brittany] gave a speech. The day was a blur, but I remember one thing very clearly. She quoted Dr. Suess: “We are all a little weird, and life is a little weird. And when we find someone whose weirdness is compatible with ours, we join up with them and fall into mutually satisfying weirdness and call it love.” I didn’t get it at the time, but I’ve been waiting for your wedding day to say one thing: Brittany, you’re weird.'"

A Guide to Rehearsal Dinners