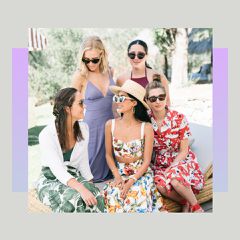 How to Plan a Bachelorette Party

While there are many opportunities to fête a couple and married life during the wedding planning process, only one event focuses on celebrating the bride and the bride alone: the bachelorette party. The bachelorette party has also evolved from a low-key dinner or luncheon held the day before the wedding into a full-blown destination weekend, complete with matching swimsuits, private boat charters, and its own hashtags.

What Is a Bachelorette Party?

A bachelorette party is a gathering held in honor of a woman’s upcoming marriage. It is typically attended by the bride’s closest friends and family members.

“Traditionally, the joke is that the bachelorette is your final night of freedom,” says pro bachelorette party planner Allison Odhner, who notes that the rise in popularity of the concept coincided with the women’s liberation movement of the ’60s. “But it’s evolved into women celebrating other women and a reason to spend quality time with your favorite people.”

Allison Odhner is the founder and lead planner of Philadelphia-based Bach to Basic, an all-inclusive bachelor and bachelorette party planning business featured in the New York Times, Bloomberg, and Cosmopolitan.

Wherever your ideal celebration falls on the spectrum, read on for everything you need to know about how to plan a bachelorette party.

Bachelorette parties may be all about fun, but etiquette questions still come up. Here are answers to the most frequently asked questions.

Who throws a bachelorette party?

A bachelorette party is traditionally planned by the bride’s maid of honor, a small group of bridesmaids, or a small group of close friends, but there are no set rules here! It’s perfectly fine if the bride wants to handle planning herself. “The most important thing to remember is that lots of opinions quickly become a disaster,” says Odhner. “It’s best for one or two people to lead the planning, and the rest should try to go with the flow as much as possible.”

When do you hold a bachelorette party?

There are no set rules here, either—different seasons are better for different destinations—but Odhner says most bachelorettes occur one or two months before the wedding.

Is it OK to plan it over a holiday weekend?

While hosting your wedding during a holiday weekend can be a controversial move, it’s generally more accepted for bachelorette parties because the event involves a smaller group that’s more intimately connected to the bride. But while it’s nice for the group to not have to take an extra vacation day, airfare and hotels can be more costly during a holiday weekend, so you’ll want to weigh priorities accordingly when selecting the date.

How involved should the bride be in planning?

If someone other than the bride is taking point on planning the bachelorette party, they should get the bride’s input up front. “Ask if they have a specific destination and dates in mind as well as activities or specific things they’re interested in doing,” says Odhner. “From there, it’s your responsibility to take the bride’s vision and bring it to life.” Meaning, a few questions here and there are okay, but don’t drag the bride too far into the logistical weeds. She’s got a wedding to plan, after all!

Who gets invited to a bachelorette party?

This is the bride’s decision. Some brides will want just their bridal party there while others will extend the invitation to a larger circle of family, friends, and even members of their partner's inner circle. Either way, people that are invited to the bachelorette should also be invited to the wedding, and gender shouldn’t prevent anyone from making the guest list.

Do you need to send formal invitations?

Formal invitations are not necessary for a bachelorette party. “Often, it’s just an email,” says Odhner. “Nothing too formal, nothing too cute, just something focused on logistics and general information to get a feel for who can attend.” After key details and the confirmed guest list are set, however, a more official e-vite or paper invitation can be blasted out to get the group excited about attending.

Who pays for the bachelorette party?

Occasionally, a maid of honor or sister might cover the bride’s trip entirely, but what’s more common is for the entire group to chip in to cover the bride’s portion of a specific activity or meal during the getaway.

Should there be party favors?

While not mandatory by any means, bachelorette party favors like tumblers, mugs, fanny packs, and personalized attire have become increasingly popular over the last few years. “Something they’ll use throughout the weekend is great,” says Odhner, who typically arranges for the favors to be set out at arrival or distributed at the beginning of the events she plans.

Steps to Planning a Bachelorette Party

If you've been tasked with planning the bach party or weekend, you'll want a roadmap. Here's a seven-step to planning a bachelorette party.

“This is the perfect excuse to get all your favorite people together,” says Odhner, who advises brides to decide who their core bachelorette attendees will be before determining a location. Group size will impact decisions about lodging and activities.

Several factors go into selecting a bachelorette destination. The first few—climate, vibe, and activity preferences—are obvious. Do you want hot or cold weather? Do you want it to be alcohol-free? Do you want to party in a club or relax in a secluded cabin? Do you want to go hiking in the woods or hit up fancy restaurants in a big city? Asking these questions will help whittle down options. From there, you’ll also want to consider your time of year and the cost of flights. If two destinations offer similar amenities but one is less expensive to travel to, your decision can sometimes be made for you.

3. Figure out your date

The host of the bachelorette party should work with the bride to select two to four dates that work best for her. From there, Odhner recommends using Doodle.com to quickly and easily poll invitees on which of those dates they would and would not be able to attend. The final date can be selected from there.

For the best options in accommodations and lower travel rates, Odhner recommends selecting your date and destination at least six months in advance.

For destination bachelorette weekends, Odhner recommends a group house rental over hotel rooms almost every time. “If it’s a large group—15 to 25—you may need to expand your search slightly outside of a city and realize you’re going to be spending time at the house,” she adds.

If you’re going the hotel route, Odhner suggests booking at least one suite. “That way there’s a communal place for people to pop in, have a glass of Champagne before they head out, or just hang out in during the morning,” she says. Because lodging is the bulk of the expense for a bachelorette weekend, it’s a good idea to ask invitees for the range they’re comfortable spending per night ($0 to 100, $100 to $200, $200 to $300, $300 and up) before booking your accommodations.

For a regular two-day weekend, Odhner recommends two to three activities, plus some pre-scheduled downtime. “Whether it’s the night you arrive or a full day if you’re staying three days, there’s nothing wrong with [hanging out] at your house rental pool or doing something more low-key,” she says. Beyond hitting up clubs and bars, bachelorette activity options often include boat charters, spa activities, outdoor picnics, private yoga and fitness classes, walking tours, and group classes like candle-making or cooking lessons.

If you’ll be heading out to dinner or brunch with a large group, there are certain steps you can take ahead of time to make handling the bill less of a headache. “See if the restaurant is willing to put together a limited menu for the group that’s a set price and includes a certain number of drinks,” Odhner suggests. If that’s not possible, she recommends announcing at the beginning of the meal that the bill will be split evenly, and everyone should take that into consideration when placing their orders.

Four months ahead of the bachelorette, the host should have a good idea of base costs for lodging and activities. At this point, it’s a good idea to get back in touch with the group and share estimated costs, so invitees can make their final decisions about attending. Make it clear that attendees will still be on the hook for their portion of these expenses if they cancel after a certain date.