How to Start Planning Your Bucket List Patagonia Honeymoon 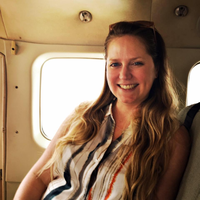 Rugged, remote and breathtakingly beautiful, the Patagonia region of South America has rightfully earned its place in the pantheon of must-see destinations for adventure seekers and nature lovers in general. And while you can camp and hike your way through different sections of Patagonia, which sprawls across large swaths of Chile and Argentina's southernmost territory, the good news is that you don't have to tent it on your honeymoon (unless, of course, you want to). Even better news: if Patagonia is a bucket list destination for both you and your fiancé, this spectacular corner of the world is more readily accessible than you might have imagined.

While Patagonia is closer to Antartica than just about anywhere else on the planet (yes, you might see penguins), some of the region's most famous treasures—including the glacial fjords of Chilean Patagonia and the craggy peaks and scenic vistas of Torres del Paine National Park—are now just a couple flights away, thanks to new connections between Santiago, Chile, and Puerto Natales, a small port town that's considered the gateway to Torres del Paine and a main departure point for Patagonia expeditions by land and sea. Ready to start planning the Patagonia honeymoon of your dreams? Here's what else you need to know.

South American airline LATAM offers direct overnight flights to Santiago, as do several major U.S. carriers, from airports including Atlanta, Miami, Dallas, Houston, and New York City. While the flight is long (8-10 hours), the good news is that when traveling to South America you'll never have to deal with jet lag. At most, time zones only change by a few hours—no different than what you'd otherwise experience when traveling within the States. LATAM's service into Puerto Natales aligns with Patagonia's peak travel season, which runs from December through February, aka summertime in the southern hemisphere (airfare for the 2017-18 season goes on sale in July).

The closest hotel to the airport also happens to be one of the region's best. A mix of new construction, modern amenities and luxurious details that blend seamlessly with the property's industrial heritage, The Singular Patagonia is an ideal home base for your Patagonia honeymoon. Located on the grounds of a nationally recognized landmark building—a cold-storage structure that was built between 1912 and 1914 and was in operation until the 1970s—the property offers a fascinating glimpse into what life was like in Patagonia in the early 20th century.

Elevated, well-lit walkways help guests to navigate the cavernous spaces of the sprawling warehouse complex, which still contains some of the original industrial machinery; the property is also a museum. Rooms, however, are completely modern and all come with panoramic, floor-to-ceiling views of the Almirante Montt Gulf, one of the main waterways of Chilean Patagonia, as well as deep-soak bathtubs and chic and cozy furnishings. Also on site: an elegant yet informal restaurant featuring such specialties as Chilean lamb and locally-caught seafood and king crab, as well as an extensive Chilean wine list; the property also features a full-service spa and a heated, indoor-outdoor swimming pool that overlooks the gulf.

By land, by sea, on horseback, on foot—your options for immersive Patagonian expeditions are plentiful and can be fully tailored to your interests, as well as difficulty level. One honeymooning couple raved about their guided, 8-mile hike through Torres del Paine National Park, although shorter, less strenuous hikes (which are just as scenic) are an option, too. The Singular has an activities desk that can arrange for whatever local adventures pique your interest, including cycling, horseback riding, fly fishing, even an open-topped 4x4 photography tour.

For a different perspective of Patagonia's majesty, a fjords cruise is a must (weather permitting). One of The Singular's signature expeditions is the Patagonian fjords cruise that includes visits to Serrano and Balmaceda glaciers, a short morning hike, as well as a traditional Patagonian lunch at the Singular's private ranch. It also includes options for an afternoon horseback ride, an exploratory trek through the rugged terrain, or just relaxing and enjoying the comforts of the ranch home.

Since you'll be flying through Santiago in both directions, why not take a few extra days to explore the Chilean capital? Cosmopolitan Santiago is the perfect counterpoint to the rugged and remote beauty of Patagonia; a Santiago stopover is a chance to experience Chilean culture from a completely different perspective, one that will have you appreciating both destinations all the more.

A sprawling city of 5.5 million, the best way to take advantage of only a few days on the ground is to opt for a hotel that's centrally located, and you can't get more central than Santiago's charming Lastarria neighborhood, located adjacent to Santa Lucia Hill, the precise location where Santiago was founded in 1541. An easy stroll through the hillside park rewards with panoramic city views, as well as glimpses of the majestic, snow-capped Andes mountains in the distance. Dining options are plentiful in the pedestrian-friendly neighborhood; Bocanáriz, a casual wine bar and gastropub, is a favorite with locals and visitors alike, while Restaurant The Singular at the sister property in Santiago has a farm-to-table ethos. For a deeper dive into Chilean culture, Upscape Travel offers guided tours of Santiago's colorful food markets, as well as a full-day tour exploring Santiago's highlights. As a special occasion splurge, Upscape's intimate winemaker's dinner is honeymoon-worthy, indeed.

Everything You Need to Know About Honeymooning in Iceland