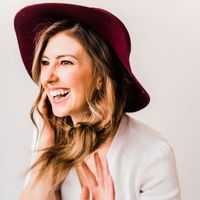 Jillian Kramer is an award-winning freelance writer and editor with over 10 years of experience in print and digital media. Her writing has appeared in Food & Wine, Glamour, and SELF.

Hayley Phelan just knew Chris Black would propose at the fancy dinner they had planned on the first evening of a trip to Miami in August of 2013 — so imagine her surprise when her boyfriend of eight years popped the question as they unpacked in their hotel! "I turned around and saw him on one knee!" she recalls.

A year later, on August 23, 2014, the couple married in front of 165 guests at The Bowery Hotel in New York City, an elegant yet laid-back wedding that matched their easy-going personalities. "We're not fussy people, so we wanted it to be pretty basic, but still beautiful and special," Hayley says of their understated affair.

Photographer Samm Blake captured each classic detail, planned by Ashley Jackson Events, for you to indulge in below.

Hayley's Lanvin gown was business in the front and party in the back. To keep all eyes on the dress's superstar bow, Hayley added classic gold Manolo Blahnik pumps and pearl earrings and carried a bouquet of white-and-blush roses with various greens.

"I wanted all my bridesmaids to pick their own dresses, and they did a great job," says Hayley, whose only requirement was that her 'maid chose dresses in hues of champagne, pink, and blush. Their heels were as varied as their dresses.

The couple's florist, BRRCH Flowers, "made each bridesmaid's bouquet slightly different but all were in our color palette and all were gorgeous," says Hayley.

After a heartfelt ceremony, where the officiant read what Hayley and Chris had written about each other and their relationship months before, guests and the new husband and wife headed to the reception. There, they were greeted by four banquet tables decked with taper candles and organic centerpieces made from blush and white blooms.

In addition to their Momofuku cake, the couple served guests cookies and doughnuts after dinner.

Hayley and Chris toured Italy's Amalfi Coast for their honeymoon before returning to New York. "It's certainly a whirlwind and it takes time to adjust to the idea that your wedding is behind you, not in front of you like it has been your whole life," reflects Hayley. "But being married is awesome."