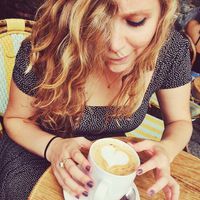 Morgan Gibson
Morgan Gibson is currently the digital content manager at WeddingWire. Previously, she was the digital editor at Brides.
Brides's Editorial Guidelines
0:51

Michael Phelps and his wife Nicole Johnson have done it again! The newlyweds celebrated their marriage for a third time with a New Year's Eve wedding reception so glamorous and glitzy, it puts the roaring 1920s to shame.

Avid Phelps fans will recall that this is not, in fact, their first wedding. Mr. and Mrs. Phelps first said "I do" in an intimate five-person ceremony in their backyard in Tempe, Arizona, on June 13, then followed that up with a wedding for 50 of their closest friends and family in Cabo San Lucas, Mexico, on October 29.

So in order to celebrate with all their loved ones, the Olympic swimmer and his new wife hosted a big, black-tie wedding celebration at the historic Arizona Biltmore, A Waldorf Astoria Resort to ring in the new year and close out 2016—which, need we remind you, was an epic year for them: They welcomed their first child, Baby Boomer, in May; Michael competed in his fifth and final Olympics in Rio de Janeiro, Brazil, where he won his record-breaking 23rd gold medal; and, of course, they got married.

So, why the multiple celebrations? "We both come from great families and have a lot of friends so it was a challenge trying to figure out how we could include everybody," Nicole reveals to Brides. "As we talked through a lot of different ideas, we just kept coming back to the idea of doing a small and intimate wedding in Cabo, and hosting a larger celebration at home so we could include all of our family and friends."

It's clear that for this elegant, Gatsby-themed celebration (put together with the expertise of the planners at Victoria Canada Weddings), the newlyweds pulled out all the stops. See all the glitz and glam in the exclusive photos, captured by Boone Studios.

For the Cabo wedding, Nicole stunned in a form-fitting Julie Vino gown. So for this all-important event, the bride tapped the same designer, opting for a body-conscious embellished gown with illusion sleeves and flowing train that was the epitome of New Year's Eve. "When I saw it for the first time I knew it was perfect," Nicole reveals about her second wedding dress. Michael wore a traditional black tuxedo.

The cake featured two flavors of chocolate with peanut butter and vanilla bean buttercream with Reese's cups sprinkled on top, as well as vanilla with strawberry buttercream and strawberry purée. They also served a sundae bar.

The black and gold details and MN monogram design, as seen on their towering confection, were weaved throughout the couple's celebration.

According to Nicole, the couple wanted food to be served "all night so that our guests wouldn't go hungry from all the dancing!" And with this menu, created by Atlanta's RX Catering, we can't imagine anyone was hungry afterward. They served everything from finger foods and small dishes to some of their favorites, like penne Arribiata with chicken, Bulgogi beef short rib tacos, sloppy joe's, waffle fries, chicken fingers, grilled cheese, and—what we assume is a nod to Michael's home state of Maryland—potato chips with Old Bay seasoning.

"We wanted a fun flow, and had lounge seating and high and low tables to allow guests to mix, mingle and meet!" Nicole shares, revealing that they even played the wedding video from their destination ceremony for their New Year's Eve guests.

Speaking of special guests, look who made an appearance! Decked out in a tux and armed with his baby-protecting headphones (there was a live band, after all!), baby Boomer (who served as ring bearer in their Cabo wedding) hit the dance floor at his parents' celebration. "Within an hour he was passed out!" Nicole says.

While the couple is undecided on a honeymoon locale, Nicole revealed that they'll be bringing their little one along for at least part of the adventure. "We'd like to take a few weeks to travel around so we will most likely be alone for half and with Boomer for half," Nicole says.

Now that their epic year of weddings, the Olympics, and starting a family has come to a close, we can't help but wonder if an even bigger family is in this couple's near future. "We would love to grow our family one day, but we have had so much going and are just enjoying our time with Boomer right now!" Nicole says. "We’ll see what the future holds."

"We know that 2016 was a year that would be hard to replicate," Nicole says. "We look forward to a new year and building our family for many years to come. We know that the future will be bright and we are thankful to have celebrated with so many of our loved ones!"