Why Mauritius Should Be Your Next Indian Ocean Honeymoon 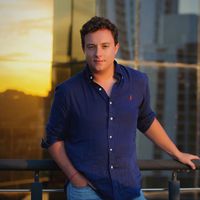 The Maldives have topped honeymooners’ wish lists for years, thanks to the many celebrities who have vacationed there with their own significant others—Victoria Beckham, Mariah Carey, Kate Moss, Beyoncé, and even Kate Middleton have all visited the archipelago for romantic trips (remember when Kim Kardashian famously lost a $75,000 diamond earring there after then-fiancé Kris Humphries threw her into the water? That was in the Maldives). With white-sand beaches, pristine waters, and your in-laws approximately 9,000 miles away, this is a top-notch honeymoon destination.

But the very things that make the Maldives fantastic can also be their downfall. For the most part, each resort inhabits its very own minuscule island, or atoll. So while there certainly is a novelty in having to take a boat or plane from the capital airport Male to your resort (which after a 20+ hour journey from the States might only add to your exhaustion), keep in mind that you will pretty much be committed to staying at your resort for the duration of your stay. Although properties make sure that guests have plenty of things to do by way of watersports, spa appointments, and fine dining, many who travel to the Maldives complain that after maybe three days, they simply run out of things to do. In some ways, it can feel like a Disney World for luxury travelers. Furthermore, as a predominantly Muslim nation, most native Maldivians are not allowed to serve or be in the presence of alcohol for religious and cultural reasons. So to continue our Disney World analogy, many hotels bring in their staff from other countries—an operational reality that tends to negate a resort’s sense of place. The staff with whom you interact are simply not as invested, knowledgable of, or passionate about the place you are visiting.

Let’s be honest, most honeymoons require a little more than pleasant weather and some privacy for the newlywed couple. So if picturesque beaches and otherworldly overwater bungalows are what you’re after, the Maldives is a perfect option for you. But if you are the kind of couple who demands a little more action and likes to travel a little deeper, you should consider another Indian Ocean destination: Mauritius.

The most obvious difference between Mauritius and the Maldives is the landscape. Landing in the Maldives is a bit like finding a sand dune in the middle of an ocean. But landing in Mauritius, you see a volcanic landscape of dramatic mountains and gently rolling hills covered with lush vegetation. Whereas the Maldives are a scattering of flat, desert islands, Mauritius is a complex, adventurous landscape. Every inch of available space on Mauritius is covered with rolling fields of sugarcane—the air is sweet with the smell of it, and as the wind moves through the sugarcane fields, they seem to almost wave to you in welcome. If ever there was a tropical island to be called “paradise,” this is it.

While there may not be the kitschy “overwater” bungalows you’ll find in the Maldives, don’t get it twisted—there is no shortage of posh beach resorts here. Most of them are along the eastern coast of the island which, thanks to a massive barrier reef, has gentle waves and shark-free waters. There are a number of fabulous places to stay, but none of them compare to the One & Only Le Saint Géran. This grande dame of a hotel has been a standard-bearer in tropical luxury since 1975 and just emerged from a multimillion-dollar renovation, asserting its place as one of the Indian Ocean’s leading resorts. Rooms, common areas, and beach loungers are spread out enough that you’ll feel like you have the whole place to yourself, and there are enough award-winning dining options to keep you on your toes for the duration of your honeymoon. Other honorable mentions on the island include offerings from The Oberoi and St. Regis, but it’s hard to compete with Le Saint Géran vis-à-vis its history and recent renovation.

There are more activities and things to see on this small island than anyone could hope to get through in a single honeymoon. You can spend a day spotting elusive pink pigeons and other rare birds at the nature sanctuary on Île aux Aigrettes, or go for a long hike in the Nicolière Reserve or Black River Peak Park. And whether you choose to go on a walking tour or simply perch at a café and linger over an espresso, it’s worth spending a day in Port Luis, the bustling capital filled with artisan workshops, expat bars, historic architecture, you name it. And while there is a lot of history to explore, it's important to know the island was successively colonized by the Dutch, the French, the British and served as a key Indian Ocean trading port for decades.

But beyond the obvious “what to see?” and “where to stay’?” it bears mentioning that the most special part of Mauritius—beyond the luxury resorts, beyond the exotic landscape—is its people. The island’s population is incredibly diverse, with thriving communities of Indian, Chinese, African, and European descent living in harmony. It is not uncommon in Port Luis to see an Indian woman and a Chinese woman carrying on a conversation in half-English and half-French. It’s a level of diversity and acceptance that's rare, and one that makes traveling Mauritius feel refreshing and exciting.

When it comes to honeymooning in the Maldives versus Mauritius, the truth is that there really is no right or wrong answer—just bear in mind that for the newlywed couple looking for a slightly deeper, more culturally immersive travel experience in the Indian Ocean, Mauritius is without a doubt worth checking out.