Take a look at you and your crush's synastry to see if you're a perfect match. 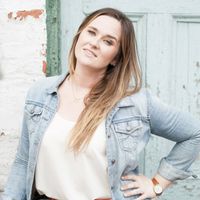 Erin Celletti
Erin is a writer and educator born and raised in New Jersey. She writes about lifestyle, travel, women's health, and wedding and event planning.
Brides's Editorial Guidelines

Ever consider that love may truly be written in the stars? It does make sense—some star signs have personality traits that mesh quite beautifully with others and, conversely, some do not. In fact, some people hold the belief so firmly that the dating app Bumble rolled out a feature that lets those looking for love filter by zodiac sign. Intrigued? So were we.

If you're wondering how your zodiac sign may impact romantic compatibility, we spoke with expert astrologer Suzie Kerr Wright to find out more.

First and foremost, Wright clarified that astrology is much more than just your sun sign. "We have all the planets, all the signs in our birth charts, and the way they are configured are what makes us uniquely us. Our sun sign is just the tip of the iceberg, we tend to gravitate to one sign or another, or avoid some because we just don't understand them. But does that mean we should avoid certain signs because a book told us to or because we had a bad experience with a specific zodiac sign? No."

This is where something called synastry—or relationship astrology—comes into play. And if it turns out that on paper (or in the stars) your partnership might not be the best, don't fret; often, love knows no bounds. In fact, Wright shares, "My husband and I are a perfect example of how a 'bad' combination can work. He's a Leo, I'm a Scorpio." Astrologically, the pair is an awful duo, but she reassures, "It's wonderful."

"Everything else in our charts, our Venus, Mars, Moon, Mercury are all in perfect harmony with each other," she adds. So, Wright suggests looking at this information as merely a guideline, but not to, under any circumstances, "miss your chance at a meaningful relationship simply based on someone's sun sign."

How to Plan Your Wedding Based on Your Moon Sign

Aries folks probably shouldn't get involved with a Pisces or a Cancer. Pisceans are highly sensitive, and the abrupt nature of an Aries could be a challenge for them. Cancers can also be highly offended by an Aries's straightforward manner. They may appreciate the honesty at first but later come to resent it. Cancers and Pisceans may also be attracted to the decisiveness of an Aries at first, but once they realize it's the Aries way or the highway, they will squirm out of the relationship quickly or get frustrated or bored and just move on to someone else. Aries wants to go, go, go while Cancer is content at home; they're tough matches.

Tauruses and Leos might have a hard time. Leos need a lot of attention, compliments, and ego bolstering. Tauruses will not give them the attention they seek, choosing to get attention in their own way. Leos also like to get their way, while Tauruses want to be the one in control of the relationship. This makes for similar energies, but they go about getting their way very differently. Also, Leos are far more sociable and outgoing, while Tauruses are more private—these two just won't get each other on any level. Though this could start with a whirlwind romance, as both know how to create super romantic dates, the earth can put out fire and that's what would happen here.

Scorpio is probably one of the worst matches for Gemini. Scorpios are demanding, intense, and have high expectations in relationships—Gemini may be fascinated by them at first, but they will soon feel smothered and overwhelmed by a Scorpio's depth of emotions and needs for a connection that goes beyond Gemini's capability; Scorpio “owns” and desires, while Gemini skims the surface. Geminis love people, but most Scorpios move stealthily through the world and avoid small talk and unnecessary chatter. In this relationship, what you see is what you get. Scorpios will soon tune out and pull back, leaving Geminis looking for another partner who “gets them.”

Aquarius is a super tough match for Cancers. They are both concerned about taking care of others and fairness, but when it comes to a relationship, Aquarians are just too flaky for Cancers, who need security and consistency in relationships. Aquarians need a lot of freedom, and it can cause suspicion in Cancers. Cancers would feel like they were always second in the relationship to anything—friends, work, the world—it doesn't matter. Cancer needs someone who will be there when they have a problem or need to talk, no matter how big or small. Aquarians have trouble understanding that even if a problem doesn't make sense or seem like a priority to them, it may be important to their partner. It's not the best gamble.

Leos would struggle in a relationship with Capricorns. Capricorns love tradition and routine. They work hard—many are workaholics—while Leos live on the edge. Leos are big-hearted but not much on planning. Capricorns would go crazy with all the strays (people and pets) Leos would bring into their home and feel as though they have no refuge, making them very unhappy. And an unhappy Cap is a wet blanket over Leo's fun. Even the energy of this sun-warmed fire sign, Leo, with the cooler, mellow earth sign Capricorn just doesn't feel right. The hot sun constantly beating down can scorch the earth quickly.

Do not pair a Virgo with a Sagittarius. Even the most flexible Virgo will become quickly frustrated with Sagittarius's lack of consciousness when it comes to tidiness, being on time, sticking to plans, and staying on task. These two are polar opposites. At first, Virgo may enjoy Sag's initial openness to their healthy lifestyle or artistic side (yes, many Virgos are super creative) but once the shiny newness has lost its luster, Sag takes off, leaving Virgo to clean up their mess. Literally and figuratively. Sex life? I don't know how they'd even get that far.

Libras can get along with most signs, but their worst match would probably be Virgo. Libras are flighty and fickle, and that's one thing Virgos can't tolerate. It may look fun at first, but Libras waste a lot of time, and Virgo is about efficiency. Libras are constantly being pulled in different directions by others. And Virgo is way too critical for Libra. Their sex life could be lovely at first, very romantic and traditional, but even that will get boring for both after a while.

Many think that Scorpio's opposite, Taurus, would be a bad match, but it's Libras that drive Scorpios crazy for being noncommittal, indecisive, and flirtatious. Scorpios can flirt (in a mysterious kind of way) but can't tolerate their partners doing the same. Libra will at first be excited with Scorpio's willingness to do everything together, but after a short time, Scorpios will dig in and want more time alone and less time at social events. Romantically, Libra's airy lovemaking is not up to Scorpio's passionate, wreck-the-room sex. This is a match destined to end as quickly as it starts.

Capricorns would be difficult to deal with for the outgoing, adventurous Sagittarius. Sags love spontaneity and intellectual stimulation, debate, and leaving things unfinished, while Capricorns are more about the bottom line, keeping things orderly and calm. Sagittarius will feel like Saturn-ruled Capricorn isn't a good partner on their quest for fun and enlightenment. Sag will spend more time trying to change a serious Capricorn, but a Capricorn will just as soon cut their losses and find someone more compatible. If they do connect and try a relationship, it'll be Sag who is in charge of planning dates and initiating sex.

Social butterfly Gemini is a nightmare for rock-steady Capricorn. Gemini needs a lot of chatter and flits from one project to the next. This confounds Capricorns, who always finish what they start. There's too much chatter, too much shifting and changing which creates a lack of trust for Caps. Capricorns like to know what their next move is and definitely do not thrive on change like Geminis do. If a Cap is in the mood for a fling with no strings attached, this could work for a short period.

Aquarians are baffled by Scorpios and can't begin to understand how they cannot see things their way. If these two can even spark a conversation that leads to any sort of relationship, it'll go down in flames. Aquarians demand their freedom and can become passive-aggressive when Scorpio tries to get them to settle down—staying out later, finding new friends, and not inviting their partner. Scorpio will settle into their sulky mood and get quiet. Aquarians won't bother to try to get them to open up, they'll just be off doing their own thing, which will anger Scorpio—this, obviously, isn't good.

Geminis or Libras would be a tough combination for a Pisces. Water sign Pisces can go with the flow, so it seems as if either one of these sociable, happy signs would be a nice fit, but Pisces actually prefers peace and quiet and more privacy than a Gemini or Libra. There's also the problem of infidelity, which is common for Geminis and Libras, and unbearable to a watery Pisces. Neither one of these signs would know how to deal with the flood of emotions that can pour from a wounded, or even a happy, Pisces. In these pairings, Pisceans would feel terribly unsupported emotionally.

The Best Wedding Hairstyles Based on Your Zodiac Sign