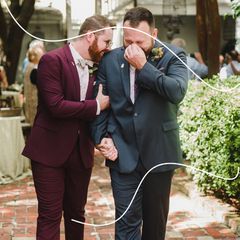 When it comes to wedding ceremonies, there's a general outline that's usually followed: Processional, welcome, readings, vows, kiss, pronouncement, recessional—you're married! But there's no reason you have to adhere to the traditional order. If you're wondering how to plan a wedding ceremony that's entirely unique, feel free to throw out the script and start from scratch. Or, you can take a ceremony format you like, and then customize it to reflect your relationship.

We turned to JP Reynolds, M.Div., a celebrity officiant who has officiated more than 1,000 weddings and the author of How to Officiate a Non-Denominational Wedding Ceremony, to find out where to start. "The first thing to do is figure out what you do (and don't) want in your ceremony," says Reynolds. "Is there a tradition you love, or something you saw at a wedding that made you think, 'never at mine.'"

The traditions you love should become key elements as you put the ceremony together. You'll also want to talk to your future spouse about what the ceremony means to the both of you. "Is the ceremony the heart of your celebration, or is it something you have to do so you can get to the party?" Reynolds asks.

JP Reynolds, M.Div., is a celebrity officiant who has officiated more than 1,000 non-denominational, interfaith, cross-cultural, and same-sex wedding ceremonies. He is the author of "How to Officiate a Non-Denominational Wedding Ceremony."

"A personalized ceremony allows people to feel rooted and renewed, and provides people with the opportunity to give you that big, tight hug and bless and confirm your union," says Reynolds. Here, he shares his expert tips on how to create a wedding ceremony that will do just that.

Find an Officiant You Connect To

The officiant plays a huge role in your ceremony. Try to find someone with whom you connect. If you don't already have a relationship with a pastor or officiant, don't feel pressured to choose someone just because of their title. It's fairly simple for anyone to become an officiant. Think of a friend or family member who would be honored to take on this special role and see if they would become an officiant for your wedding.

Acknowledge the Past, Present, and Future

No matter where you're getting married, whether it's at a five-star resort or in your backyard, in front of 10 guests or 200, every wedding does three things. "All weddings give thanks for the past, celebrate the present, and honor the future," says Reynolds. "It's an affirmation of who the couple is at this moment in time, as well as who they want to become individually and as a couple. It's both that simple and that profound."

A Definition of Marriage Isn't Necessary

A wedding is not the time and place for the officiant to lecture on the definition of marriage. "No one attends a wedding hoping for insight into the existential meaning of marriage," says Reynolds. "They won't remember what was said five years from now, but they'll remember the tone and how the ceremony made them feel. When done well, guests should leave your ceremony feeling refreshed and ready to celebrate your love."

Centralize the Exchange of Rings

The highlight of the ceremony is the exchange of rings, says Reynolds. "Everything before and after that is the icing on the cake—rituals that add texture," says Reynolds. If you don't have bridesmaids or groomsmen, ask someone who has a meaningful connection to the two of you, such as your parents or your children, to present the rings as a sign of their love and blessing.

Choose Music That Means Something to You

In the same way that you don't want to disrupt the ceremony with excessive or lengthy readings, Reynolds also advises choosing music carefully. "You don't want to turn it into a concert by having someone sing while everyone stares at the couple while listening," he says. Instead of pausing the ceremony for a song, Reynolds suggests using music in the body of the ceremony to accompany some other action, such as a unity ritual or a moment honoring your families.

Don't feel pressured to use traditional music. Brides can walk down the aisle to anything, from Beyoncé to The Beatles. Some couples even use scores from their favorite films. We know one bride whose DJ launched into Katy Perry's "Unconditionally" as soon as the bride and groom were pronounced man and wife—get creative with your ceremony.

Think about the tone you want to set for the ceremony and then choose music that amplifies that tone, whether it be sweet, nostalgic, traditional, or alternative.

Don't Include Things Just to Fill Up Time

Avoid cluttering up your ceremony with "stuff" just for the sake of filling time and space. "Everything you include in your ceremony should be in service of highlighting the two of you and your relationship," says Reynolds.

Consider Including Your Guests in the Ceremony

Instead of a single reader, ask multiple guests to participate by dividing the reading into shorter segments. You could also keep them seated, scattered throughout the rows of guests, to surround your guests with the feeling of community.

There are many unity ceremony ideas that you can include. It can be as simple as lighting a candle together or binding your hands together with rope. You can also plant a tree together to symbolize the roots you'll grow or pour sand into a vase to represent the blending of your lives. You can incorporate a religious ritual like circling one other, seven times each in accordance with Judaism, to represent the newfound family, protection, and love; or the braiding of the cross, to show that your new lives are intertwined with God and that the new union cannot be broken.

There's one unity ritual, in particular, that Reynolds likes to see included, and that's the wine box ritual. During a wine box ritual, a wine of the couple's choosing is sealed in a commemorative box, along with letters from the bride and groom to each other. Down the road, they'll open the box together and drink the wine, read the letters and remember the special day.

Reynolds suggests taking it one step further: Amplify the emotion of a wine box ritual by asking your parents, your wedding party, or all of your guests to write letters to the two of you to include in the box along with your letters to one another. "I always put this in the context of family, and urge the couple to take the best of the people who love them and use that to create a home that is a safe haven," Reynolds explains. "I remind the couple that when they reopen the box, the love and support of the people they care about will come tumbling out."