A Guide to LGBTQIA+ Weddings in 2022
Explore
CLOSE 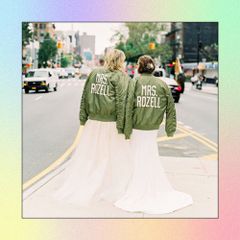 How to Choose a Last Name as a Couple

Liz Susong
Liz Susong is the editor of Catalyst Wedding Co., a feminist wedding company that publishes a magazine and website on love, sex, weddings, and marriage.
Brides's Editorial Guidelines

LGBTQIA+ couples have the same options as opposite-sex couples when it comes to choosing a last name upon marriage: Keep original last names, have one partner take the other’s name, hyphenate, or mutually choose a new name. However, unlike heterosexual couples, the reasons behind same-sex couples’ last name choices may be specific to the experience of living in a country that has only recently begun legally recognizing their marriages.

In countries like the U.S., it's traditional for a woman to take her husband's last name in a heterosexual marriage. But, if both members of a couple are the same sex and they want to share a last name, it's not so clear whose they should keep, if either. Because there is no precedent, same-sex couples are forced to have intentional conversations around values, identity, and family before choosing how to approach the last name issue. These conversations may go unspoken for opposite-sex couples, but many opposite-sex couples are having those difficult conversations these days, too.

Below, we heard from real queer and same-sex couples about their experiences deciding on a surname to help solve the mystery of how to choose a last name once you're married.

Because of newly acquired rights and complicated legalities, some same-sex couples have viewed sharing a last name as extra insurance in case of an emergency, like a hospital trip. Others feel that sharing a last name gives their marriage more credibility in the eyes of a culture that understands marriage to be between a man and a woman.

But this is not the case for everyone. Some same-sex couples understand the tradition of one person taking the other’s last name to be rooted in a patriarchal, property-based history of marriage in which a woman is subservient to her husband, and they, therefore, want zero part of that. Cindy of Missouri says this was definitely the case for her: “We both loved our names and adamantly did not want to change them.”

Others see the opportunity to share a last name as a challenge to the institution of marriage itself. It's a way of taking a longstanding tradition and adapting to it in a progressive way.

Sharing a last name may feel like the simplest route if you're planning to have kids. But if you both want to keep your own names, consider giving your kids a hyphenated surname.

“People often comment that gay people were trying to ‘change the institution of marriage,’ and some would deny that, but I think we have changed it, but for the better," says Melinda of Ohio. Besides, she adds, marriage is always evolving: “People aren't going around trading their daughters for goats anymore or figuring out how to create political alliances.”

So, when it came to choosing a last name, “We didn't want to just recycle the tradition of the woman taking the man's name since there is no man here, no one is anyone's property, and sadly, no goats were exchanged during this process,” she said. Instead, Melinda and her wife, Patti, elected to combine their names to create a new last name. Patti summarizes, “Marriage is the intertwining of two lives, and we even wanted to intertwine our names.”

People often comment that gay people were trying to ‘change the institution of marriage,’ and some would deny that, but I think we have changed it, but for the better.

Tony and his husband also chose to combine their last names after their wedding. The name they chose “was our hashtag for our wedding guests. A friend always said it was our ‘Brangelina’ name, and we never even considered it until we got such a positive response from our guests.”

Tracy and her wife did the same: “My name was Schakett and her name was Williams. It was either Schwilliams or Willhakett (which is mass murderer-sounding). As we have been together for 11 years, many of our friends had already called us the Schwilliams for a long time.” These affectionately bestowed couples’ nicknames signify their community’s role in recognizing the legitimacy of their partnership despite the larger culture’s reluctance.

For same-sex couples in which one partner chooses to take the other’s last name, there are a variety of factors to consider before choosing—and the choice is not based on gender alone. For instance, maybe one person just has a nicer-sounding name. Or there may be a variety of sentiments attached to one name that the couple prefers.

Brandon, a hair and makeup professional in Virginia, elected to take his husband’s name. In a personal essay, he wrote: “My former name was just fine. But then I got married and suddenly cared about my name. I don’t consider myself a traditional person; however, changing my last name to my husband’s excited me.”

He talks about what this new name symbolized for him: “A ‘Kirk’ is a caring and compassionate person. A ‘Kirk’ is someone who holds family and loved ones close to their heart and is affectionate and nurturing. These are values I’ve learned to adore in my new family. So, it seemed fitting that I would choose this name after getting married in hopes that I might embody everything this name means.”