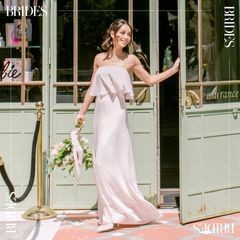 What Is a Bridal Shower: Planning & Etiquette Advice

Throw the perfect bridal shower with this planning guidance!

Bridal showers are a time-honored wedding tradition with origin stories dating back to 16th-century Holland when a young girl's father refused to provide a dowry to a marriage he disapproved of. The town got together and offered small gifts to help her start her home without the dowry money. The core of the tradition has somewhat held up over the years, and today, we typically shower couples with gifts for the home.

What Is a Bridal Shower?

A bridal shower is a daytime event in celebration of an upcoming marriage. Traditionally, it's an opportunity for guests to give the couple gifts for the home.

The etiquette for these affairs has certainly morphed and changed over time, and it can be a bit confusing—from who throws a bridal shower to what to write on a shower invite. So we talked to etiquette expert Diane Gottsman to get all the answers on what happens at a bridal shower and how to plan one.

While it can get a little overwhelming, especially if you're tasked with planning the event, remember it's only meant to be a fun way for the bride to celebrate with close friends and family. "A bridal shower is designed to shower the bride with good wishes, congratulations, and some gifts," Gottsman says.

Diane Gottsman is a national etiquette expert, author of Modern Etiquette for a Better Life, and founder of The Protocol School of Texas.

As a longtime favorite pre-wedding event, bridal showers can be both exciting and daunting to plan for. From finding a location and choosing the shower decorations to picking a gift the couple will love, this guide has got you covered. Here’s everything you need to know to plan the perfect bridal shower.

Technically, there's no right or wrong way to throw a bridal shower. But this doesn't mean there aren't generally established etiquette guidelines. We've answered the biggest etiquette questions so you can avoid making a bridal shower faux pas.

What Happens at a Bridal Shower?

"Depending on the taste of the bride, the host can have some entertaining games for the guests to play or skip the games altogether," says Gottsman. The general outline is usually the same: food, drinks, and an opportunity for the bride to open gifts surrounded by guests. You can stick to bridal shower traditions like gift bingo or designing wedding dresses using rolls of toilet paper, or you could plan an activity-oriented shower like a spa day or a calligraphy lesson. Don't love the idea of opening gifts in front of everyone? Speak up! Those gifts could be set aside so you can open them at home along with your future spouse.

What Does the Groom Do?

Speaking of your partner, they often arrive toward the end of the shower (with flowers in tow) to quickly greet the guests before they depart. It's a sweet way to include them in your celebration as well as guarantee help getting those gifts home.

What's the Difference Between a Bridal Shower vs. a Wedding Shower?

Wedding showers have gained popularity as a more inclusive iteration of the bridal shower. Where a bridal shower is traditionally a pre-wedding event saved for the bride and her crew of female friends and family, a wedding shower is a co-ed festivity.

When Should You Throw a Bridal Shower?

Usually, the bridal shower is held two to six months before the wedding. Choose a date that is convenient for both the bride and the guests of choice, whether that means hosting something a little further in advance or planning it to coincide with a trip home or another get-together, such as a bachelorette party in the evening following an afternoon shower.

Who Throws a Bridal Shower?

The bridal shower is usually hosted by the maid of honor, close friends, bridal attendants, or bridesmaids. No matter who is hosting, be sure to communicate clearly to make sure you aren't planning two separate showers. Traditional etiquette says the mother or mother-in-law (or any relatives, for that matter) should steer clear from hosting as it can appear that they are directly asking for gifts. However, today it's become much more common and perfectly acceptable for anyone up to the task to host.

If family members aren't available to help plan, the bridesmaids should step in to help take care of some of the arrangements.

Should the Bride Be Involved in the Planning Process?

Unless it's a total surprise, the person being showered will generally provide some basics that they'd like at their event. The host will ask about preferred themes, guest list details, date, time, location, activities, and other ideas to get a sense of where to start. It's up to the host or hosts to use that input to bring the shower to life.

Who Gets Invited to a Bridal Shower?

For the bridal shower, this usually includes the bridal party and the couple's family and close friends. The number invited depends on how large the event is intended to be. If the shower is going to be a surprise, the maid of honor and the bride's mother should work together to come up with a guest list they think the bride will be happy with. Otherwise, they can have the bride assist them with the guest list and then keep the rest of the planning a secret.

When Should Bridal Shower Invitations Be Mailed Out?

Ideally, the invitations should be mailed out four to six weeks before the bridal shower, either by post or email. Make sure to include the bride's name, the date, the time, the location, registry information, a way to RSVP, and the names of whoever is hosting.

What's the Dress Code at a Bridal Shower?

A bridal shower can be as formal or casual as you want it to be, but it's best to at least include some sort of guide in the invitation. "There's not one particular dress code," says Gottsman. "But it's always better to dress up than down." If there's no indication of the event's formality, it may be more comfortable to show up overdressed than underdressed. If cohesion in your shower photos is important to you, it's a good idea to think about what the guests will be wearing and make a note somewhere within the invitation.

Where Should You Throw a Bridal Shower?

If the bride still lives relatively close to home, the shower can be held in their hometown. Does the bride live in another state? It may still be more convenient for them to travel to the shower if most of the guests live locally, instead of asking the entire guest list to hop on an airplane. The specific location depends on the type of shower and the host's budget. It could be in a friend or family member's home or backyard, at a local restaurant, or somewhere more specific if the shower has a theme (such as a cooking school or a wine-tasting room).

No matter the selected date, make sure the bride has put together a wedding registry before the invitations are sent out so guests can purchase gifts.

Should a Bridal Shower Have a Theme?

It doesn't have to, but it's a fun way to add some personality to the party. A theme could be as simple as cohesive, rustic decor, or you could go all out with a spa day. Some of our favorite themes include a bridal tea party, a Disney-themed shower, or a Parisian-influenced affair.

Does the Bride Need a Registry for a Bridal Shower?

Not necessarily. The actual wedding registry can also function for the bridal shower. If, however, it's a lingerie shower, that would require a separate registry should the bride want to register for specific lingerie. As a bridal shower guest, it is in good etiquette to purchase a shower gift from the registry.

Steps to Planning a Bridal Shower

Plan an unforgettable bridal shower by checking off each of the following steps.

The very first step to plan a bridal shower is to create a budget for the entire process. This includes food, drinks, decor, venue, rentals, event design, photography, videography, and any other vendors or expenses incurred while planning. Depending on the type of shower and what the bride wants, a typical bridal shower can cost anywhere from $10 to over $100 per person. These costs are covered by whoever is hosting the bridal shower, though sometimes bridesmaids or family members may offer to chip in.

Consult with the bride to choose a date that works for them and fits the wedding timeline. Aim for a minimum of a couple of months before the wedding. Keep in mind other events of the wedding like the bachelor/bachelorette party, which some couples plan for the evening of the shower day.

Get a must-invite list from the bride and work with that as you create the full party guest list. Have the bride double-check and approve the list before you send out invites.

You may decide to opt-out of a bridal shower theme, but if the bride is a wine-lover or cooking connoisseur, you might consider choosing a theme that follows suit. This will guide your planning decisions for the rest of the process.

Often the host will offer their home to hold the bridal shower. If this isn't an option, see if another guest or co-planner has an available space. You can also choose a venue that correlates to the theme, like a spa or a winery, or you can host at a restaurant or hotel, or rent an Airbnb.

Give guests as much notice as possible so they'll be able to attend the shower and purchase gifts. This should be done about four to six weeks before the shower date, which means you should start looking for and purchasing invitations at least a few weeks prior to then. It's also a good idea to include a line on the RSVPs for guests to note any dietary restrictions.

The food will depend on the shower's theme and time of day. Hosting a brunch affair? Stock up on mimosas and breakfast foods. Whatever the menu, make sure it's something you know the bride will like and includes options for any food restrictions the guests note on their RSVPs.

If you've hired a professional event designer, this part will be pretty breezy for you. If you're decorating yourself, this is arguably one of the most fun steps in planning a bridal shower. Whether you're following a theme or not, think about what kinds of personal touches you can include for the bride. We love pretty floral and balloon installations—and don't forget a picture-perfect photo backdrop.

Games are a great way to break the ice when guests first arrive, especially if they are not already acquainted with one another. With a lot of traditional shower games, there is no purchase necessary—just a bit of creativity! If your budget allows, there are also tons of super fun shower games we love that are available on sites like Etsy.

Get everyone in the party mood with a fun selection of music. Ask the bride to send some must-have favorites to be included and mix in a few love songs and upbeat tunes for background music.