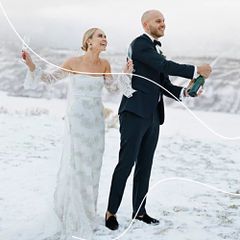 The star and her beau got hitched in the mountains—complete with a totally personal ceremony officiated by Jane Lynch!

As soon as Glee star and LadyGang podcast host Becca Tobin said "yes" to Zach Martin's proposal, the two hopped on a plane for a weekend getaway to Jackson Hole, Wyoming. "It was a bucket-list trip. Zach loves it there, and we'd always wanted to go together," says Becca of the unpretentious ski town. "And as soon as we got to Amangani, we knew it was where we wanted to get married." They didn't waste any time, and decided to get married at the property on December 3rd, 2016—just two months away. While most brides would shy away from such a short time to plan, Becca and Zach embraced it. "Zach plans events for a living. He's so organized and has great taste, so it was great to pass the baton to him!" the bride reveals. "And a short timeframe meant we made decisions quickly."

Amangani's size meant limiting the guest list, but the timing didn't: "We were worried people wouldn't be able to make it on such short notice, but nearly everyone we wanted to have there was able to come, which was really amazing," says Becca. 80 guests joined the couple in the mountains of Jackson Hole for a cozy and intimate snow-covered celebration. The party was simple and fuss-free, but a hotel buy-out meant it also lasted all night. And with Jane Lynch officiating, Becca's Glee cast-mates in tow, and the LadyGang co-hosts on the dance floor, it was a party you'll wish you'd been invited to! Carrie Patterson's stunning photos give us a peek into Zach and Becca's romantic mountaintop celebration.

Seeing the ideas come off the paper and come to life was crazy. It was the most beautiful dress I'd ever seen!

Becca almost wore her mother's wedding dress, but the garden-casual style wasn't quite right for the bride's wintery plans. "I visited a few boutiques, but everything I tried felt like 'insert bride here'—until I went to LOHO," she says. Becca fell in love with designs by Odylyne: The Ceremony, but still couldn't quite find The One. "Christy, the owner of LOHO, asked if I'd considered a custom gown. I worked with her and Stephanie, the designer, to pick what I liked from each dress and put together something one-of-a-kind." The finished result was an off-the-shoulder gown with floral beading, lace, and sheer bell sleeves. "Seeing the ideas come off the paper and come to life was crazy. It was the most beautiful dress I'd ever seen!" says the happy bride, who paired her gown with a sleek chignon, dramatic emerald earrings, and a custom veil by Daphne Newman Design.

Blush velvet Aquazzura sandals were the perfect mix of fashion-forward and seasonally appropriate. Becca's bouquet was a soft white-and-cream combination of roses, peonies, and scabiosa flowers.

The ceremony took place looking out of the hotel's floor-to-ceiling windows. Guests sat on wooden benches topped with white sheepskin rugs, and fresh blooms served as a makeshift altar. "I loved the way the greenery crept up the stone column," says Becca.

Pals like Lea Michele, Keltie Knight, and Jenna Ushkowitz were among the guests. Says Becca, "It was actually Lea's idea to ask Jane Lynch to officiate. I've always really looked up to her, and we have gotten so close over the years. When I texted her to ask if she would do it, she immediately sent back a screenshot of her being ordained online!"

Zach was the next one down the aisle, and the guests erupted in cheers. "I've never seen anything like it, but everyone stood up and cheered, laughed, and screamed for the groom!" says Becca.

Though the couple bucked many traditions, there was one Becca knew she wanted to keep: Having her dad walk her down the aisle. Two of the couple's nieces helped the bride with her train and veil as she made her way down the stairs.

"Jane put so much work into our ceremony," says Becca. "She researched poems and writings, pulled pieces that she loved, and emailed us both questions about one another to incorporate."

Becca and Zach also wrote their own vows, a mix of funny and heartfelt lines. "We ended up not having someone read them to make sure they were similar, but they were very balanced and similar in tone, as well as totally unique to us," the bride explains.

Zach and Becca wanted a snowy winter wedding, and that's exactly what they got—so much so that some of the guests were snowed in the next day! "We ordered pizza, played board games, and went in the hot tub while the snow came down," says Becca. "I'm so glad we got a little extra time with the people we hadn't spoken to as much the night before."

The couple toasted with champagne in the snow, then headed inside for portraits before the reception. "Zach and I are both the babies in our families, so we have a lot of nieces and nephews," says Becca. "Our siblings' kids are such a big part of our lives and they were so excited about our wedding, so it was really important for us to include them." Zach and Becca kept their wedding party small, opting to have just a maid of honor (her sister) and a best man (his father). "We decided just a few days before the wedding to have a wedding party," says Becca. "Zach really wanted his dad to stand up there with him. It was so special, and I'm glad it was just the two of them."

A short timeline didn't mean skipping the gorgeous paper! Swell Press Paper created white and gray invitations that were elegant and modern, with kraft paper envelopes (and a map of the area!) for a rustic touch. When the original plan for an escort chalkboard fell through, Becca and Zach's florist, Lindsay Rae Designs, and calligrapher created escort cards that were hung from vines along one of the hotel's stone walls.

Amangani's restaurant was the perfect modern-meets-mountain setting for Becca and Zach's reception, where long tables were simply topped with white linens and strands of greenery.

The simple green-and-white décor was fresh and airy, leaving the focus on the stunning setting.

Guests sipped grapefruit shandies and Moscow mules before dining on a family-style meal of Italian favorites.

"Zach and I are both doughnut fiends," says Becca. "I've always cringed at the thought of cutting the cake and feeding one another, so instead we served something guests could pick up and snack on." Jackson Hole's Nom Nom Doughnuts made a sprinkled, frosted, and fruity assortment.

Guests danced all night, with Becca joining her Glee costars and LadyGang pals. Late in the evening, guests snacked on chicken fingers and truffle fries. "When the party was over, Zach and I went back to our hotel room and there was a knock on the door. It was our sisters, brothers-in-law, and friends from L.A.—and they brought pizza and champagne! It was the perfect way to wind down, and I was ready to eat my weight in pizza," says Becca.

Planning a wedding so quickly took a lot of quick and selective decision-making. "Don't do things just because everyone else does," says Becca. "We left out traditions that didn't resonate with us, and we felt great about it!" She also hopes couple's won't feel too much pressure to talk to every single guest. "We tried to talk to as many people as we could, but you can't feel guilty for getting back on the dance floor!"