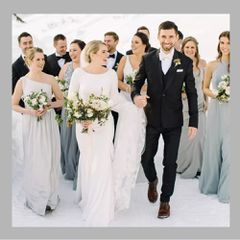 Julianne Young and her A-team nailed every detail

Canadian wedding planner Julianne Young is no stranger to crazy summers, and 2016 was no exception. So in October, when her boyfriend Kristian Wieclawek suggested they spend a relaxing weekend in Banff, she was just ready for some R&R. “We love going for trail runs, so after breakfast we geared up for a few hours outside and headed to the trailhead,” she recalls. Kristian took the lead (in case of bears, of course!), and after just a few minutes, Julianne spotted a bouquet of flowers on the ground and a photographer up ahead. “There are so many tourists in the area so I didn’t think much of it. In fact, for a split second, I was worried we were running into someone else’s proposal!” she says with a laugh. But Kristian stopped, picked up the bouquet, handed Julianne the flowers—and that’s when she realized she’d run into her own proposal! “Kristian led me down a path filled with framed photos of our relationship, from our friendship in high school through vacations, dates, and other adventures. As we came around a huge rock, I saw an antique table topped with flowers, candles, macarons, and champagne nestled among floral ice cubes,” Julianne recalls, and that is where Kristian got down on one knee. (Photographer Corrina Walker was also on-hand to capture the sweet moment.)

Of course, Julianne knew he couldn’t have pulled this off alone, and immediately asked who had helped make it all possible. Suddenly, her entire planning team emerged from behind the rock to surprise her! “We had recently launched a new program to plan proposals in addition to weddings, and I had been our first client!” Julianne exclaims. “They’d planned the whole thing without me knowing, and had brought a change of clothes and makeup for an engagement session. They’d taken care of everything.”

For their February 10, 2018 wedding, Julianne’s team stepped in again, this time with the bride as the lead designer to execute her vision. “It was incredible to experience wedding planning on a personal level," she says. "I really appreciated being on the other side. It was so much fun, but now I can relate to any of our stressed-out brides!” The couple selected the Fairmont Chateau Lake Louise in Alberta, and invited 145 guests to join them in the heart of the Canadian Rockies. For the winter wedding, the bride chose a clean palette of white and dove grey, creating a modern secret garden in the snow. And after capturing the couple’s engagement, Corrina Walker was an easy choice as their photographer.

"Dress shopping was so much fun,” says Julianne. “I knew I wanted long sleeves for our chilly winter evening, and I found my Pronovias gown at my very first appointment!” The crepe style had a fitted silhouette and lace overlays along the bodice and sleeves.

“My veil was incredibly important to me,” says the bride. “I wanted it to be an heirloom I could hand down to my kids, so I had it custom-made by Daphne Newman Design.” She donned the cathedral-length style for the first look, which took place in front of the altar. “My dad walked me to the ceremony site, and Kristian was there waiting for me. I’d literally dreamed about it a few months earlier, and it was so special to have this moment for just the two of us where we were about to exchange vows.” The groom’s sleek tuxedo was custom-made by en-ti-tled.

The bridesmaids were invited to choose floor-length gowns in shades of grey, each selecting a color and style she loved.

After a record snowfall, Lake Louise was shimmering and pristine on Julianne and Kristian’s wedding day. “It felt like we were walking on sparkling clouds,” says the bride.

"We draped the mantle in greenery and accented it with fresh flowers, then filled the fireplace itself with pillar candles for a cozy glow,” Julianne describes. The couple wrote their own vows, speaking from the heart about their early friendship, their relationship, and what they were most looking forward to as they began their marriage.

Though she’d designed countless receptions before, Julianne was still speechless when she walked into the ballroom.

A mix of round and long banquet tables were draped in matte ivory satin, mimicking the snow outside the windows. Grey chargers were paired with white hemstitch napkins and golden cutlery, while centerpieces in weathered vessels paired clematis and roses with sprawling greenery. Sandstone-colored pillar candles completed the look.

The indulgent dinner menu featured creamy mushroom soup en croute, an elegant salad presented as a bouquet of greens, and a choice of locally sourced bison, sablefish, or roasted chicken.

The simple four-tiered wedding cake was draped with creeping clematis and jasmine vine. Inside, the chocolate cake was layered with salted caramel filling and vanilla buttercream.

“Even as a professional event planner, I couldn’t have done it without my amazing team,” says Julianne. “Having someone take care of us on our wedding day was invaluable and essential to us enjoying every moment and really being present.”