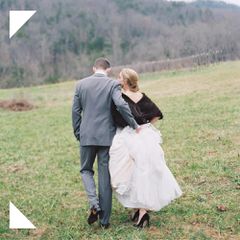 A Rustic-Chic Wedding at Blackberry Farm in Tennessee

Planned by Jessica Sloane, with florals by Amy Osaba Design

When Miller Morris and Jesse “Patton” Robinette were undergrads at Vanderbilt University they were both heading toward careers in medicine, but found themselves in an "Introduction to Theatre" class in January of 2015. “Neither of us was even interested in acting,” says Miller. They became friends, then Miller headed off for a semester abroad while Patton went from being Vanderbilt’s starting quarterback to being a medical student. “We reconnected, and fell in love quickly,” Miller recalls. On Christmas Eve in 2016, Patton invited Miller on a rainy walk around campus, and the pair reflected on how they’d wound up there together. “Suddenly, on the front steps of the building where we’d first met, he got on one knee and asked me to be his wife,” she says. The couple spent the night celebrating with Miller’s family, then headed to East Tennessee on Christmas morning to celebrate with Patton’s as well.

Patton and Miller both love family traditions, and realized that Christmas of 2017 would really be the only time they’d have away from medical school to say “I do"—so they got to work planning a December 23, 2017 wedding in Tennessee. “The 23rd of December is also Patton’s grandparents’ and aunt and uncle’s anniversaries, and we love getting to share it with them,” says Miller. They exchanged vows in a super-private ceremony at Patton’s childhood church (only their parents, the minister, and a single witness were in attendance!), then celebrated with 50 guests at Blackberry Farm. The evening was cozy and warm, filled with deep tones of black-green and berry as a modern twist on a Christmas palette. “We combined my contemporary taste with Patton’s love for all things rustic, which helped our wedding feel really homey,” says Miller.

With help from planner Jessica Sloane on the design and Tec Petaja behind the camera, this holiday wedding was warm, inviting, and totally chic. Keep reading for more!

As an added bonus on their December 23rd date, the grounds at Blackberry Farm were already dressed for the Christmas season.

The couple’s invitation suite was full of intricate details, from the watercolor liner and velvet ribbon wraps to the shimmering copper accents. It was all designed to match Miller’s engagement ring, a pear-shaped black diamond set in warm rose gold.

“I have a less traditional style than my sisters, and was hesitant to go to the same salon where they’d found their wedding dresses,” says Miller. “We didn’t have much luck, until my mom spotted a dress as we were on our way out of the store.” The hidden gem? A Reem Acra gown featuring intricate embroidery on the bodice and a soft, flowing skirt.

Miller paired her dress with the Vera Wang veil that both of her sisters had worn on their wedding days. She also added a pair of black-green velvet Jimmy Choo pumps. “That was the accessory that made me feel like myself,” says Miller. “And I love that I’ve been able to wear them again since!” Patton wore a custom gray suit by Loring and Co., with their wedding date embroidered under the collar. “He is going to wear it for his physician residency interviews for good luck,” says the bride.

Florist Amy Osaba created lush and wild flowers that paired berry tones with touches of mauve and ivory, all surrounded by deep greenery. Peonies, cappuccino roses, ranunculus, orchids, and sweet pea were arranged to match Miller’s “curated yet unkempt” vision. Miller’s sisters both have small children, so they carried floral wreaths instead of bouquets to make it easier to hold their babies throughout the day.

Though the couple’s religious ceremony was incredibly private, they wanted their guests to be able to participate, so they had a second "blessing of marriage." This took place at the Yallarhammer Pavilion, which they dressed up with lanterns and neutral blankets in case guests got cold.

Guests sipped hot toddies as the couple exchanged personalized vows before moving straight into their first dance. A string quartet played “To Make You Feel My Love” by Bob Dylan.

An indulgent and warming dinner awaited guests inside, where a long table was set beneath an overhead arrangement of organic greenery. A forest-green velvet runner served as a focal point down the middle of the table, which was lit by taper candles and topped with dark dishes and copper flatware on either side.

“Our florist used locally foraged greenery and combinations of ranunculus, peonies, and roses in my grandmother’s antique copper cookware to top the tables,” says Miller.

The four-course meal began with French onion soup (Patton’s favorite!), followed by beef filet with buttermilk potatoes, a cheese course, and wedding cake. “I have celiac disease, so as the cake was served, a flourless chocolate tart appeared at my place,” says the bride.

For those who were indulging, the ecru wedding cake featured layers of Guinness dark chocolate stout cake and traditional almond cake. “We also had red velvet cupcakes as favors, as an homage to Patton’s grandparents’ and aunt and uncle’s weddings,” Miller recalls.

Inclement weather in the forecast meant Miller and Patton had taken their portraits the day before the wedding, leaving them plenty of time between their religious ceremony and the reception to actually see their guests. “Patton had a beer with his college buddies, while I was on the ground in my wedding dress playing with my nephew as my sister got ready,” says Miller. “It was so lovely to spend some ‘regular’ time with the people we care about so deeply.”