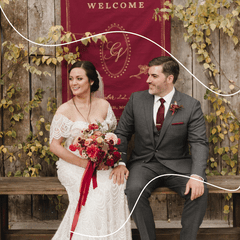 Vanessa Olsson, a Seattle native, is thankful that Christopher Bartlett moved west from Montana. The two first met in May 2013—at a bar! "Chris was taking out clients for an authentic 'Seattle night on the town,'" Vanessa recalls. "I was doing the same thing with my group of girlfriends. The sparks were there!" She even jokes: "Now a lot of my friends are better friends with Chris than they’ve ever been with me!" But Vanessa has more to be thankful for than a great friendship. Two years into their relationship, Vanessa was in an accident that resulted in her being paralyzed (for the foreseeable future) and in a wheelchair. Christopher was right by her side. "Chris never ever wavered in his support for me," she says. "When I woke up out of my coma, he was on the phone with a real estate agent trying to find a handicap accessible house to buy. His love and encouragement are a big part of the reason I went back to work again and have a rich, full life."

And a rich, full life they have: Vanessa and Chris have a made a "hobby" of traveling the world by planning trips to world-famous restaurants. In November 2017, they got a reservation at Alain Ducassee in London, where Vanessa says the service was like "watching a ballet." The most notable moment came when the waiters brought out a caviar dish in an antique server—because when Vanessa opened the lid, she found a diamond inside. "The whole meal was so impressive," she says."Even without the engagement, that would have still been the best meal of my entire life. But the proposal didn’t hurt!"

Even though Vanessa and Chris found love in Seattle, they looked to Montana, where Chris grew up, to say "I do." "Flathead Valley is truly God’s country, one of the most incredible and beautiful places on Earth," explains the bride. "There’s nothing quite like it, and we love coming back as much as we can. Hopefully one day for good. Planning the wedding just gave us even more excuses to visit!" With the location set at The Barns at Big Mountain Ranch in Whitefish, Montana, the couple turned to Greenwood Events to bring their vision to life. They started with the bride's favorite childhood book, The Twelve Dancing Princesses, as inspiration—Vanessa admits that Chris mocked her a bit of this—but the tale translated to a rustic-meets-elegant fall wedding in the great outdoors. "There was really magic in the air! So many people have told us it was the best night of their life," Vanessa says.

Keep reading to see what magic the couple created for their big day, as captured by Carina Skrobecki Photography.

The day's color palette was inspired by Vanessa's favorite book and included rich fall tones with a touch of dusty rose. "I’ve never seen such a perfect palette in all my life," says the bride.

Vanessa has known her 'maids for over 12 years—and her MOH since second grade—so she wanted them to look like themselves on her big day. She says, "I knew they’d all look great in gold, and they chose all their dresses by themselves individually from different stores and designers but it all worked and looked fabulous!"

For herself, Vanessa chose a beaded gown by Galia Lahav, which she customized with the help of The Dress Theory in Seattle. Chris wore a gray wool three-piece suit by Hickey Freeman.

At first, Vanessa and Chris admit that they didn't want to have a ceremony, but they ultimately decided to say "I do" in a place that was both romantic and intimate. Darci Greenwood of Greenwood Events describes the setting as a "comfortable space for their guests" and a "place that felt safe from all cares in the world." They created this environment by transforming an open barn space with an arch of fall foliage and an aisle of candlelight.

"Chris and I originally wanted to have a courthouse ceremony at the adorable Flathead County Courthouse," Vanessa says. "Our parents really wanted a ceremony so we did the shortest and sweetest one we could with Sally, our officiant!" Chris joyfully carried Vanessa down the aisle as his friends from high school performed for both the processional and recessional.

After the "short but sweet" ceremony, Chris, Vanessa, and their guests headed to yet another barn for cocktail hour. The space was draped with locally harvested hops and filled with lounge vignettes of leather tufted couches and wine-colored linens.

The escort card table was decorated with a statement floral arrangement and gold calligraphed cards were organized around the centerpiece.

Dinner took place in a grand clear top tent. The entrance was marked with an archway of fall foliage and a faux cowhide rug. More lounge areas filled the tent so guests could relax before and after the seated dinner. "The most important thing was making sure the guests felt taken care of," Vanessa says. "So many people trekked all the way to the middle of Montana just for us, we just wanted it to be worth it for them."

Inside, the tent was decorated with more hops vine and 21 iron chandeliers. Harvest gold drapery was also added around the perimeter of the tent to give the whole space a warm and inviting feel.

Of course, the foodie couple's menu was a highlight of the night, as was the night's entertainment by Craig Barton & the Garcia Brothers Band—with Chris on the drums! "The highlight of the night was being surrounded and serenaded by so many people we love," Vanessa recalls. "Music is so important to us, the musicians(our friends) made it so special."

True to their travel style, Vanessa and Chris started their honeymoon in Black Forest, Germany. "Mainly to eat at Schwarzwaldstube in Hotel Traube Tonbach," admits the bride.

Officiant: Sally Hanger of Marry Me in Montana

Accommodations: The Firebrand, The Lodge at Whitefish Lake