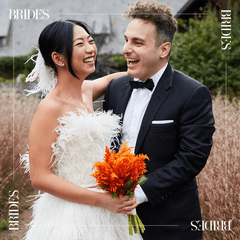 A Colorful Fall Wedding at Blue Hill at Stone Barns

Susan Nugraha, director of design for TAO Group, and Eli Klein, owner and founder of Eli Klein Gallery, met as all New Yorkers hope to meet their future spouse—at a bar! “It was a quiet Monday in November of 2015, and we were both at a bar in SoHo,” says Susan. “What started as a quick chat turned into meaningful conversation and laughter—and we saw one another every day that week!”

The couple dated for two years, and Eli had big plans to propose to Susan at Sushi Yasuda. “We stopped by his mother’s apartment on our way to dinner, and while I was in the bathroom he showed her the ring,” says Susan. “She convinced him to propose right there in her living room!” While it might be unconventional, it’s a memory the couple cherish, as the next day Eli’s mother was diagnosed with terminal cancer and she passed shortly thereafter. “If we could do it all again, we wouldn’t change a single detail of that special night,” says the bride.

A year before getting engaged, Eli had taken Susan to Blue Hill at Stone Barns in Tarrytown, New York, for her birthday, and she says they "left dinner wishing they could move in." “When we got engaged, it was so obvious that we had to get married there!” Susan says. So they invited 175 guests to join them on October 14, 2018, for an autumnal wedding that paired the venue’s incredible food and gorgeous setting with their Jewish and Chinese heritages (and a few tropical accents for good measure!).

Don’t miss all the personal touches these two creatives squeezed into their big day, photographed by Sidney Bensimon.

Susan had a large bridal party (with over a dozen ladies by her side!), so she kept their flowers simple. Each woman carried a single dahlia tied with a gray silk ribbon.

“I tried on over 100 dresses before finding this ostrich feather Kelly Faetanini skirt,” says Susan. When she couldn’t find the right top, Susan decided to create it herself, covering it with ostrich feathers as well. To mimic the gown’s soft finish, she carried a vibrant orange bouquet of celosia, and wore a simple pair of ivory Gucci loafers.

A gaggle of nieces and nephews served as flower girls and ring bearers, with the boys donning traditional Indonesian hats called blangkon.

With such a large wedding party, Susan knew choosing a single dress for all her ‘maids would be a challenge. “I asked them to wear autumn colors, shades of pink, ochre, and dark red,” says Susan. They topped their fall-hued ensembles with coordinating faux fur jackets, which ended up being perfect for the outdoor ceremony in October.

A Chinese tea ceremony took place during the pre-ceremony cocktail hour. The bride carried the elegant frosted glassware, which matched her metallic manicure.

Eli and Susan exchanged vows beneath a chuppah draped in tropical greenery and fall-colored blooms. “My father made the Batik tallis that was draped over the chuppah using symbols that represented a good marriage,” explains the bride.

The children made their way down the aisle ahead of the bride and her parents—and then requested a pause in the ceremony so one of the ring bearers could use the restroom!

“During the ceremony, Eli and I exchanged our own vows," Susan reveals. "They were completely off the cuff!”

Blue Hill at Stone Barns is known for its incredible cuisine, and the menu didn’t disappoint. Quail eggs stuffed with caviar were served in edible nests, and petite tarts held eggplant puree topped with farm-grown tomatoes.

Dinner took place upstairs in the barn, where guests sat at tables topped with small arrangements of orchids, roses, dahlias, and palm and fern accents. “The food and service were absolutely incredible,” says Susan of the wedding dinner. The meal included caviar with brioche, Maine lobster with fall vegetables, strip loin with potato puree, and a variety of passed desserts. “Each course was paired with wine, and they did a special non-alcoholic pairing for Eli, who doesn’t drink,” Susan recalls.

The couple’s wedding cake was topped with a dramatic anthurium and was made with alternating layers of chocolate cake and vanilla buttercream.

Shortly after their wedding, the couple departed for a honeymoon in China. “My family is Chinese, but I’d never been, while Eli is the leading dealer of Chinese contemporary art outside of China and has been dozens of times,” says Susan. “We got to travel the country by boat and train and were able to visit my great grandfather’s house. It was such an incredible experience.”