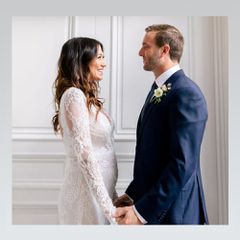 A Romantic Winter Wedding at the Bride's Family Home in California

Jessica Leao and Blake Francis quite literally found love on the run—at the annual Bay 2 Breakers race in San Francisco in May 2015. Three years later, they got engaged on their anniversary while celebrating at Ventana Inn in Big Sur, California.

For their wedding, however, the couple kept things close to home, marrying in the living room of the bride's mother's home in Hillsborough, California. "I loved the idea of getting married at such a special and personal place," Jessica says. "It also allowed us a lot more freedom when it came to planning." By her side in the planning process was Ashley Smith of Ashley Smith Events—and her mother! "We had only a few months to plan our wedding, so we hit the ground running from day one. I don’t know what we would have done without Ashley. My mom was also critical in the planning—she has a great aesthetic and it was her home," Jessica admits. "We started our wedding planning in August of 2019 and found out we were pregnant with our little boy shortly after, so we decided to move the wedding from March 2019 to January 2019."

On January 5, 2019, everything came together to match the couple's vision, which Jessica describes as "winter whites" with a "modern ethereal vibe." "I wanted to create a really warm environment since it was in the middle of winter and wanted the spaces we created to look like an extension of the home, which Ashley did flawlessly," Jessica says. "We wanted something very intimate." Keep reading to see more of Jessica and Blake's beautiful winter wedding at home in California, as captured by Jenn Emerling.

Jessica opted to wear a long black dress and a faux fur jacket for the rehearsal dinner the night before the wedding.

Marigold SF executed all of the day's flowers—from the flower girls' crowns to the boutonnieres and beyond. "We used seasonal flowers—lots of winter white, with green accents and pops of dusty rose," Jessica says.

I knew I wanted a long-sleeved, lace dress—something sophisticated, with a bohemian flair.

"I knew I wanted a long-sleeved, lace dress—something sophisticated, with a bohemian flair," Jessica says of her wedding dress. "I tried on several by the designer Lihi Hod and loved them all but one a bit more than all the rest!" While Jessica admits that finding her dress was the easiest part of planning, she says it was also the hardest. "I picked out my dress within weeks of being engaged before we had a venue or date...and then I became pregnant and had to find a way to make a custom, fitted dress accommodate my growing belly," she says. "Thankfully, I found the most talented seamstress at Wee Scotty in San Francisco, and we went week by week to make it perfect!"

Jessica's dress-shopping advice? Do your research and eat something before you go. "Dress shopping can become overwhelming with options and only so much time to try them on," she says. "At the end of the day, it matters most how you feel in the dress, don’t let others opinions weigh too heavily. Enjoy the moment!"

Jessica and Blake go ready separately, so parts of the home were off-limits to boys and girls to keep everyone from seeing each other too soon!

"We decided to forgo the wedding party. We have many loved ones we would have wanted to be involved, but we decided to go for a more intimate occasion with just the two of us and had limited time to plan," Jessica admits. "My mother was my maid of honor and Blake’s father was his best man." That said, they had their two nieces as flower girls.

The couple's nephew acted as their ring bearer and looked adorable (and winter-appropriate!) in a velvet blue suit.

The couple did a first look in the stairwell of the bride's family home. Since they did everything at home, Jessica says they were able to see the details come together. "We got to see the entire space unfold day by day, hour to hour," she says. "It was amazing—and, at times. very anxiety-provoking, haha—to watch the transformation."

Jessica completed her look with her mother's diamond necklace and a lush bouquet from Marigold SF.

"We had a hot cider station as people arrived, which was perfect because it was pouring rain and freezing that day, and hot apple cider on arrival was a huge hit," Jessica recalls. "At the bar, we had Vesper martinis!"

Guests left cards (and gifts!) at a table that welcomed them to the wedding. "We wanted our wedding to be memorable—not only for all of the many details but also for how our friends and family felt that day," Jessica says. "We wanted to create a moment that allowed our guests to experience our love, and become part of our love story."

The architectural details of the home were highlighted with romantic candlelight and arrangements of roses and baby's breath.

"Marigold created a beautiful altar flower for us and provided floral accents throughout the space," Jessia says. "It was a really warm, inviting atmosphere."

My 93-year-old grandfather walked me down the aisle. It was such an honor to have him at our wedding!

"My 93-year-old grandfather walked me down the aisle," Jessia says. "It was such an honor to have him at our wedding! My father greeted me at the end of the aisle and 'gave me away' to Blake, my now-husband."

The ceremony took place indoors in front of a window to let natural light in.

There have been very few times where we both have felt so present and completely caught up in the moment. It was the first time we had heard each other’s vows, and the rawness of our emotions left a lasting impression.

The couple exchanged vows they'd written themselves. "We each wrote our own vows, and this may have been one of my favorite parts of the entire wedding," Jessica admits. "We kept them a surprise from one another, until the day of, making the emotions that much more raw. I was in tears watching our vows during our wedding video and during the ceremony."

"It didn’t matter how many times we had rehearsed, on the day of, it all felt like the first time," Jessica says. "There have been very few times where we both have felt so present, and completely caught up in the moment. It was the first time we had heard each other’s vows, and the rawness of our emotions left a lasting impression."

The exit! The newlyweds processed down the aisle hand-in-hand to music from their DJ, Heart of Gold.

After the ceremony, the couple took time to relish at the moment before joining their guests at cocktail hour.

Dinner and dancing took place in a tent that was set up outside the house. "We had to scale down our wedding quite a bit in order to fit all of our guests into my parent’s home," Jessica says. "We had to be very creative with the use of space, but someone we managed to make it work."

Ashley Smith created a custom light piece that hung over the dance floor. "Lighting was huge, we lit everything! I custom designed the tent over their backyard pool, and therefore had some permanent things to work around in the space, such as a pergola that didn’t move," she says. "Adding the right lighting does wonders! We also created a custom chandelier over the dancefloor to fill the top of the tent and bring the whole tent together."

"Jessica really wanted a winter wedding and the only real directions I was given were to make it look like Restoration Hardware," Smith says. "We kept the décor in the white, blush, and blue tones as a nod to more traditional winter hues. I think the tables with the blush and blue against stark white linens were very pretty."

"There was a giant storm on the day of our wedding with fast winds and lots of rain, which subsided right before the ceremony," Jessica recalls. "Then, when we were all in the tent for dinner and during one of the speeches, it began to rain, and then the sky opened up and the moonlight poured in. It’s hard to capture in words how this moment felt...it was just beautiful, so serene. Many had joked that we intentionally created such an ambiance, the timing had been so perfect! It made rain on our wedding day one of our most favorable memories."

According to the bride, LRE "crushed the catering" with a menu that included carrot and ginger soup shots, fresh burrata, slow-roasted salmon, and tenderloin. "The food was incredible—the mini slider appetizers were a huge hit," she adds.

The couple danced to "You Are So Beautiful To Me" by Joe Cocker for their first dance.

Jessica and her father selected "I Loved Her First" by Heartland for their special dance.

Toward the end of the night, Jessica slipped into a metallic gown that was a big hit on the dancefloor.

Jessica's advice for other couples? "Savor the moment! It goes by so fast, too fast! It’s hard not to get caught up in all the details and stress of a wedding but in the end, it’s the feeling of the day that creates all the memories. Embrace and enjoy it!"