18 Types of Rings Everyone Should Know

There's more to the jewelry category than just engagement rings and wedding bands.

Kara Nesvig is a writer specializing in beauty, celebrity, style, and pop culture.

When you hear the word "ring," visions of diamonds and glam cocktail baubles probably pop into your head. (The lollipop rings of your youth count too!). While the classic Tiffany solitaire diamond ring is what you tend to see when you Google "ring," there are so many different styles and types of rings to know, from traditional mother’s rings to stackable bands to the ‘70s mainstay mood ring.

"Everyone enjoys wearing rings because you see them the most," says Sharon Schatner at Filigree Jewelers in Minneapolis. "When you’re wearing earrings you don’t see them unless you look at the mirror, but you look at your hands all day long and can enjoy them."

Below, expand your knowledge and learn more about some of the most popular ring styles. You may have worn a few in the past (hello, birthstone rings!) or are considering adding a certain type to your jewelry collection.

Introducing VRAI x Brides: Shop our exclusive collection of lab-grown diamond jewelry, perfect for the big day and beyond. 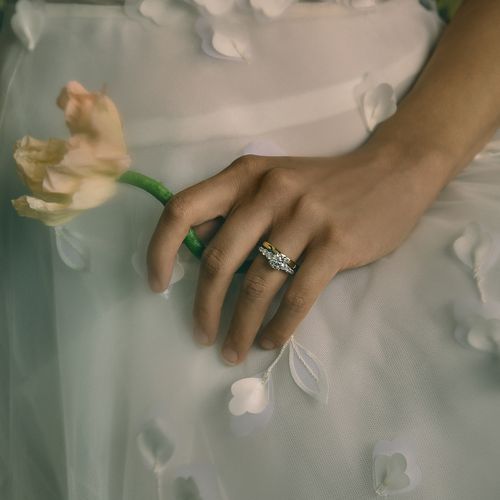 It wouldn’t be a complete list of rings to know if we didn’t include the ultimate ring: the engagement ring! "The history of trading a ring at the ceremony dates back thousands of years. A band of metal was considered a token of blessing sealing the bond of love," says Catherine Thies, owner of Filigree Jewelers.

These days, anything goes when it comes to engagement rings, from elegant and simple diamond solitaires to bold, attention-grabbing gemstones. "The trend that we are seeing right now is big and bold yellow gold. Brides are moving away from the more delicate thin diamond mountings to rings of more substance," adds Thies. "We also have seen a huge demand for antique and vintage rings as many of our clients love the sustainability factor of not dipping into new resources and wanting something completely unique that you will not see on other people."

Whether you go for a classic gold wedding band, a ring studded with sparkles, or something new and trendy like a tantalum band, wedding bands are a symbol of your love and commitment to your spouse.

Stackable rings give you the option to create something totally unique with your wedding set. Thies and Schatner recommend starting with a wide solid gold band or diamond band, as they tend to go with everything, but your stack is totally up to you. "What makes stacking cool is that no two stacks are alike," explains Schatner. "The uniqueness of the textures, stones, and finishes ... otherwise it’s a row of rings that are all the same. Some variety in your stack is what makes it interesting. It’s like a good mixtape."

Mood rings had a big moment in the spotlight in the '70s and again in the '90s, but they’re still around today. These novelty rings claim to predict your mood based on their color. Obviously, this has more to do with your body temperature than how you’re feeling, but they’re fun regardless.

Signet rings were traditionally worn by men of influence and have been worn since ancient times; they were even found amidst the treasures of the pharaohs of ancient Egypt! Today, you can customize a signet in so many different ways and choose between sentimental vintage pieces or more modern designs. Engrave it with your initials, a special symbol, or even a family crest if you have one.

Traditionally, a mother's ring includes the birthstones of each child worn in a cluster style. If that’s not exactly your go-to look, you can opt for an updated twist on the mother’s ring by stacking gemstone bands together or making them more modern with updated cuts and settings. "All tradition is thrown out the window when it comes to commemorating an anniversary or a birth. We have been able to make some pretty mother’s rings with gemstones that happen to have colors that work well together," explains Thies. "But if the birthstones clash we say don’t force it. Pick something that speaks to you rather than trying to make something that in the end looks hodgepodge and weird."

Did you have a birthstone ring as a child? Those mini faux gem rings you could buy at the dollar store or in gift shops were a popular way to broadcast your birth month to the world, or perhaps you received a special piece with your stone as a gift for an important occasion. "The list of birthstones became standardized in 1912 with notable additions in the 1950s (alexandrite, citrine, pink tourmaline, and zircon) as well as in 2002 with the addition of tanzanite for December," explains Thies. "With multiple birthstone lists to choose from, modern vs. traditional, there are a ton of options in choosing the best gemstone for daily wear."

If you don’t like your birthstone, choose a stone you do like instead—the rules don’t apply anymore. "The current list we’ve been using for 100 years was created in part with a nod to history and stones that have been associated for millennia with certain times of the year," Schatner says. "But more than that, it was dictated by what gems were available [for shopping]. If you don’t like your birthstone, pick your own!"

Cocktail rings don’t have to be worn exclusively to make a statement. They’re becoming increasingly popular as engagement rings for couples who are looking for something unique and colorful. "Cocktail rings gained popularity in the roaring '20s and never left," says Thies. "The idea that your life was so opulent that you would have multiple rings was a sign of success." If you’re looking to purchase your first fabulous cocktail ring, Thies recommends choosing something that suits your lifestyle in a tone that works with your wardrobe. "If you wear a lot of earth tones look at gemstones that complement the colors like citrine or tourmaline," she says. "We also encourage a right-hand ring that is all metal; you can get a lot of mileage out of a big gold stylized cocktail ring."

As the name implies, baby rings are rings for, well, babies. They first became popular in Victorian times and were given as a gift for a new baby. As the child aged, the teeny tiny ring could be worn on a chain.

Anniversary rings are often given on a milestone anniversary, like 10 or 20 years, and are typically worn as part of your wedding set. These can be gold, silver, or diamond bands or separate stone bands worn in a stack.

The Irish Claddagh ring includes three key symbols: a heart for love, two hands to symbolize friendship, and a crown to symbolize loyalty. The Claddagh dates back to the 17th century and is known for the message it sends depending on how you wear it. For example, if you wear on your right hand with the heart facing you, that means you’re in a relationship. If you wear it on the same hand with the heart facing out, you’re looking for love.

A right-hand ring is often thought of as a special piece you buy for yourself to celebrate a milestone—or just because you felt like it! "We see a lot of people buying rings for themselves when they get a promotion, they get a degree or some personal achievement or to mark an occasion," explains Schatner. "We’ve had wonderful clients buy right-hand rings to commemorate going through cancer or as a dedication or memorial. Sometimes it’s a sentimental piece that we rework to [suit their style]." Whether you’re rocking a bold cocktail ring or a delicate piece on your right hand, you’ve got a plethora of options to make your own.

Especially popular in Southwest-inspired jewelry, turquoise rings are a gorgeous and colorful statement. They hold special significance for Native American tribes and artists, who create and wear stunning pieces featuring the stone. "Turquoise is significant in Native American art because it’s the color of the sky and associated with the heavens and the Creator," explains Schatner. "It’s meant to be a peaceful stone that gives the individual peace and also thought to enhance your ability to communicate as it’s associated with the throat chakra."

Turquoise rings tend to be set in sterling silver and the stone is unpolished to let its natural beauty and uniqueness show. Turquoise jewelry also became associated with the counterculture of the '60s.

Class rings are often purchased by graduating seniors as a way to commemorate their high school years or by college grads to show their school spirit.

Schatner says Filigree Jewelers has noticed an emerging trend in men’s engagement rings. "The younger generation doesn’t subscribe to the traditions and is making a lot of their own," she says. "I think that’s really cool."

Promise rings are typically given as a "pre-engagement ring" of sorts, meant to signify a commitment to the future.

Posie rings (also called posy rings, poesy rings, or posey rings) were popular in medieval times and were often given as tokens of affection between lovers or as a signal of secret love.

Snake or serpent rings symbolize eternal love. While snake rings have been worn throughout history, one of the most popular snake rings in history is the one Prince Albert gave to Queen Victoria, sparking a trend amongst the Victorians.

20 Couple Rings for You and Your Partner