Plus, all the details on this historic and famous piece. 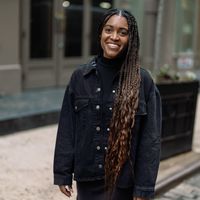 Corinne Pierre-Louis
Corinne is a fashion expert and editor at Brides. She also worked at Vogue Magazine, then later as a talent manager for social media influencers in the fashion and beauty space.
Brides's Editorial Guidelines
We independently research, test, review, and recommend the best products—learn more about our process. If you buy something through our links, we may earn a commission.

Princess Diana is one of the few royals who have made a significant mark on history and culture. Dating back to 1980, when she and then Prince Charles (now King Charles III) began dating, the former Lady Spencer was immediately adored by the world, establishing new a definition around the term "celebrity royal." Even today, years after her untimely passing, her life and legacy are still celebrated and talked about wherever you go.

With the current season of Netflix's The Crown, all eyes have returned to the late princess's life, and as a result, many have been looking back to one of the most memorable days of her life—her engagement. On February 24, 1981, Charles and Diana officially announced they were getting married during a public photocall to millions around the world. Aside from her off-the-rack Harrod's blue suit, it was her engagement ring that really made a splash on front-page news.

Known as one of the most famous and recognized pieces of jewelry in history, the ring is a 12-carat, oval Ceylon blue sapphire, framed by a halo of 14 diamonds, and set in 18-carat white gold. It is estimated to have been worth $600,000 when purchased, and what's more, the sale of the ring came with a bit of drama as well.

The late Princess of Wales chose her sparkler from crown jeweler Garrard, a departure from royal tradition that typically encouraged members of the family to repurpose heirloom stones. Meaning, the public had access to the same catalog of jewels owned by the royal family, which reportedly didn't sit well with the queen. Ultimately, whether the piece was custom or not, it didn't stop the world from falling in love with this ring and establishing it as a royal icon.

While there's no way of owning Diana's actual ring today (Prince William gave it to Kate Middleton when he proposed), many brides-to-be often turn to this design for their own royal-inspired pieces. So ahead, we've put together a list of our favorite Princess Diana-inspired rings that are available to shop now. 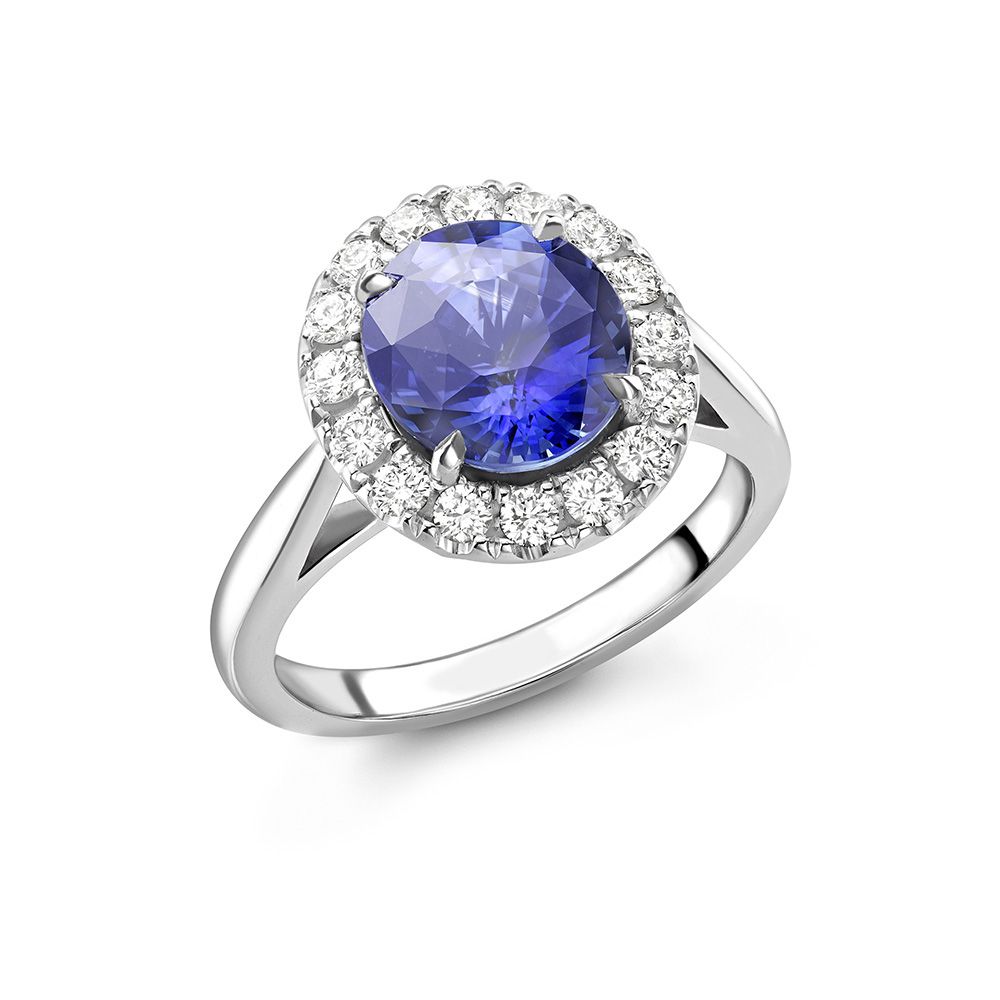 Almost identical to the ring the late Princess of Wales wore, this sparkler from Emma Clarkson Webb features an oval cut sapphire, a halo of diamonds, and an 18-carat white gold band. According to the brand's website, the Ceylon blue sapphire was the main source of inspiration for this piece, which follows the same design aesthetic as the princess's famous rock. 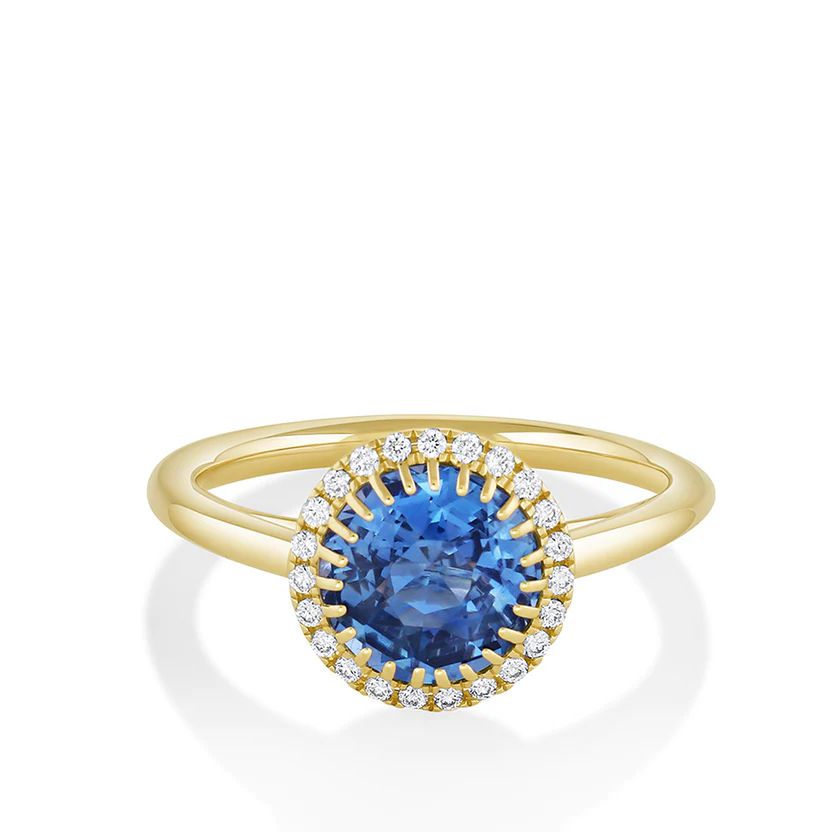 This gorgeous ring is a slightly different, but modern, take on Diana's blue sapphire stunner. While it features a yellow gold band, the rest of the ring still embodies the princess's classic design—from the blue center stone to the diamond-encrusted halo. 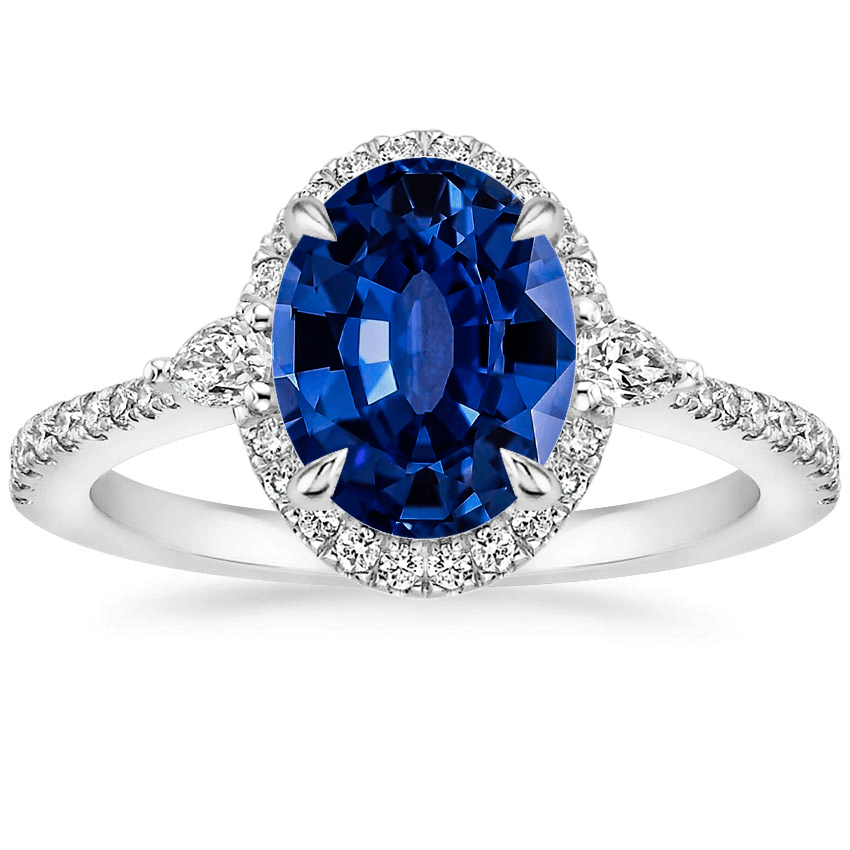 For those searching for an eco-conscious royal piece, Brilliant Earth has got you covered. Its lab-created, sapphire luxe Aria Halo engagement ring is a lovely version of Diana's rock, but with an environmentally friendly twist. 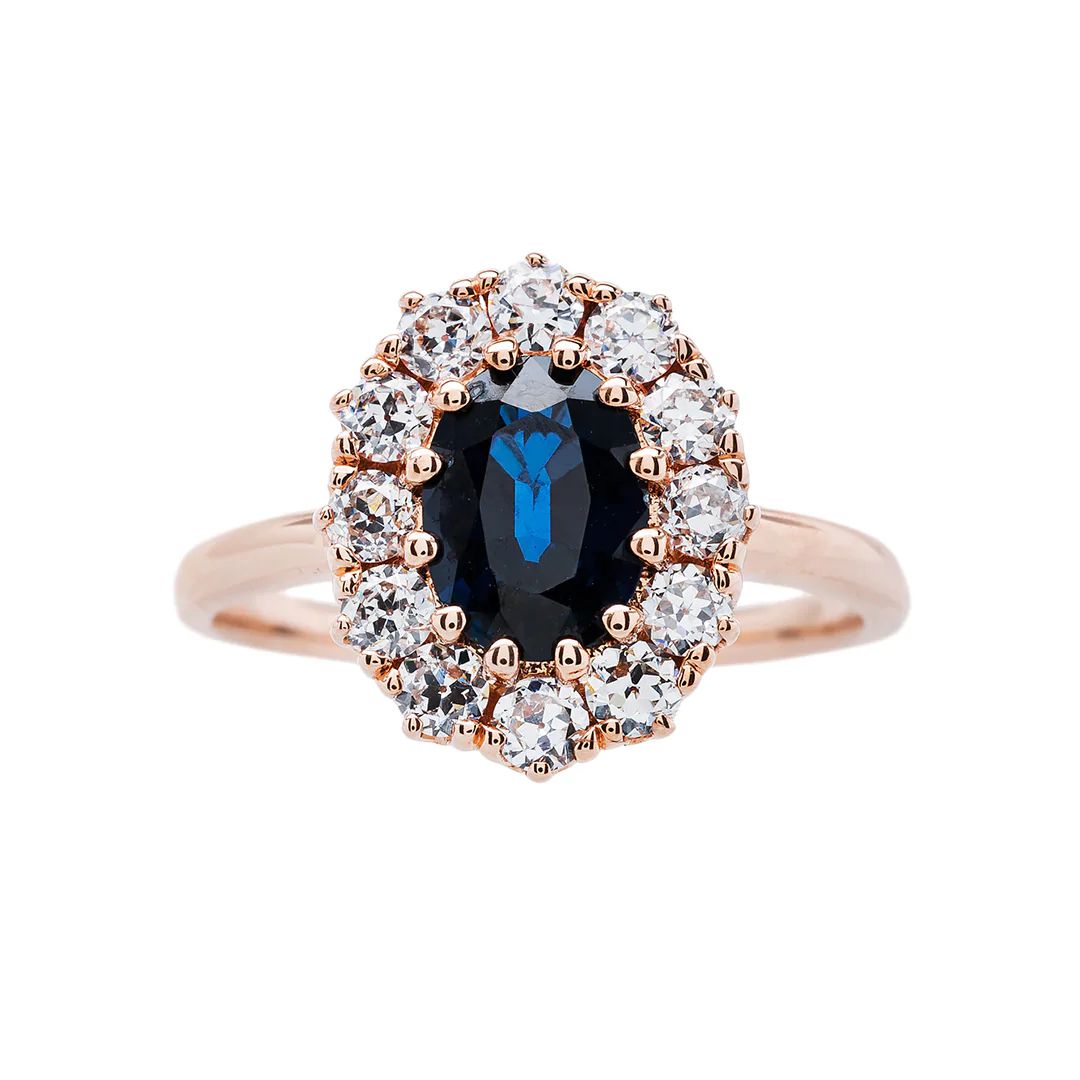 Though this gorgeous engagement ring wasn't designed with the princess in mind (the website states that it's Victorian-inspired), it's hard not to see the similarities between the two styles. The midnight blue sapphire is surrounded by a halo of 12 round brilliant cut diamonds, all perfectly set in 18k gold. 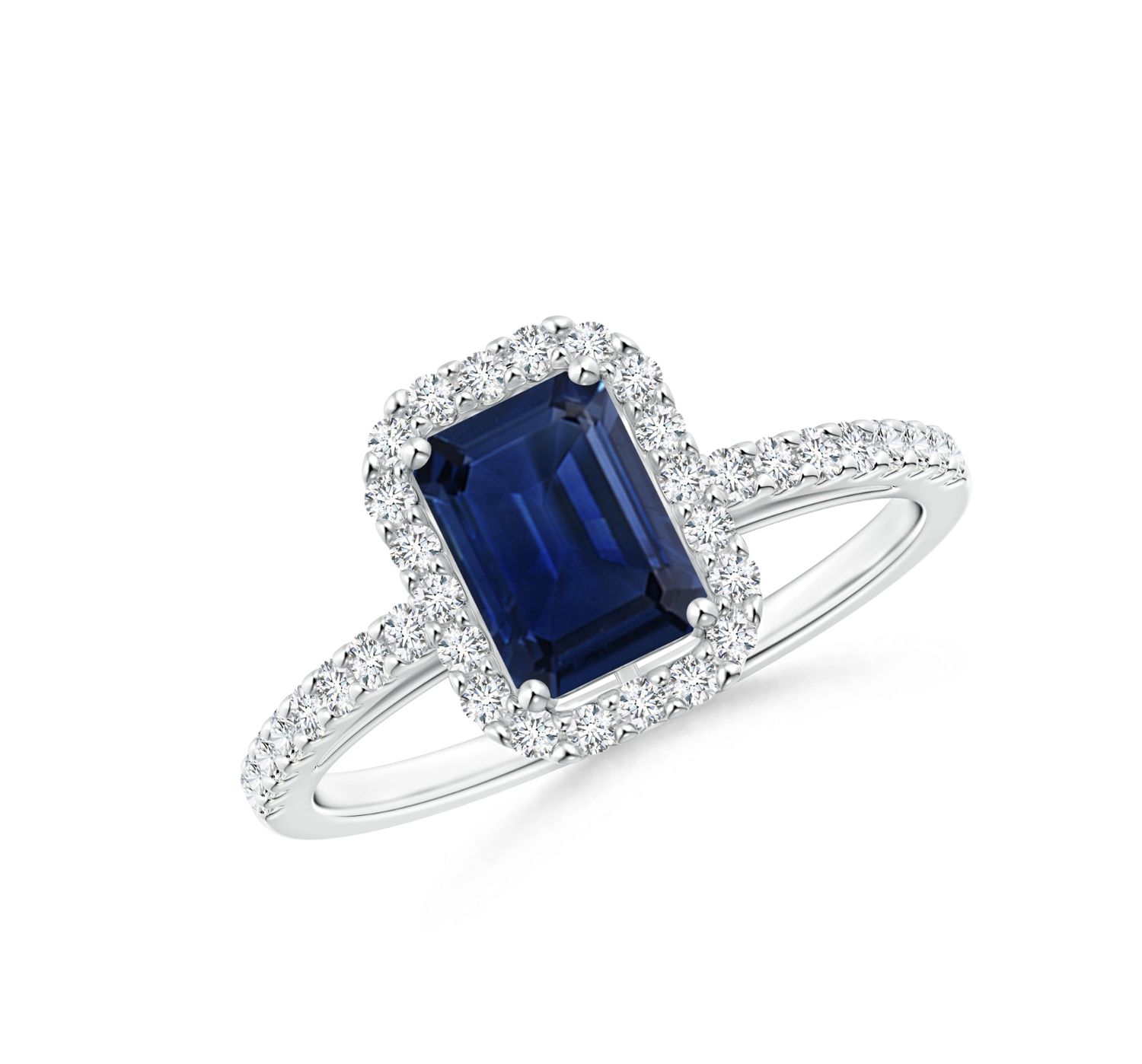 We absolutely love this unique take on Princess Diana's engagement ring. Instead of an oval center stone, this piece from Angara features an emerald-cut blue sapphire, set in 14k white gold. You also have the option to choose between four gemstone qualities, three-carat weights, and four metal hues for a customized look. 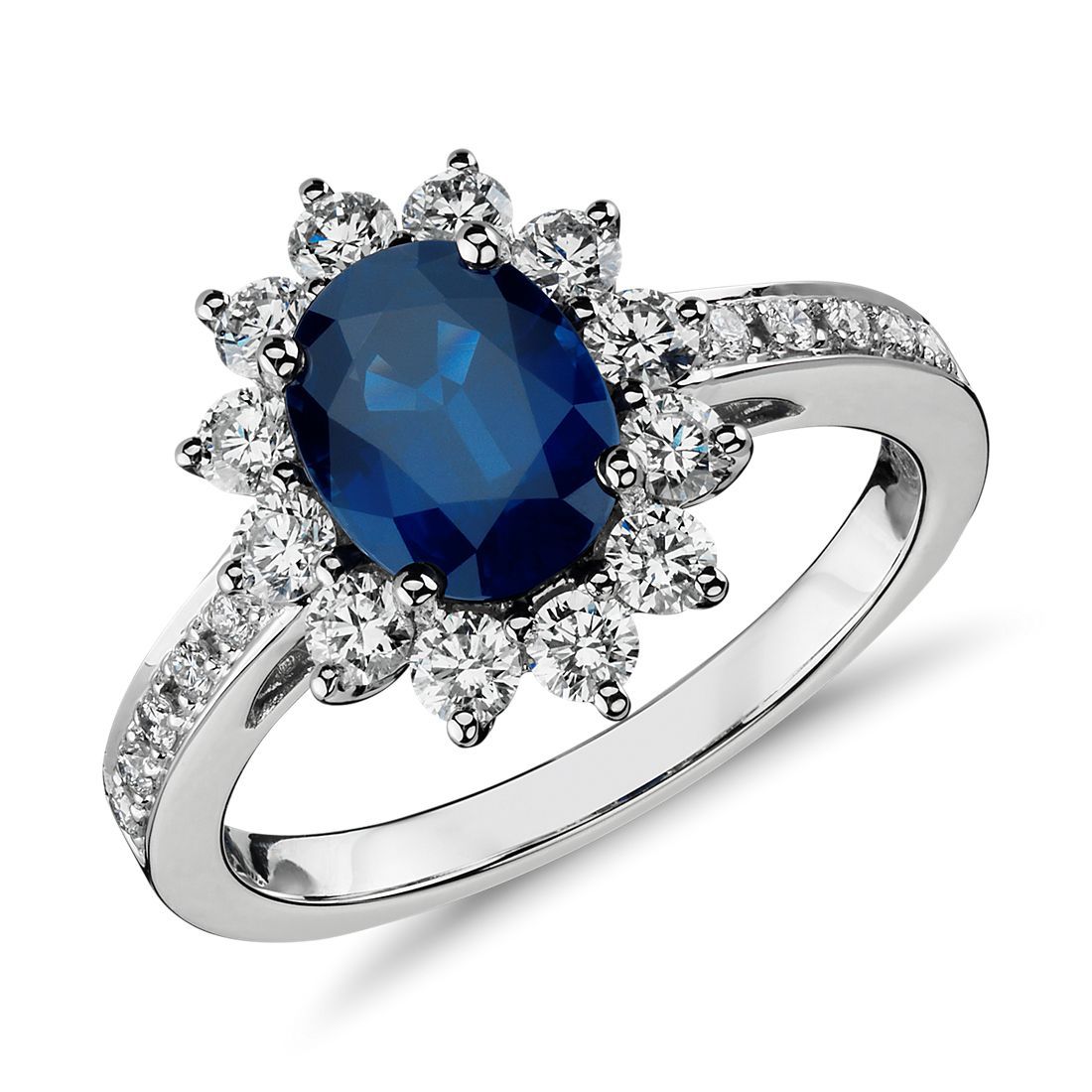 You will absotlely stand out with this stunning, oval blue sapphire ring from Blue Nile. Featuring a starburst-like halo, we can absolutely see this piece being worn by a statement-making bride, just like the royal princess herself.

Everything to Know About Prince Charles and Princess Diana's Relationship