Everything You Need to Know About the Korean Paebaek Ceremony 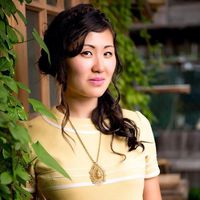 The paebaek ceremony is one of the most important—and often, most enjoyed by wedding guests—moments of a traditional Korean wedding, emphasizing the importance of family to Koreans.

What Is the Paebaek Ceremony?

The paebaek ceremony (also spelled pyebaek) is an intimate Korean unification tradition historically performed after the main wedding ceremony to symbolize the entrance of the bride into her husband’s household.

Paebaek features Korean historical traditions like formal bowing, a tea ceremony, and the couple catching chestnuts and dates. Read on to learn more about the meaning of the paebaek ceremony and how to plan and perform one yourself.

The History and Meaning of the Paebaek Ceremony

In Korea, the bride historically would come to live in her in-laws’ household, becoming a permanent part of their family. For this reason, the paebaek traditionally involved only the groom’s family, the groom, and the bride. The paebaek is part of a larger post-wedding ritual process called the Hurye, which historically commenced with the bride parading to the groom’s house in a porter-carried, tiger pelt-covered palanquin—a processional called the woogwi. As part of Hurye, three days after the woogwi processional, the couple visits the groom’s family shrine to pay respects, in a ceremony called hyeonsadangrye.

Modern versions of the paebaek have given equal footing to the bride’s parents, fully including them in the ceremony historically only reserved for the groom’s parents and the couple. As traditional Korean wedding planner Estella Park explains, many couples of today choose to perform the paebaek during the post-wedding cocktail hour.

Estella Park is a co-owner and wedding planner of family-run business LeeHwa Wedding. For five generations, LeeHwa has been creating couture Korean traditional garments called the hanbok in Los Angeles and serving as the bridge between the Los Angeles community and the roots of Korea. Now offering special event services such as the Paebaek Tea Ceremony and Korean Traditional Wedding planning, the mother-daughter duo helps clients keep in touch with their ethnic roots and embrace their heritage.

Now, the modern paebaek is often shared with all wedding guests instead of following the tradition of being a private affair conducted behind closed doors.

What do I do if I do not perfectly perform the paebaek?

“Everyone performs it incorrectly, and that’s the fun of it. To have it memorized and practiced to a T makes it so somber and serious. It’s more fun to make a few mistakes and have some laughter during the ceremony,” Park says. LeeHwa offers a service where an attendant goes out and helps with the bowing and guides the whole process, helping the bride up from each bow and lower to the ground for each bow.

Can guests take photographs of the paebaek?

Yes. Though traditionally it was a private ceremony and the true meaning of the paebaek is a ceremony to show respect to the parents, now it’s used to display Korean culture and traditions to all the guests. Unless the couples said no photos or no flash, it should be fine to proceed.

Is it appropriate for guests to cheer during the paebaek?

Yes. Since the modern paebaek is open to all the guests, usually the emcee will joke and guests will laugh and cheer, especially during the tossing of the chestnuts and dates to predict the number of children. “The paebaek can be a fun, loud event these days,” Park adds. “If the mood is somber or private, then of course it will not involve cheering.”

What should I wear to the paebaek?

It’s up to the parents, but traditionally the parents would wear hanbok. “Nowadays, we see just the mothers wear hanbok, and the father wears a suit,” explains Park. “Even more recently seen, both parents will just wear a regular dress and suit. Guests will wear normal wedding attire according to the dress code.”

Should gifts be presented during the paebaek?

Unless you are one of the parents or a very close relative invited to participate in the paebaek, it’s best to follow the wedding ushers’ guidance, such as placing any gifts on a gift table. Parents would place money in white envelopes for the paebaek.

Do I have to do the piggybacking as a groom?

It’s not absolutely necessary to piggyback the female participants (bride, mother, mother-in-law) as part of the paebaek ceremony. You will discuss whether this will be done while wedding planning. Park says only about 15 or 20 percent of the weddings she plans involve the piggybacking, but if the groom is more humorous and wants to put on a show, he may do it. A more somber, private, family-only ceremony may choose not to. In either case, discuss beforehand with all parents and participants.

How to Plan a Paebaek Ceremony

Prior to the ceremony, the couple should choose an attendant (typically a bridesmaid or the maid of honor) to assist in set-up and clearing, as well as help the bride bow.

Set up a bamboo area mat, preferably one large enough to fit the bride and groom. If not available, a neutral tan carpet or a jute rug may function as a substitute. Then, position a low table, preferably a traditional Korean rosewood table, in front of a decorative background panel featuring nature scenes such as flowers, mountains or trees. Place a red and blue silk cloth on the table and place Korean silk cushions behind the table for the parents who will be sitting there.

If you’re struggling to find an authentic Korean background panel, a folding screen featuring nature scenes may work in a pinch.

Pile the parents’ table with fake food towers. According to Park, there is a great deal of meaning in the food on the table, and it’s one of the most historical and important parts of the paebaek ceremony. Traditionally, there are nine foods, each representing fullness and the bridal couple’s lifelong union. The dates on the table symbolize the couple rising early and working hard, while the chestnuts help ward off evil spirits. When chestnuts are not in season during the spring and summer, walnuts are used in their place.

Dried meats and sweets on the platter represent the bride’s mother treating her new son-in-law with kindness and generosity, while ginkgo nuts represent the parents’ eternal faith to their sons. If you can’t rent or buy the fake food towers locally or online, you can try fashioning your own. Obtain some Korean wood serving trays and create one tower of chestnuts and dates, one serving tray of yukpo (flat beef jerky), and a third platter of eight little appetizers of anju, or snacks. Place a matching, smaller, round, low rosewood table next to the bride and groom’s bamboo area mat, and place a small traditional Korean teapot and the number of appropriate handleless cups on that small round table.

The bride wears the Korean traditional paebaek robe over her hanbok, and some brides will choose to adorn their cheeks with red dots, either via makeup or stickers, to represent youth and virginity. The groom’s paebaek robe resembles those worn by the lowest ranking officials during the Joseon Dynasty. Park says that since a marriage represented the most important event in a man’s life, the groom was allowed to wear this royal uniform for one day, even though he did not hold any position in the palace. The parents may wear traditional hanbok or the father will sometimes wear an elegant suit.

How to Perform a Paebaek Ceremony

First, have the groom’s parents sit behind the table in front of the backdrop of natural scenery. Once the groom's parents are situated, the attendant will alert the couple to enter and bow with a full fold at the waist at a 90-degree angle (called jageunjol, or little bow) in the direction of the groom’s parents. The bride’s grand bow (kunjeol, or big bow) differs from the groom’s grand bow. She will stand with the back of her hands against her forehead, and hold that position as she slowly kneels and bows until the hands touch the ground in front of her. The bride will need help from her bridesmaids or attendants to kneel properly. The groom will just kneel slowly, placing his hands on the ground and lower his head. After the first full bow, the couple will stand up and perform another half bow from the standing position before taking their seats.

After the groom's parents receive their bows, the couple will then bow to the bride's parents (who are seated behind the table) and distant relatives. It is also customary for distant relatives receiving bows to bow in unison while they sit.

The bride and groom will then serve tea or rice wine to both sets of parents and relatives. Because of the bride’s long sleeves, she will have a bridesmaid, aunt or attendant deliver the tea. The attendant, if pouring, would always do so with two hands and give with two hands. Parents may receive with one hand and drink with one hand.

After the parents and relatives drink the tea, they will take turns offering advice, words of wisdom and blessings to the bridal couple. Relatives and parents will then sometimes give the couple white envelopes containing money to help them on their new journey. It is important that the bride and groom receive any gifts with two hands, rather than just one, to show respect.

Throw the dates and chestnuts.

Now, the groom may or may not, depending on his confidence, piggyback the bride once or twice around the table. If the groom is feeling confident, he may carry his mother and his mother-in-law around the table as well. Discussing in advance whether the piggyback will happen or not is advised. One’s mother or mother-in-law may prefer not to participate in this section of the ceremony.

8 Tips for Planning a Multicultural Wedding