A one-of-a-kind engagement ring to complement a unique love story. 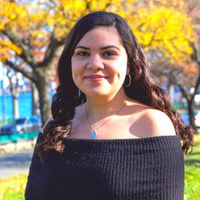 Ariana Quihuiz
Ariana Quihuiz is a freelance writer and content manager. She is currently the content manager for wedding gown brand Lyra Vega Bridal, covering bridal fashion, bridal beauty, wedding trends, and more.
Brides's Editorial Guidelines
We independently research, test, review, and recommend the best products—learn more about our process. If you buy something through our links, we may earn a commission.

A gorgeous pop of color and a one-of-a-kind engagement ring style, it’s no surprise why gemstones have become more and more popular amongst many brides-to-be. Moss agate is no exception, as its green inclusions, which range from light to dark green, offer an eye-catching style that will pair beautifully with a variety of metals, cuts, and settings. While most engagement rings may stray from the tradition of diamonds, this gemstone is a statement choice that is thought to have many spiritual and natural properties.

What Is a Moss Agate Engagement Ring?

Moss agate is a semi-precious gemstone that is a type of chalcedony quartz. It typically has a milky white or clear base with green dendritic inclusions (created by the oxidation of minerals) which give the stone its unique tendril patterns.

“Many consumers these days are drawn to alternative gemstones for their engagement rings for a variety of reasons, but most often I find that they are seeking a reflection of who they are as people and what values they hold,” says Megan Bea, founder of The Bea Line. “The inclusions in moss agate are reminiscent of forest floors and seaweed on the waves, making it a beautiful choice for nature-loving and outdoorsy couples.”

Megan Bea is a jewelry designer and owner of the jewelry brand The Bea Line. She received a degree in jewelry design from FIDM and creates pieces that include unusual gemstones.

Interested in learning more? Discover the history of moss agate, what makes it a great choice for an engagement ring, and where you can purchase this unique style.

Moss agate is also known as the mocha stone—an alternative name that was derived from the Arabian city of Mocha in Yemen, which was an ancient source of gemstones.

As far back as 18th century Europe, moss agate was known as a stone of good luck or fortune. People would often place it around the house and in other areas to attract wealth, prosperity, and abundance. Farmers at this time also used moss agate as a talisman, believing that the green inclusions of the stone would help their crops thrive.

What's more, moss agate has been thought to have many spiritual properties as well. When used as an amulet, moss agate is believed to encourage tranquility and emotional balance. This stone is also presumed to clear blockages and balance the heart chakra so love and abundance can flourish. While this stone has been traditionally used as a lucky talisman, its ties to the heart chakra make it very fitting for an engagement ring that symbolizes the start of a lifelong partnership.

Moss agate is an excellent choice for anyone looking for an affordable and one-of-a-kind engagement ring. "When you choose a moss agate engagement ring, you are choosing a ring that is as unique as yourself,” says Bea. “No two stones will ever be quite the same, and I think that's a beautiful metaphor for your unique union with your partner.”

Bea also notes that this engagement ring style is less costly than a diamond option, which can be an added draw for couples who plan to save for a wedding or a home. However, affordability varies based on the design you choose. “Pricing will vary widely, and the cost will be mostly dependent upon the other features of the ring like the type of metal used and any other accompanying gemstones used in the design,” explains the jewelry designer.

The Best Engagement Rings under $5,000 for the Cost-conscious Bride

While there are not many cons when it comes to moss agate engagement rings, Bea notes that you should be aware of the durability of this gemstone. “Moss agate is a bit softer than a diamond, meaning more care should be taken when wearing the ring.”

What to Look for in a Moss Agate Engagement Ring

Considering moss agate for your engagement ring? Here’s everything you need to know.

How to Care for a Moss Agate Engagement Ring

Since moss agate is considered a softer gemstone, Bea recommends treating your ring with more care than you would a diamond ring. “I would recommend removing the ring whenever there is a risk of impact to the stone,” shares Bea. “For example, when using gym equipment, doing household chores, gardening, etc.”

Moss agate should also be cleaned using a soft-bristled toothbrush, warm water, and a few drops of natural soap. “Gently clean around the stones and the setting, and then rinse clean and polish with a soft cloth or jewelry cleaning cloth,” Bea recommends. “Avoid any cleaners that contain harsh chemicals or alcohol.”

How to Take Care of Your Engagement Ring 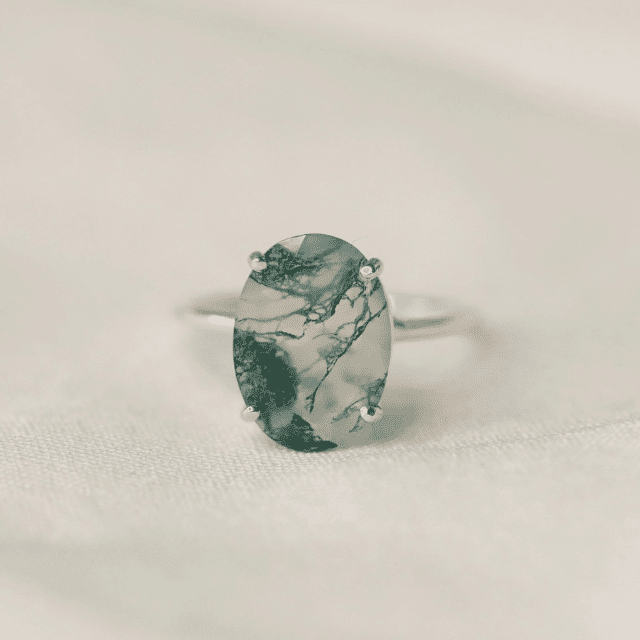 If you're looking for a simple setting, this minimalist solitaire option is a perfect pick. Featuring an oval-cut moss agate stone and four prongs, this ring is elegant and sleek. 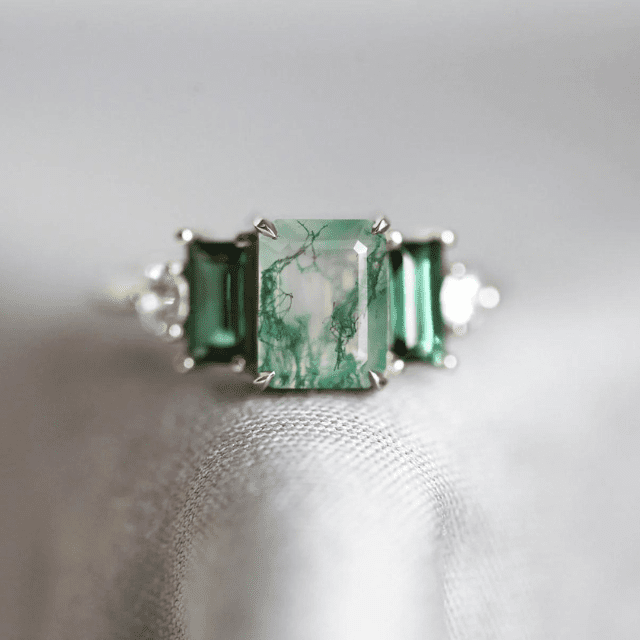 This Art Deco-inspired ring stands out for its modern look. The moss agate emerald-cut stone is flanked by baguette-cut tourmalines and round-cut white sapphires. The tourmalines emphasize the green accents in the main stone. 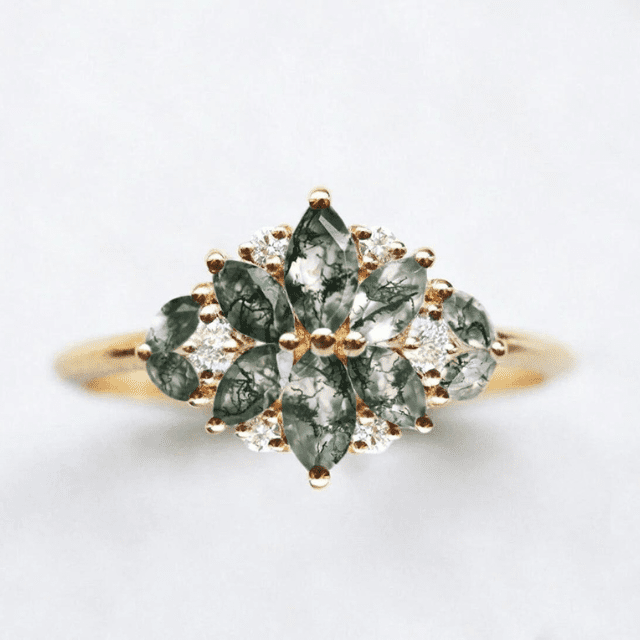 Go even more out-of-the-box with this moss agate cluster ring. The stones are interspersed with round diamonds for an unexpected result that is chic and cool. 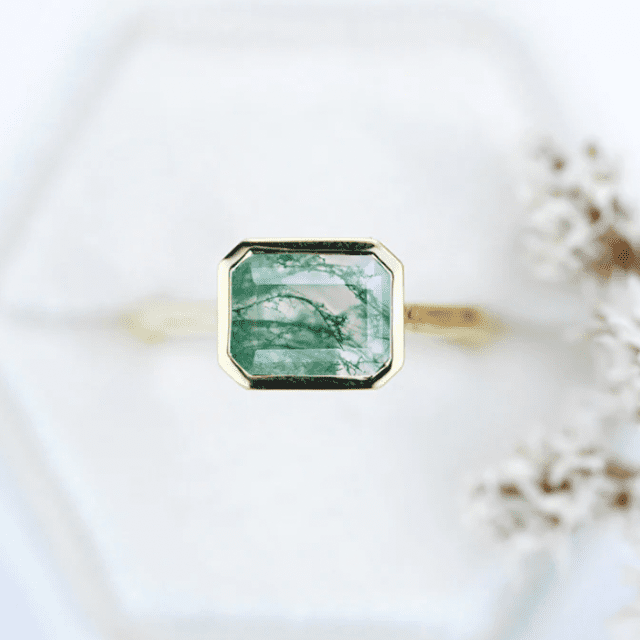 Not every engagement ring has to have a sparkle factor. This bezel-set option puts the moss agate stone on full display, for an emerald-cut style that is simple and sophisticated. 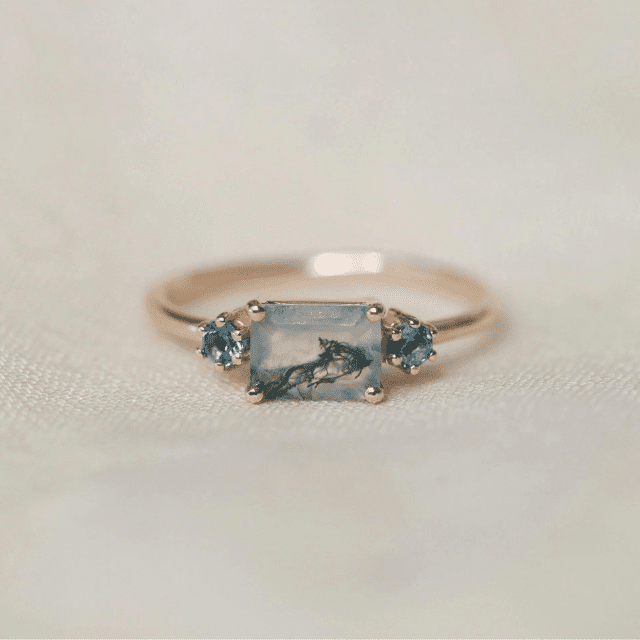 This minimalist three-stone ring has multiple pops of color for an artful design. The blue of the topaz brings out the green inclusions of the moss agate, which keeps the ring feeling modern and unique. 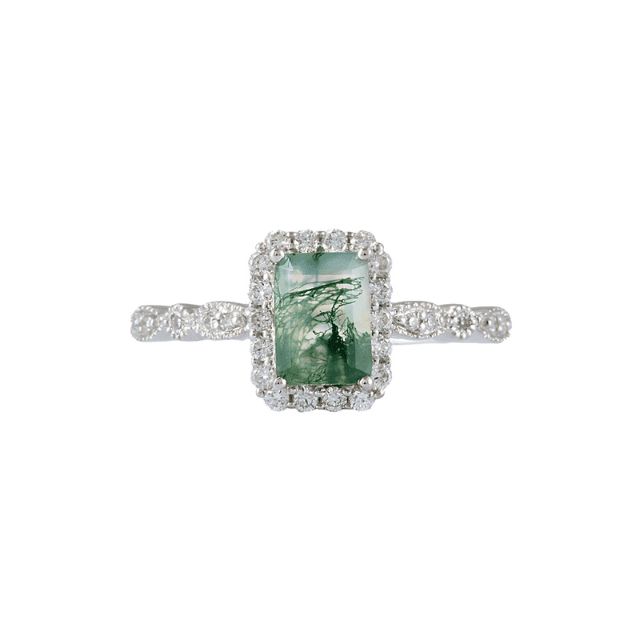 While moss agate is a modern choice, this emerald-cut ring has a classic feel to it. The center stone is framed by a halo of round-cut diamonds and sits on a scalloped band for the perfect elegant touch. 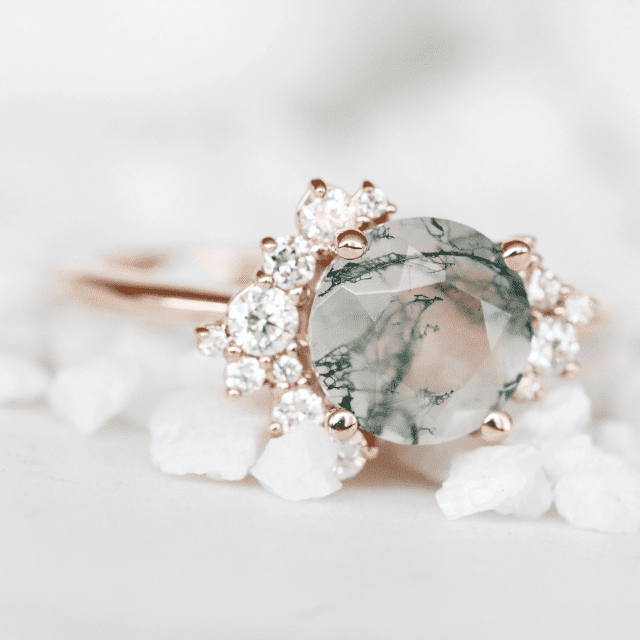 This ring brings a bit of sparkle to a simple cut. The round moss agate stone is accented by natural white diamonds and a four-prong setting that lets the gemstone take center stage. 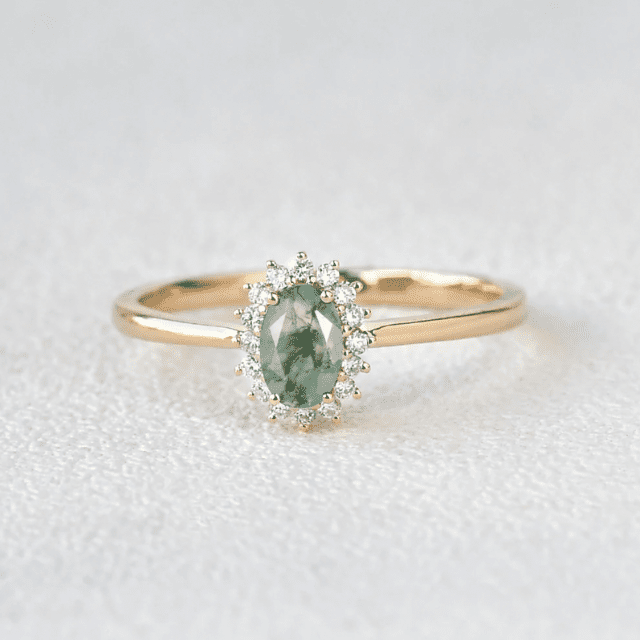 This statement ring effortlessly combines a unique setting with an alternative gemstone. The moissanite accents around the moss agate center stone create a floral design that is both whimsical and stylish.

The Bea Line Hera in the Garden Bridal Set 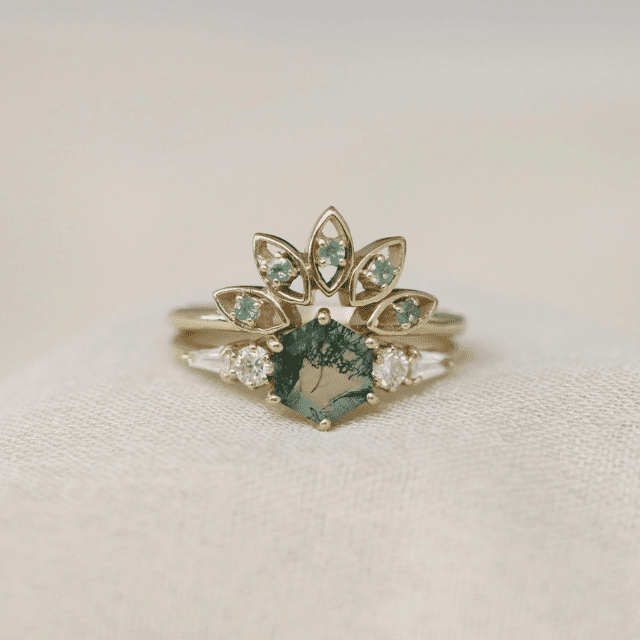 Why settle for one distinctive ring when you can have two! This bridal set features a hexagon-cut, moss agate ring with baguette diamond side stones, and a matching band of Alexandrites for a beautiful stacked look. 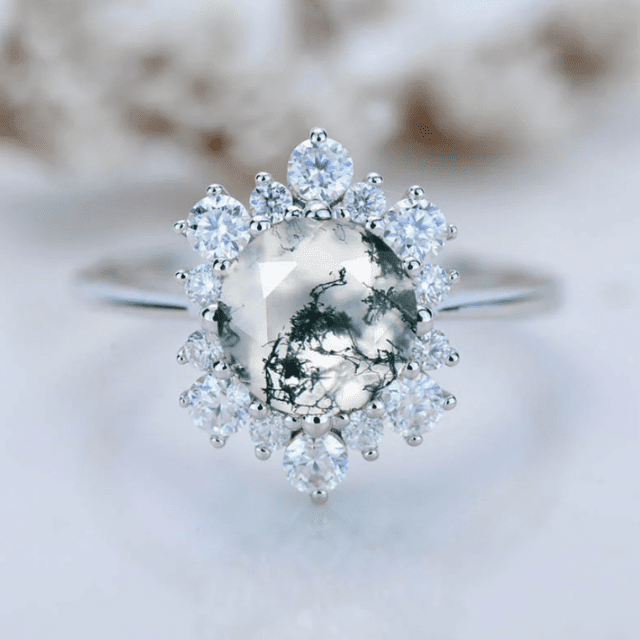 The snowflake design of this ring is fitting for a gemstone that resembles the mossy ground of a forest. We love the icy look of the side stones, and 14K white gold band, which makes it the perfect choice for a bride who loves the outdoors. 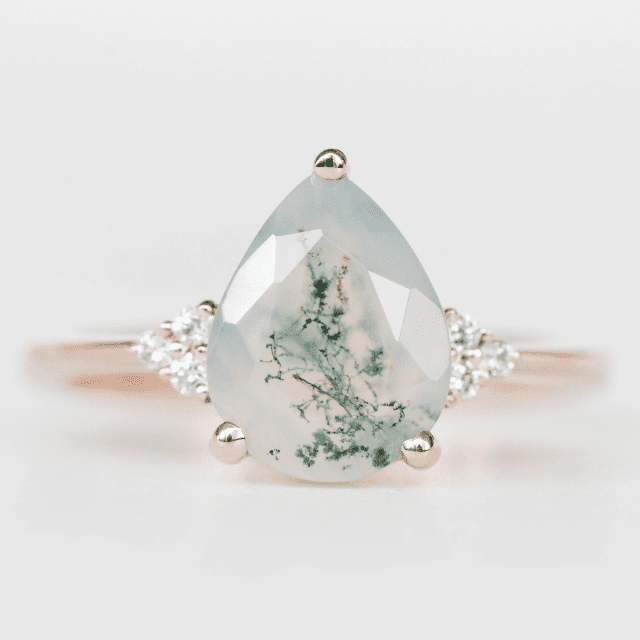 An elegant and timeless design, this pear-shaped ring with diamond accents has an effortless quality to it. It can be worn alone or stacked for a fashion-forward touch. 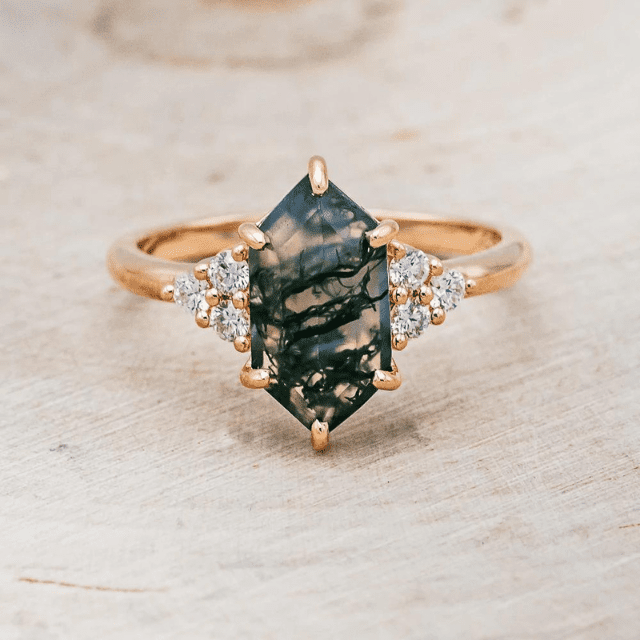 An uncommon cut, this hexagon-shaped ring has three diamond accents on each side for a setting that will stand out. It’s available in 14K white gold, yellow gold, or rose gold for a customizable look that is handmade to order. 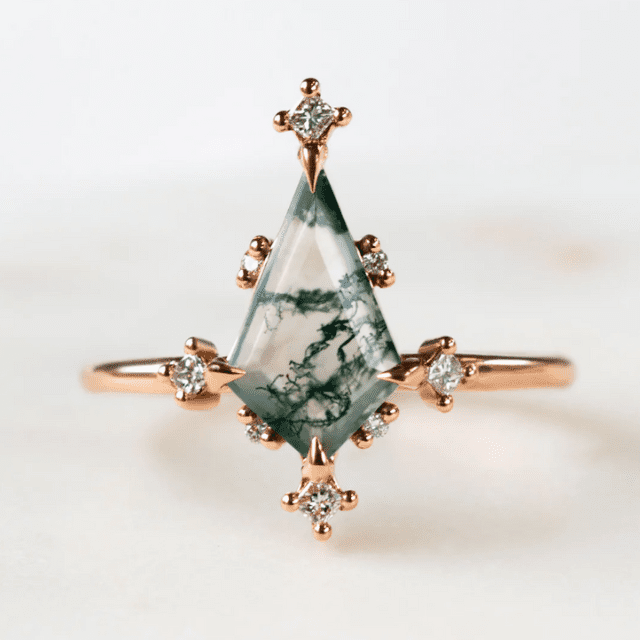 Make your engagement ring your very own north star with this intricately shaped design. The kite-cut center stone is covered on all sides by princess-cut diamonds that offer some glitz and glam to an otherwise minimalist ring. 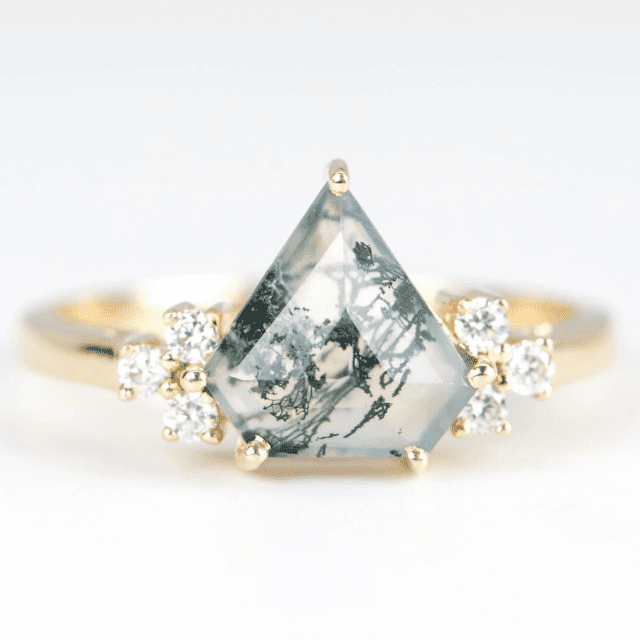 Similar to a pear-shaped cut, this shield shape gives you that pointed look with sharper edges. Featuring moissanite accents and a 14K yellow gold band, this ring is stunning in its simplicity. 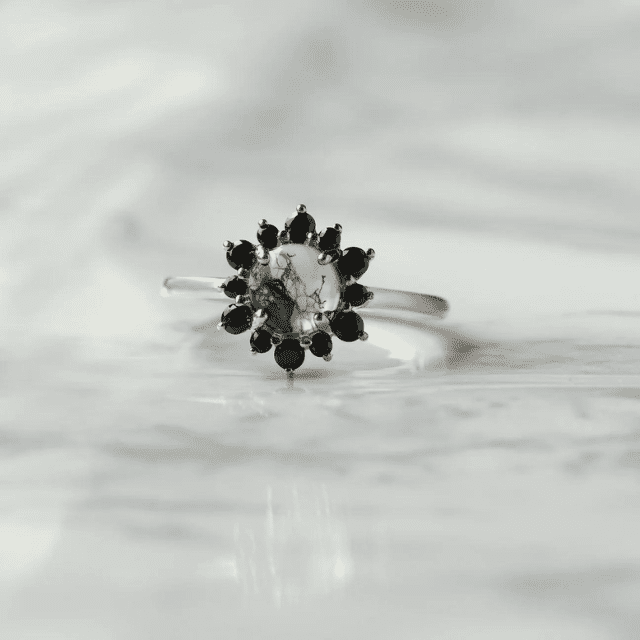 Amplify the unique appearance of your ring with this floral-shaped setting. The black spinel side stones perfectly compliment the dark green accents of the moss agate center stone for a playful engagement ring design. 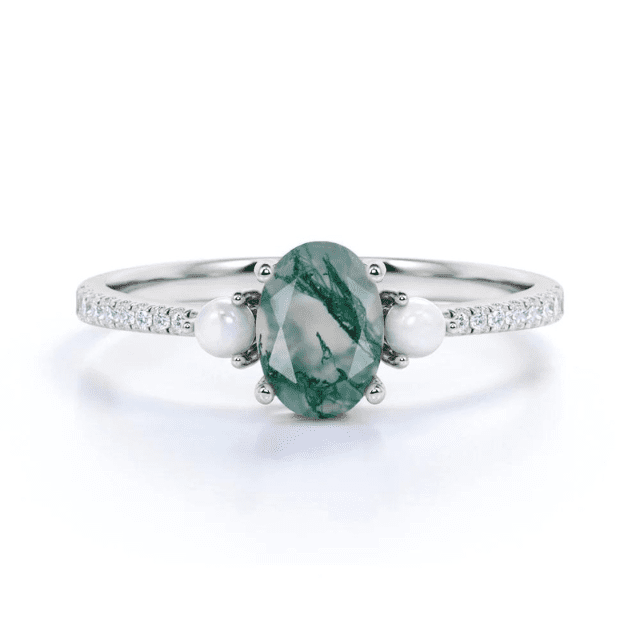 The unexpected combo you didn't know you needed for your engagement ring! This moss agate ring is accented by two pearls and a moissanite encrusted band for a gorgeously unique design that will surely stand out. 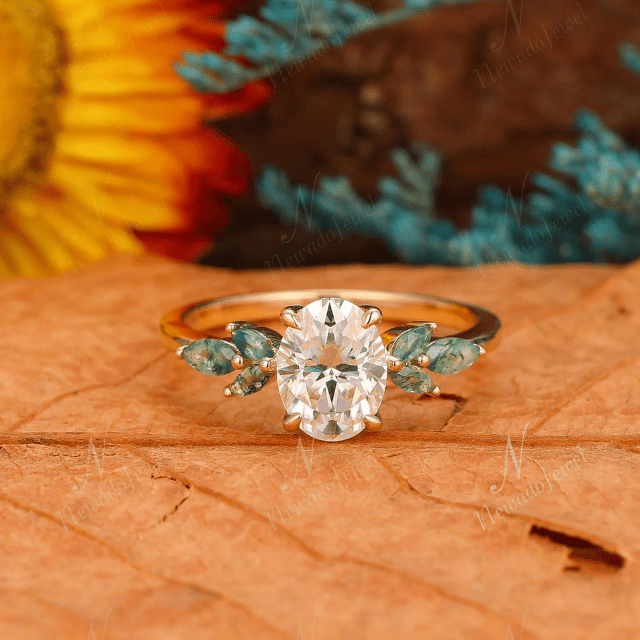 A pared-back take on a moss agate engagement ring, this one uses the gemstone as marquise-cut side stones. This ring also features an oval-cut moissanite stone and can be paired with a white gold, yellow gold, or rose gold band to fit your preference. 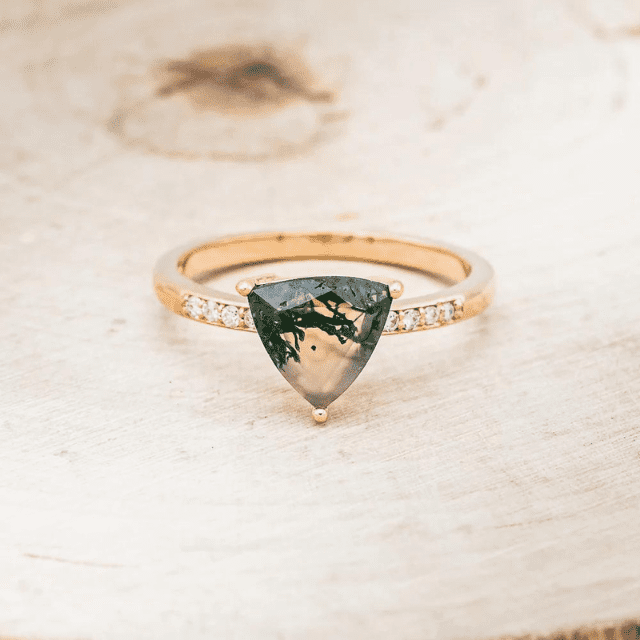 Sitting on a 14K rose gold band, the diamond accents beautifully offset the moss agate center stone. While this ring is only available in a size 7, it can be re-sized, two sizes up or down, to fit your needs. 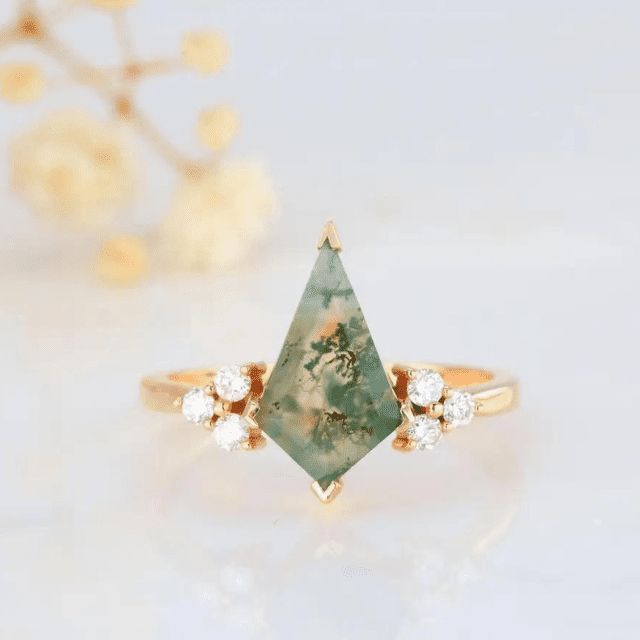 If you're a size 6.5 and searching for a kite-cut ring, you're in luck! This moss agate ring has round diamond accents and a rose-gold band for a modern design with a vintage twist. 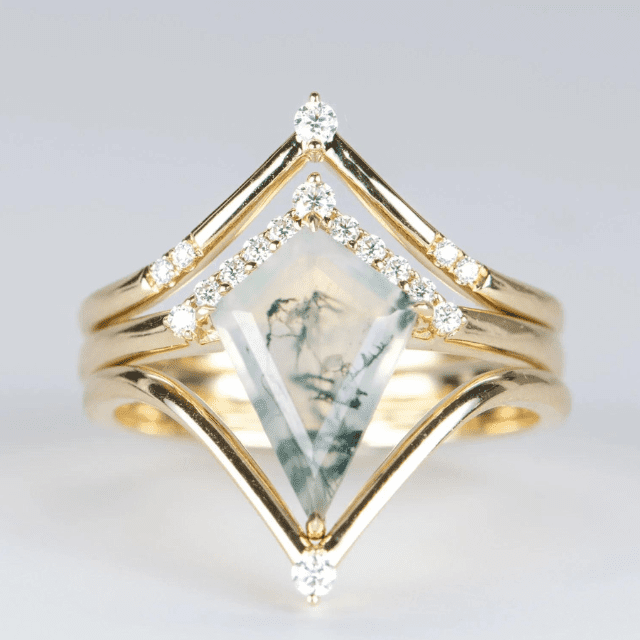 Do you consider yourself an avid fan of the stacked look? This design will give you that effect in just one ring! The kite-cut center stone is set on three linked 14K yellow gold bands with round-cut moissanite accents. 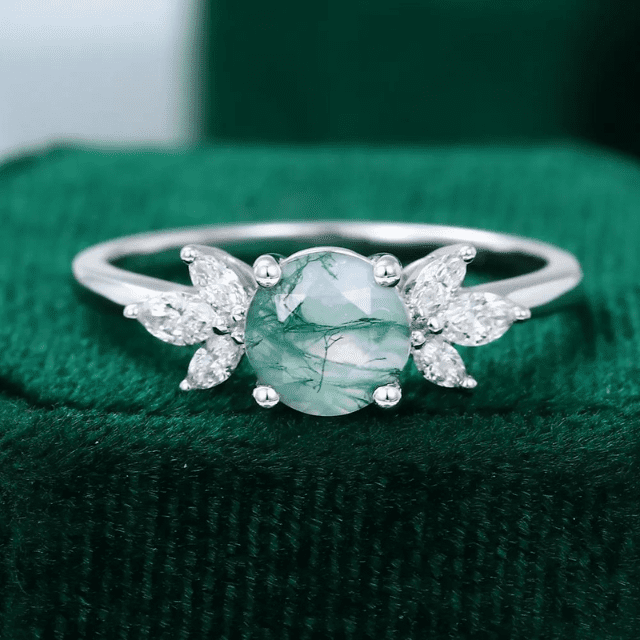 This delicate ring combines both round-cut and marquise-cut stones for an art-deco-inspired design. An affordable choice, you can choose between moissanite or diamonds for side stones that fit your budget. 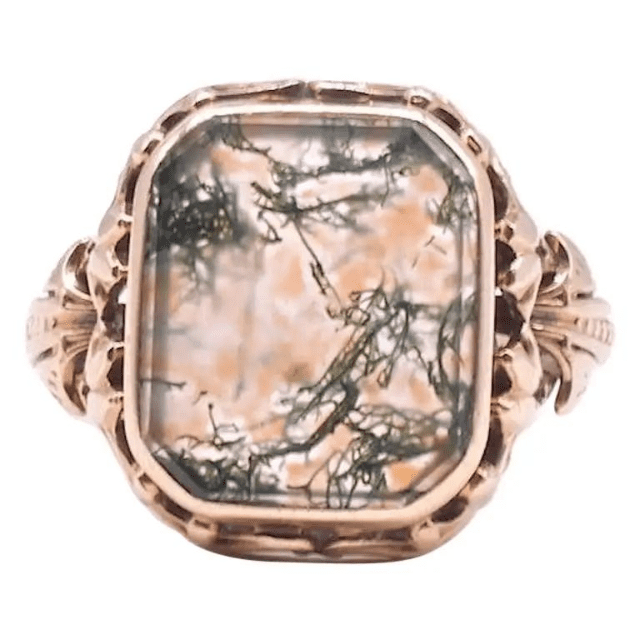 This gold-band signet ring is a family heirloom in the making. Whether you choose to wear it on your pinky as is custom or on your ring finger, the geometric-shaped moss agate stone is eye-catching and gives the design a vintage feel.