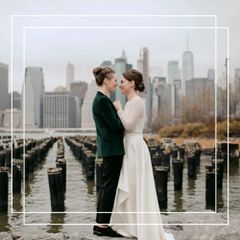 A Modern Winter Wedding at 501 Union in Brooklyn, New York

“Brooklyn is our home,” Lilla Goettler, a theater administrator, says of she and musician Katie Hathaway, who met in 2013 working on a play directed by a mutual friend. “When we started dating, Katie lived in Gowanus, and we’ve never lived far from there since," Lilla says.

After Katie proposed at the Wythe Hotel in Brooklyn’s Williamsburg neighborhood in December 2017, the couple, naturally, began looking for a wedding venue near their home. "We wanted to share Brooklyn with our family and friends," Lilla says. The other requirement? It needed to be large enough to accommodate 160 guests “but still have an intimate feel.”

Read on to see their winter wedding—with details that felt festive but "not Christmas-y"—at 501 Union take shape, as planned by Jason Mitchell Kahn and captured by Tonhya Kae Photography.

For Katie and Lilla, choosing their wedding day attire was one of the hardest decisions they made during the planning process. “We both put off shopping for a while because, at any queer wedding, it feels like you are really making a 'choice,'" Lilla admits. "But, ultimately, we were both super happy with our outfits.” On the big day, the couple got ready together along with their dog, Pearl.

Katie wore an ensemble from Suistudio. “I immediately knew the green velvet blazer was for me,” she says. “My mom also bought me amazing earrings from the Sundance Catalog and sweet velvet lace-up Oxfords from Bruno Magli.”

Lilla chose bridal separates from BHLDN. “I spent about a month trying the outfit on over and over again before I decided,” she admits. “I really wasn’t expecting to love a long-sleeved dress, but it ended up looking great and keeping me cozy.” She paired her dress with a pair of white sneakers. “The outfit didn’t feel completely right until I tried on the Converse," she says. "It was a great androgynous touch that made the whole outfit feel more ‘me.’”

The pair posed for photos before the ceremony, the Manhattan skyline rising in the background.

“We invited so many people to be part of our ‘wedding band,’ we didn’t want to dictate what folks wore,” says Lilla. “Because of the season, everyone stuck to a similar color palette anyway and also got to wear something they felt comfortable in. I love that you can see everyone’s own style and personality through their attire.”

Instead of bouquets, the couple provided everyone in the wedding party with boutonnieres and the couple wore corsages.

The couple hosted their ceremony and reception at 501 Union, an event space in Gowanus, Brooklyn. “We loved the Art Deco embellishments that made the space feel warm, even in winter,” says Lilla. The ultimate goal? “A cozy, elegant, Hogwarts-style feast," she adds.

For their ceremony, they had a "wedding gate," which was a rectangular frame with greenery and round glass planters hung with a rustic rope. "It complemented the existing greenery at 501 Union nicely," Lilla says. "The aisle was lined with floating candles in a variety of glassware.”

My two sisters walked on either side of me, and Katie and her sister, Emma, followed. We really wanted the bride in the suit to be the last instead of the white dress.

“Our parents opened the ceremony procession walking each other down the aisle. Then we each had our sisters walk down the aisle,” says Lilla. “My two sisters walked on either side of me, and Katie and her sister, Emma, followed. We really wanted the bride in the suit to be the last instead of the white dress.”

"While Katie and Emma were processing down the aisle, the wedding band inadvertently ended their song, leaving them in awkward silence for a few steps," Lilla adds. "Then, the keyboardist, our friend Benjamin, simply started the chorus over again to great applause. All of the guests cheered, breaking that usual pre-ceremony/procession tension. Sometimes little mistakes make for the most memorable moments of joy and spontaneity!"

We crafted the entire ceremony from start to finish. The structure was fairly traditional, but we wanted to remove any religious or gendered language or traditions.

“We crafted the entire ceremony from start to finish,” says Lilla. “The structure was fairly traditional, but we wanted to remove any religious or gendered language or traditions.” Their ceremony featured several poetry readings including Mary Oliver’s “Moments”, Emily Dickinson’s “I’m Nobody, who are you?” and “Having a Coke With You” by Frank O’Hara.

“We also crafted a mash-up of Virginia Woolf and Vita Sackville West’s love letters with our early text messages," Lilla says. "As a take on the Jewish tradition of the seven blessings, we had seven people in our wedding party share a 'wish' for us — kind of like a mini toast. Finally, we each read our own vows to one another, and the whole thing was framed beautifully by our officiant, our friend Joey.”

“After our vows, our wedding party sang ‘Such Great Heights’ in an arrangement that showcased every singer onstage,” says Katie. “Our officiant, Joey, had the opening solo, which made it all the sweeter!” The newlyweds recessed to “Hold It In” by Jukebox the Ghost, performed by a friend.

During cocktail hour, guests sipped on two signature cocktails inspired by the movie Carol. “'The Belivet,’ which was a whiskey drink with lemon, rosemary and bourbon maple syrup, and ‘The Price of Salt’ which was a pomegranate margarita, named after the book on which Carol is based,” says Lilla. Guests found their table numbers on a large mirror, which also served as a seating chart thanks to custom decals, and snapped photos to include along with messages in the couple’s guest book.

“We wanted a lot of green and red but we didn’t want to overwhelm the look with stereotypical Christmas flowers and décor,” says Lilla. “The tables were lined with lots of green and red flowers accompanied by succulents and other small glassware filled with tiny little fairy lights and candles.”

In addition to a seated dinner, the couple also hired a portable pizza oven from Brooklyn institution, Roberta’s. “They turned out amazing pizzas all through dinner,” says Lilla. In lieu of a wedding cake, they served Ample Hills ice cream and Dun-Well doughnuts.

“We decided not to do a first dance or parent dances because it just didn’t feel like us,” says Lilla. Katie did have one surprise up her sleeve, though. “After dinner, she surprised me with an original tune that she sang and accompanied herself on the keyboard," Lilla says. "I usually guess surprises, but this one really worked!”

Following the wedding, the couple spent a long weekend relaxing at 1 Hotel Brooklyn Bridge, where they took in the view from the borough they love and reflecting on their day. “A lot of little details you may agonize over in the planning stages won’t actually matter on the day,” Lilla offers. “If you love the major elements, you won’t care about the charger plate or that extra kind of canapé.”

Seating Chart: I Do Event Decals