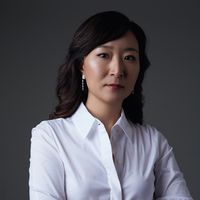 Reviewed by Sandy Ip
Sandy Ip is a GIA accredited Graduate Gemologist and a holder of the GIA Jewelry Design Certificate.
Brides's Editorial Guidelines
GIA Accredited Gemologist
We independently research, test, review, and recommend the best products—learn more about our process. If you buy something through our links, we may earn a commission.

When you think of a wedding band, the typical metals of gold, silver, and platinum probably come to mind. But what if you want something unique and different? Meteorite might just be the wedding band material for you.

Meteorite is a piece of a comet, asteroid, or meteoroid that passes through the atmosphere and reaches the surface of a planet or the moon. Experts estimate that meteorite material travels at an estimated speed of seven miles per second.

Nothing formed on Earth is quite like meteorite. The material's striated design, known as a Widmanstätten pattern (figures of long nickel-iron crystals), is formed by bands of alloys called kamacite (nickel-iron found in meteorites) and taenite (a mineral found naturally on Earth, mostly in iron meteorites).

According to jeweler Ryan Atlas, what makes meteorite rings so special are their natural patterns, which are the result of nickel-iron crystals growing as the heated meteorite cools very slowly over millions of years. The resulting crystalline pattern is very distinct and unique. Jeweler Johan Rust compares a meteorite ring to a snowflake: no two are the same. “Meteorite is such a perfect material to incorporate into a ring to make it something extraordinary. After all, finding the perfect partner is a pretty astronomical feat!”

Ahead, Atlas and Rust explain everything to know about meteorite wedding bands.

Pros and Cons of Meteorite Rings

Considering that the material is rarer than platinum, meteorite jewelry has a surprisingly modest price tag. Rust says, “Pricing runs the gamut depending on the ring metal, amount of meteorite, and other materials in a design.” For a thinner, single inlay meteorite ring crafted in an alternative metal, you can expect to pay about $400. Precious metal meteorite rings are closer to $1,000.

As for durability, Atlas says considering meteorite rings are originally derived from an extinct planet’s core, several billions of years ago, the jewelry is extremely strong and resistant. Rust agrees, saying, "Meteorite is made up of metal elements, primarily metallic iron-nickel, making it very hard and durable on its own. When inlaid into a ring crafted in tungsten, titanium, or another hard metal, it makes for a ring that can withstand the tests of time.”

A con, however, is that meteorite is prone to oxidization because it contains a high amount of iron. “As part of Brilliant Earth’s production standards, we apply a protective layer over the meteorite material in order to safeguard it from moisture," ensures Atlas.

What to Look for in a Meteorite Ring

Here are a few questions and answers you should know before choosing a meteorite ring.

How to Care for a Meteorite Ring

"Meteorite material isn’t something to wear unmindfully," cautions Rust. However, rusting can be prevented by protecting your ring with wax or oil, avoiding submerging it in water, and periodically using rubbing alcohol to clean and dry out your ring.

He also advises using a toothbrush and some regular toothpaste to remove any rust or grime. Next, soak your ring in some rubbing alcohol to dry out any moisture. Finally, seal the meteorite with some oil to protect it from rusting in the future.

Ready to slip something one-of-a-kind on that finger? Read on for the best meteorite wedding bands. 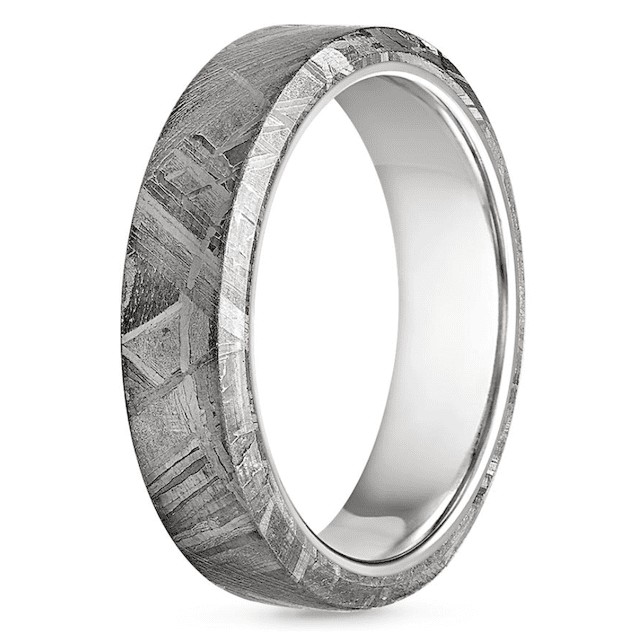 A distinguished band with a contemporary look, this mixed metal ring features a meteorite exterior, balanced with beveled edges and a polished tungsten interior. 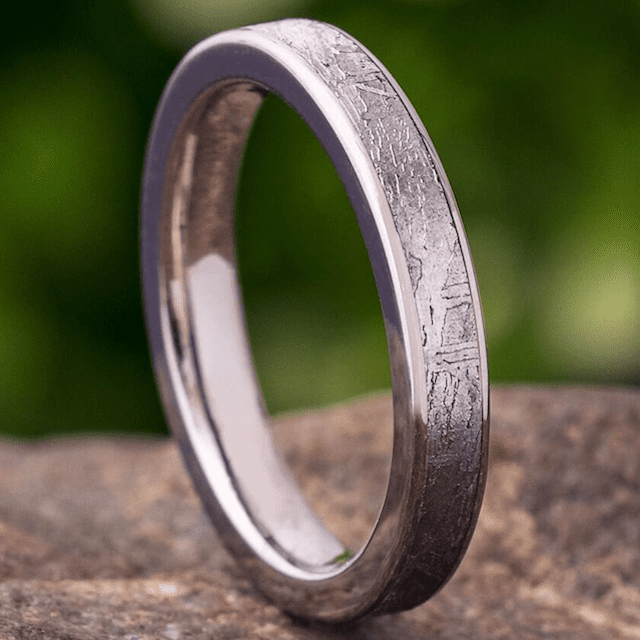 Courtesy of Jewelry by Johan

The thin titanium band showcases a gorgeous, genuine Gibeon meteorite inlay that has been etched to reveal characteristic patterns and Widmanstätten figures. 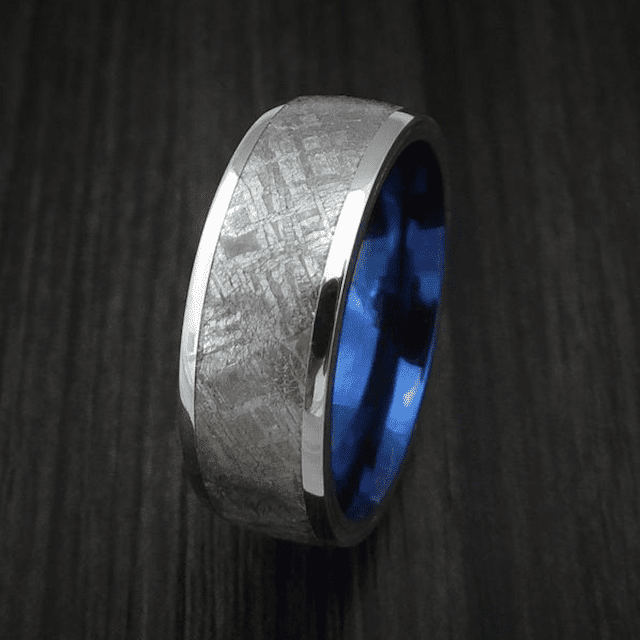 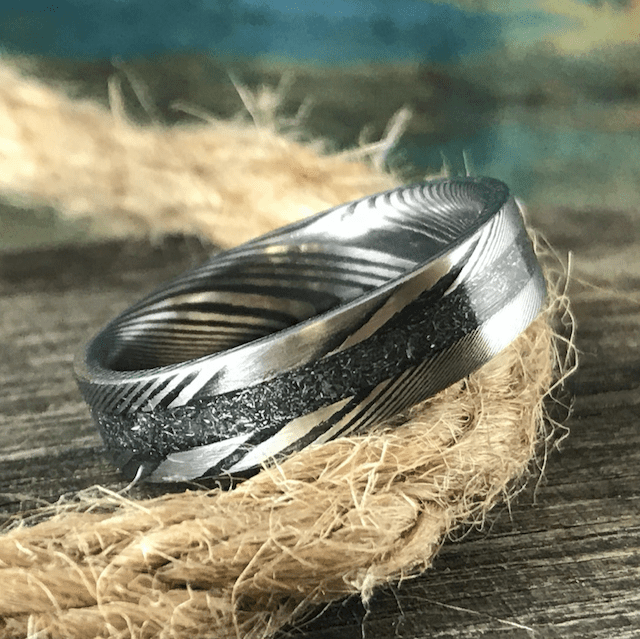 This stainless Damascus steel and meteorite ring has zebra-like lines that wrap around the band. The black and steel colors create a striking contrast. 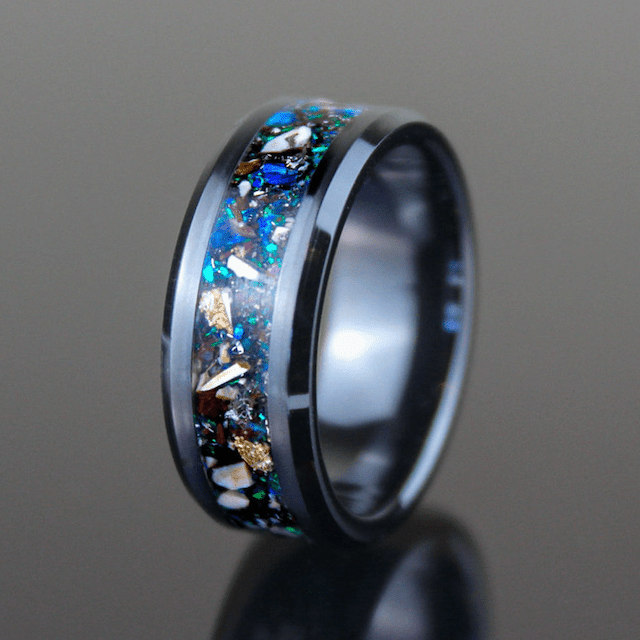 This ring is handmade with each piece of meteorite precisely placed to stand out. It also boasts both meteorite and dinosaur bone, while opal gemstones create a stained-glass effect on the black band.

Price at time of publish: starting at $145 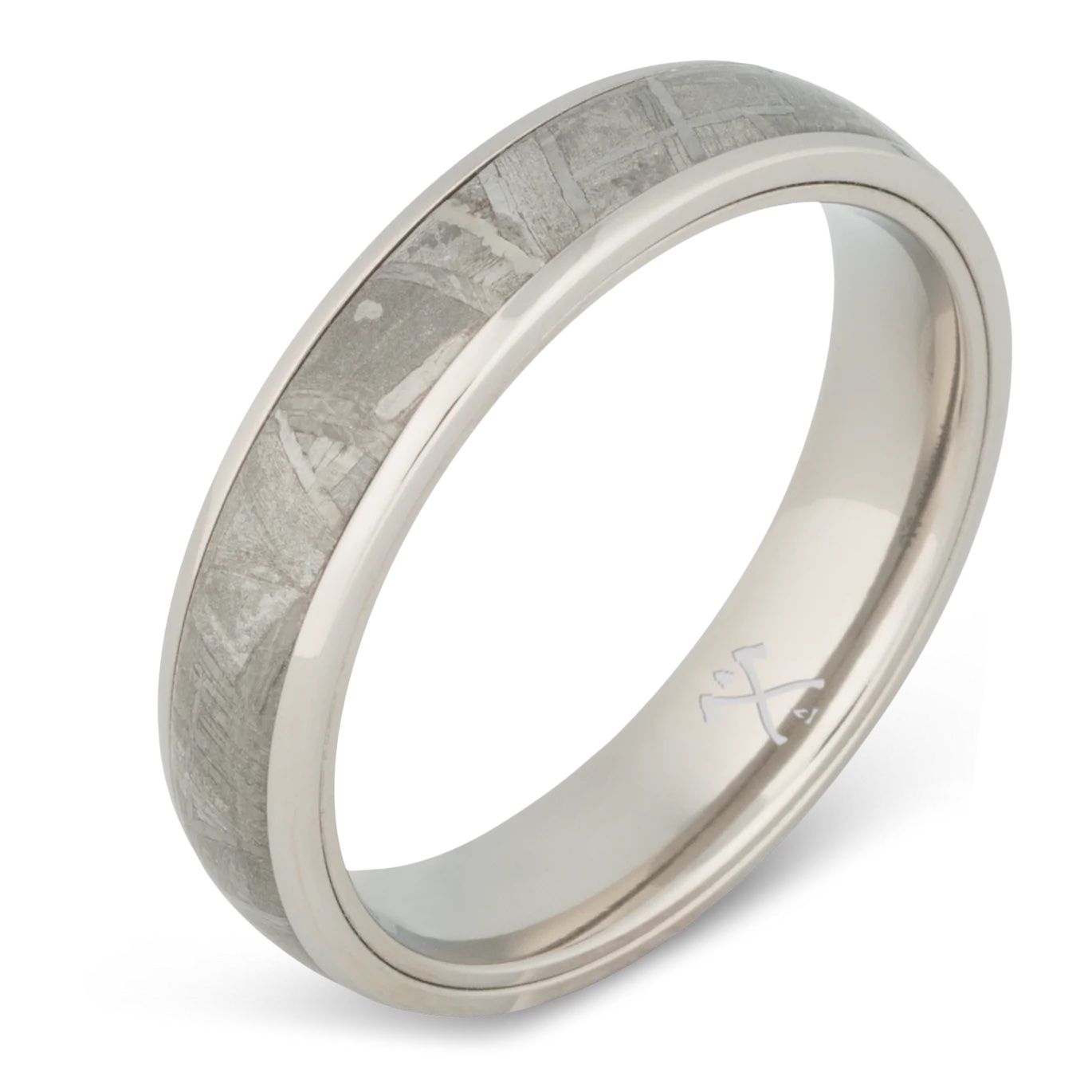 This stunning ring is truly out of this world. This features a titanium band with a meteorite inlay that creates an eye-catching finish. Plus, this ring offers a domed design for a comfortable fit. 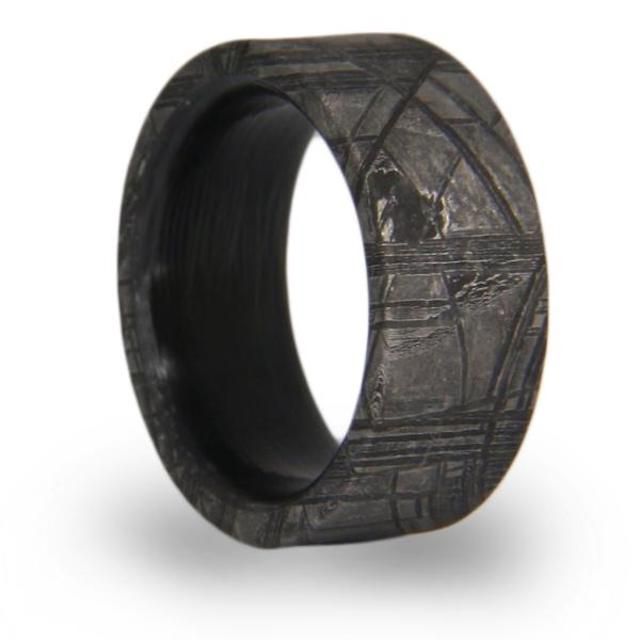 Crafted from authentic Muonionalusta meteorite slabs, this band can be customized for width, profile, and liner. The natural properties of meteorites showcase a one-of-a-kind geometric pattern. 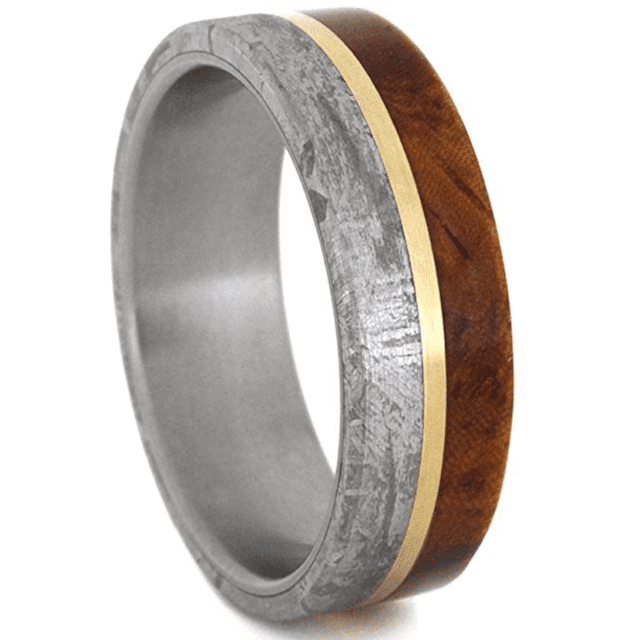 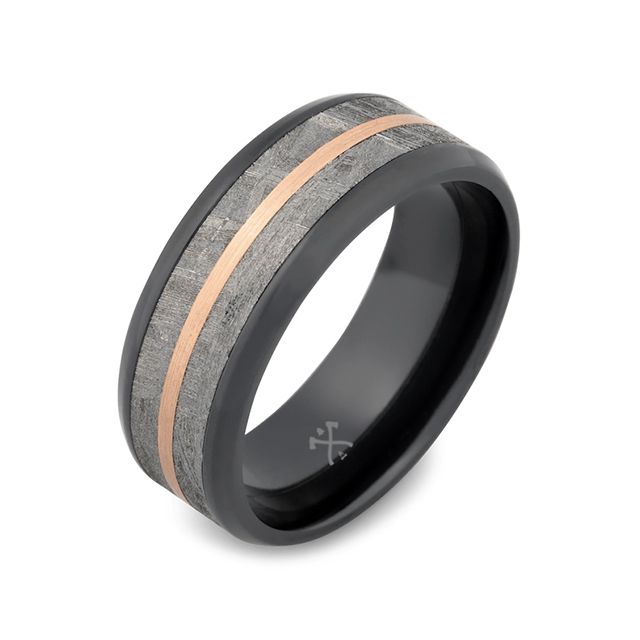 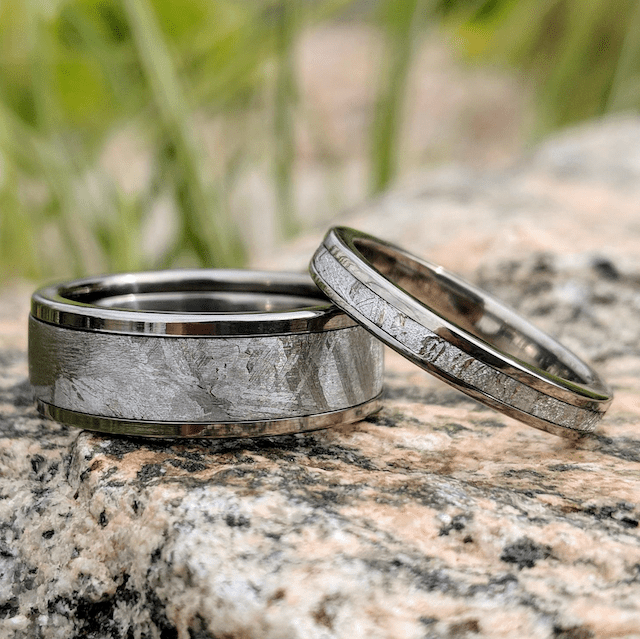 This stunning Gibeon meteorite band set is crafted with titanium sleeves. Each ring is acid-etched to bring out the brilliant Widmanstätten lines. 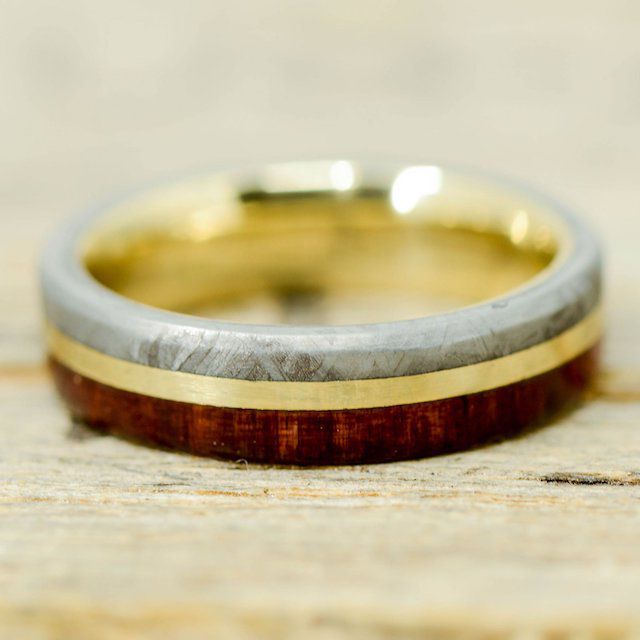 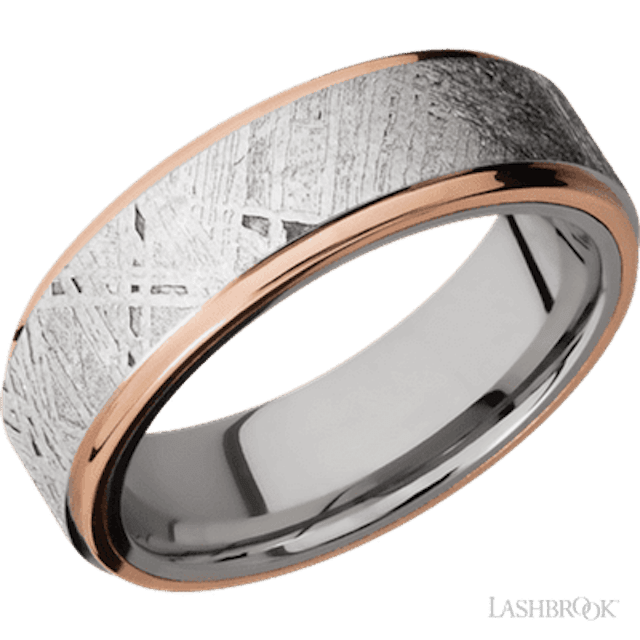 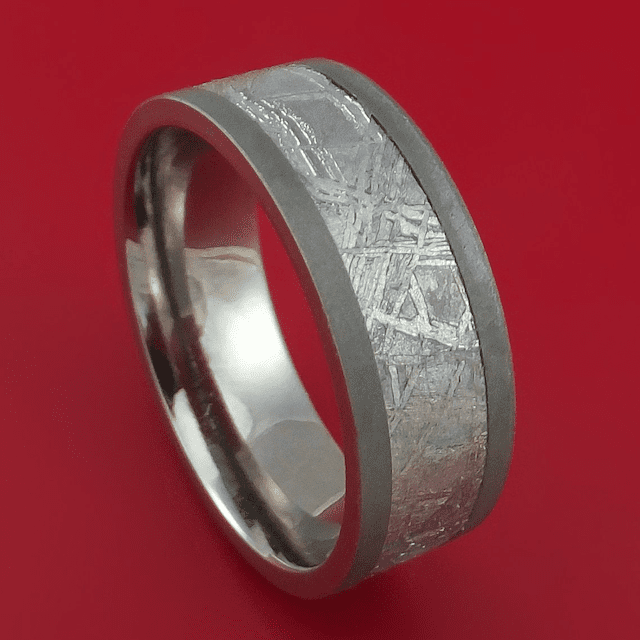 This Gibeon meteorite and alloy titanium band features a distinct crystalline structure on its surface. Flat in shape, it has a cool, sandblast finish. 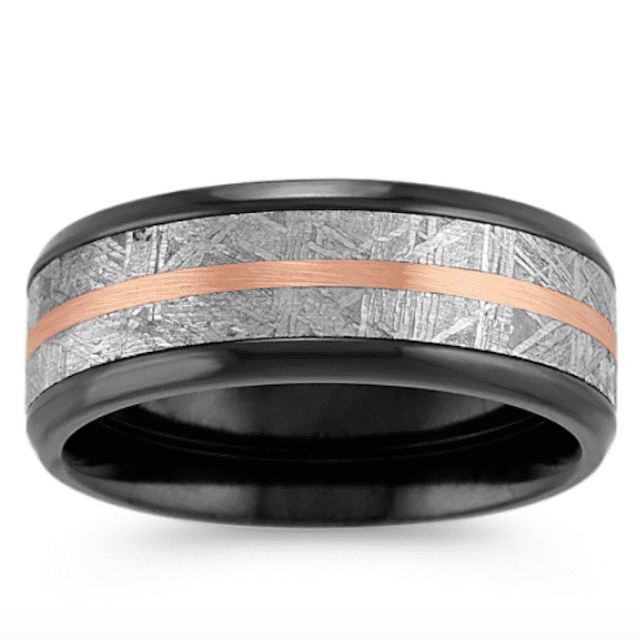 Meteorite and black zirconium come together to create a modern and unique wedding ring. A thin band of 14K rose gold wraps around its center for elegant appeal. 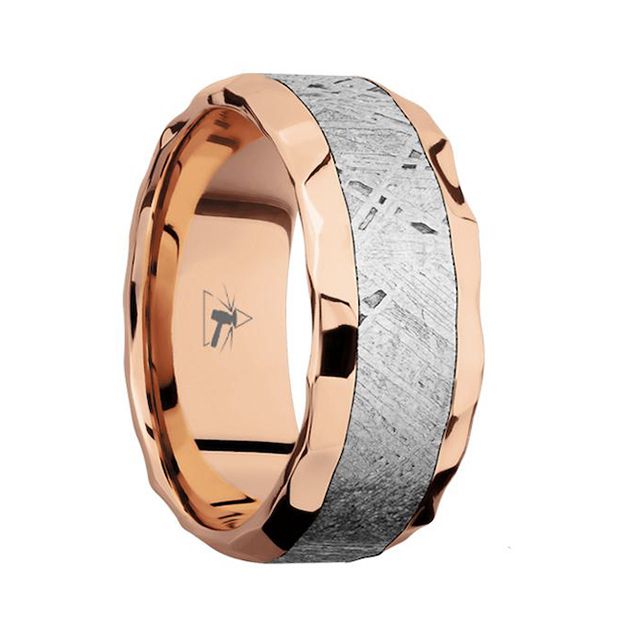 Crafted with 14K rose gold, a meteorite inlay, and hammered, beveled edges, this ring has a rugged charm. Just remember—this one is made-to-order!

Brides contributor Christine Coppa has been a lifestyle journalist for 17 years. Her book, "Rattled!," was named a Target Breakout Book and reviewed by The New York Times. Her work has been published in a variety of publications including Byrdie, Verywell, Glamour, and Cosmopolitan.