Real Stories
In this section
CLOSE
The Ultimate Guide to Elopements 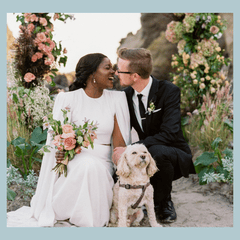 A Wedding Photographer's Stunning Elopement on the California Coast

When Micah Paul, an engineer, proposed to Matoli Keely, a photographer and scientist, he did so with the help of their dog, Zoe, as they were unpacking boxes in their new San Diego apartment in August 2019.

"Micah made breakfast and suggested that we open up the last moving box and celebrate with champagne, which I resisted because we had plans to clean out my old apartment that day," Matoli recalls. "He insisted, and I opened the box to find a dog chew-toy shaped like an engagement ring with a special note to my dog Zoe asking her to be his 'forever dog.' I gave the toy to Zoe, sarcastically pointing out to her that Micah got her a ring before me. As I turned around, he was already down on one knee and asked me to marry him.  It was a tear-filled resounding yes!"

On January 19, 2021, Zoe played another important role on Matoli and Micah's wedding day: ring bearer! The couple had originally dreamed of hosting a multi-day, multicultural wedding in San Diego. However, thanks to the pandemic, they ended up eloping up the coast in Big Sur, California. "Micah and I love the California coast! Big Sur is just one of those places that takes your breath away," she says. "We knew that if we could not have a traditional wedding with our families and friends present, we would rather be at a location that we both love."

Keep reading to see Micah and Matoli's breathtaking elopement come to life, thanks to the bride's friends and fellow wedding pros, including photographer Erich McVey.

"Planning an elopement for two in the middle of the pandemic was definitely a surreal experience," admits the couple. When it became apparent that their initial vision for a "week-long celebration with family and friends in San Diego" wouldn't be possible for the "foreseeable future," Matoli and Micha reimagined their plans for two but still made sure to include their loved ones.

"Since this was just going to be a wedding for two, we wanted to make sure we kept things focused on what was most important," explains the bride. The first item on the agenda? Making sure their families were involved. In order to "feel their presence during the day," the couple's parents wrote them letters that they read together before the ceremony;  Matoli Zoom'ed with her immediate family so they were able to see her in her gown; and Micah’s brother and sister-in-law wrote him a card, which he carried in his pocket throughout the day. And, of course, Zoe acted as ring bearer!

Their parents' letters were beautifully transcribed by Amanda Reid Designs, so the couple could save them as a wedding keepsake.

Being that Matoli is in the wedding industry, the couple prioritized using vendors that were important to them. "Our photographer, Erich, is a good friend of Matoli’s, the officiant Carmen, a fellow photographer is one of Matoli’s best friends, and Stacey, the makeup artist, and the florists, Angie and Emily, are also close friends and frequent collaborators," Micah says.

Using black-owned female businesses was incredibly important to Matoli. There were two beautiful cakes by Nicole Bakes Cakes, an exquisite hair comb by Julie Harris Designs, calligraphy by Amanda Reid Designs, and her favorite fragrance by MAIR fragrance, shown above.

On the big day, Micah went with a slim-fitted black suit from The Black Tux. "He kept things very classic," says his bride.

Micah gave Matoli a keepsake handkerchief engraved with their wedding date, while Matoli gave Micah a compass as an ode to his love for navigation. "Honestly, he was more thrilled about the custom case it came in since it had a tortoise (his favorite animal) snacking on a strawberry—an inside joke!" Matoli admits with a laugh.

That was the moment it really hit me that I was getting married, and standing there, in a mask, without my mom, sister, and friends, it was emotionally overwhelming.

Matoli found her epic bridal gown at Loho Bride "after a full day of dress shopping" in L.A. with a former bride-turned-best friend and bridal stylist, Leigh Penney of And Something You. "The moment I put on this Alex Perry 'Victoria' gown, I instantly knew it was the one," she recalls. "I got very quiet as I stood there looking at myself in the mirror because that was the moment it really hit me that I was getting married, and standing there, in a mask, without my mom, sister, and friends, it was emotionally overwhelming."

While she admits that hopping for a wedding dress in the middle of a pandemic had her "feeling very nervous," Matoli says she was extremely impressed with how each bridal shop took the proper safety precautions and made the experience still meaningful and enjoyable, especially Loho Bride, who was offering private appointments. After she said "yes" to the dress, they had it rushed-shipped from designer Alex Perry, who is based in Australia. "Every other dress I tried on during the day was compared to this one and nothing measured up," she says.

"After I found the dress, it was easy to bring the other pieces together," Matoli says. "I found the perfect metallic gold belt online and it was the perfect finishing touch to my gown." She complemented the modern gown with her custom engagement ring, a pear-shaped blue sapphire accented with diamonds, by Marrow Fine; earrings that were a "modern take on teardrops" by Vanessa Mooney; and, lastly, what she calls "the most incredibly designed hair comb" by Julie Harris, which featured intricate gold floral details and subtle pearl accents.

While Matoli went with a smaller bouquet for the ceremony, she couldn't help but pose for some bridal portraits with a stunning, statement bouquet from herr friends at Bloom Babes.

Thanks to the California stay-at-home order, Matoli and Micah didn't have a traditional wedding reception, but they kept to one tradition: Cutting the wedding cake! Nicole of Nicole Bakes Cakes created not one but two beautiful five-inch cakes—one red velvet, and the other carrot cake—for them, and both were decorated with more stunning florals.

Although this was far from our initial plan for a wedding, it was an incredibly special and emotional day,

"Although this was far from our initial plan for a wedding, it was an incredibly special and emotional day," Matoli says.

The couple got ready at an Airbnb in Carmel Valley, California, but headed to Pfeiffer Beach in Big Sur for the ceremony. "We nearly moved the wedding date because of the pandemic, but that wasn’t the only near-miss," adds the bride. "Two weeks after our wedding, a section of Highway 1 collapsed into the ocean during a heavy rainstorm, and the road to our ceremony location was closed. We were so fortunate that everything came together as smoothly as it did!"

This wasn’t the wedding we imagined before the pandemic, but instead of lamenting what we couldn’t have, we celebrated what we did have

As a wedding pro, Matoli has plenty of wisdom for couples planning, and she has even more now that she's been a pandemic bride, too. Her advice? "Grasp the truly important things and don’t hold onto the rest too tightly," she says. "This wasn’t the wedding we imagined before the pandemic, but instead of lamenting what we couldn’t have, we celebrated what we did have."

"We were reunited with Zoe at the beach right before the ceremony and she was thrilled to see us—once she recognized us in our strange get-ups!" Matoli says with a laugh. "She jumped on our legs when we brought the ring boxes out, hoping for a treat; she sprinted around the beach wondering why we weren’t playing fetch with her ball; she looked anywhere but the camera during photos; and she generally acted like the self-important diva that we know and love. "

"Knowing that everything we planned and made a decision about did not include our families and friends was the hardest part of planning," admits the couple. "There was a constant reminder of what we knew we could never have in our wedding due to the pandemic, coupled with the excitement of exchanging vows, committing to each other, and beginning our marriage."

As a kid, Matoli says she always dreamt of a garden wedding after watching one of her favorite childhood movies, The Secret Garden. "I knew that when it was time, I would have a lavish floral-filled wedding," she adds. This dream had to be modified when the traditional wedding became an elopement but Matoli still held on to having elements of this dream. "My modified vision was a modern, organic, garden elopement, focusing on keeping things simple, sentimental, and natural; nothing forced or contrived, yet representative of what is important to both of us," she says.

This translated to a big, beautiful floral arch by Bloom Babes. "I gave them creative freedom to create something organic that fit into the scene of the cliffs and beach," she explains. "The resulting arch could not have been more perfect—with lots of green planted directly into the sand and a mix of blush and purple florals!"

Both Matoli and Micah walked down the aisle to “I Will Follow You Into the Dark” by Death Cab for Cutie—played on a Bluetooth speaker! "This song is significant to us because we attended their concert early on in our relationship and, during the performance of this song, Micah sang it in my ear," she recalls. "It was the moment I fell in love with him."

The couple wrote personal vows to each other and read them for the first time to each other during the ceremony. "We realized later just how similar our vows were," Matoli says. "They even had similar jokes and anecdotes! I promised to try and keep the microwave clean, while Micah promised to be patient, even when I make a mess of the microwave."

The newlyweds, who first met on Hinge in 2018, and got engaged with their dog while toasting with champagne, celebrated their nuptials in much the same fashion, adding that they hope to honeymoon "on a little island somewhere" in the not-too-distant future.

Looking back on planning, the couple says planning a wedding for two was definitely the easiest part. "No save the dates or invitations, seating arrangements, etc! We were able to focus on the most important elements of the day," Matoli adds.

For their first dance, the newlyweds danced on the beach right at sunset, playing “When I Get My Hands on You” by The New Basement Tapes—again, on speaker.

It was the perfect end to our day and we would never have this memory if it was a traditional wedding.

"We had looked into hiring a private chef or going to a restaurant for dinner post-ceremony, but with the stay-at-home order, we ended up having some leftover greek food and champagne to celebrate," says Matoli. "It was the perfect end to our day and we would never have this memory if it was a traditional wedding."

Bridal Stylist And Something You