Love Looks Like This: We're Partners in Business and Love

"She quickly became my best friend and the person I love to do everything with." 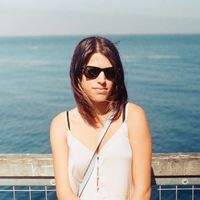 Sydney Fogel
Sydney is an experienced lifestyle writer who has written about everything from celebrities and pop culture, to weddings and astrology, with her work appearing in a range of publications.
Brides's Editorial Guidelines

Brides is committed to guiding ALL couples through not only their wedding planning journey, but through relationship milestones and ups and downs. Every love story is beautiful, has its own distinct history, and its own trials—there's no relationship that looks the same. To celebrate that uniqueness, we're asking couples to open up about their love story, for our latest column, "Love Looks Like This." Below, Bev founder Alix Peabody and Geoff Miles tell their love story.

Geoff: We met in Salt Lake City, Utah in baggage claim. I was living in New York at the time and Alix was in L.A. We were both separately going on ski trips for the weekend. I missed my flight the night before and had to take one at 5 a.m. the next morning. Alix’s flight happened to get delayed, so we ended up landing in SLC at the same time. We met at baggage claim, struck up conversation, realized we were going to the same place, and then shared an Uber up to the mountain.

We basically started dating that weekend. But, in the Uber up to the mountain, it was actually pretty annoying—mostly because I was sleep deprived—but also because she just immediately hopped on a conference call for the entire 45 minute ride. It turns out she was on the phone with Bev’s lawyer getting the first licenses.

When we got to the mountain, she gave me her phone number, and we hung out the whole weekend. I was going up there to hang out with some guy friends I hadn’t seen in a long time, but I just saw them for a few hours and spent most of the time with Alix.

Alix: I love the fact that it was the first flight he’s ever missed in his whole life. It’s not a normal thing for him. Mine was four hours delayed, and we probably would not have met otherwise.

6 Sweet How We Met Stories From Real Couples

Alix: I had already started the company at that point but was still fundraising. I was going to be in New York the following week and Geoff asked if he could take me on a date. I said sure, and I looped him in with my assistant to schedule it, which is just completely absurd. It was a joke—I was just kind of messing with him.

I went to New York and I basically stayed with him for the entire 10 days. Geoff had a marketing agency and I was running Bev out in LA. We did long distance for about a year before he moved to L.A. We moved in together and got engaged pretty much right after that!

Geoff: We work really well together. Originally, I was very separation of church and state. I didn’t really ever want to work with a significant other—I thought it was a horrible idea. Then, Alix asked me to help on Bev’s marketing team for a couple months, and a couple months turned into six months, which turned into two years. But, we work super well together.

If you can figure out as a couple how to make time for yourselves outside of work, and get past the first few speed bumps, then it’s amazing, You know that person better than anyone else and they know you better than anyone else, so you can just kind of skip the bullshit and jump right into it. I never thought I would work with a significant other, but I’ve changed my mind about that. It’s amazing.

Alix: It’s the most fun; we have a really great time with it. It definitely makes the ups and downs of startup life more fun.

Alix: Our wedding was at my aunt and uncle’s house on Nantucket. We had it in their backyard, which was great. Because of Bev, we have a bunch of vendors who got really excited to pitch in. We got flip flops with a little logo that my creative director, who is also my cousin, made. And sweatshirts. For the after party, we had a silent disco which was DJ'd by our friend.

Geoff: We had just about the entire Bev team come to the wedding, and investors too. It was a great celebration. Though Alix started the business before we met, we started dating fairly shortly after, so these people have known and supported us through the entire creation and growth of Bev.

The Ultimate Wedding-Planning Checklist and Timeline

A Partnership in Life and Love

Geoff: One of the reasons Alix and I have such a strong relationship is because we have complementary strengths. We’re polar opposites in terms of the things we’re great at, but we compliment each other so well both in work and life. Before I met Alix, I had never experienced that kind of partner—the feeling of support for my weaknesses and also helping identify those weaknesses, and vice versa. That kind of complimentary support, both in life and work, is incredible. For the most part, you don’t get that really from anyone. She quickly became my best friend and the person I love to do everything with.

Alix: People always say when you know you know, and it’s ridiculous and you wish people would just stop saying it to you. I was not looking for a relationship at the time, Geoff was not looking for a relationship at the time, and when we first met, there was almost this feeling of already knowing each other. I say to him all the time, that it wasn’t like, “Oh it’s nice to meet you,” it was, “Oh, there you are.” I already recognized him in many ways. So I guess it had always been there but I just hadn’t met him yet. Little did I know, he was going to be my last first kiss of all time.

Alix: Geoff always reminds me that we grow together. So, we’re just excited to grow together, and meet each other in different times of life—and be there to support each other along the way.

Geoff: I feel the same way. I would add that running Bev has been a lot for both of us and for our relationship—it’s no easy feat. What Alix has done is incredible in terms of the determination and hard work that has gone into Bev. It’s been the most challenging but rewarding four years of my life. We’re looking forward to that journey as Bev continues expanding, and what that means in our personal lives. When I came in there were two or three people at Bev, and now we have 20 people in this amazing office. It’s that progression, and our progression as a couple, and just imagining where it’s going, that’s exciting for the future. It’ll bring more challenges, but also be incredibly rewarding.

Love Looks Like This: A Novelist Shares Her Real-Life Happy Ending