From the Mini Dress to the Mani, 12 Ways To Recreate Lily Allen's Chic Vegas Wedding Look

The only missing accessory is In-N-Out. 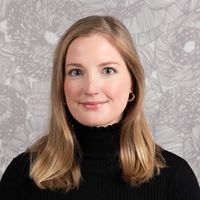 Sophie Moore is a former Brides editor and current contributing writer. With over five years of experience in bridal, she is an expert on all things fashion.

For her secret nuptials, Allen stunned in a gorgeous Dior mini dress complete with a bateau neckline (visions of Meghan Markle, anyone?), front buttons and a skinny leather belt. She ultimately made the little white dress bridal by sporting a voluminous two-tier veil and colorful bouquet.

But it was more than Allen's clothes that made a statement. We cannot get enough of her manicure! The pop star opted for a bold design of hearts and sparkles in shades of pink, red, silver and white—proof that brides don't need to stick with neutrals on their wedding days.

And if the eye-popping mani and short-hemmed dress weren't enough to turn heads, the "Smile" singer celebrated her union with a trip to In-N-Out, which in our opinion is the coolest way to close the day! Besides, if she can look that good while enjoying a burger in a wedding dress, who wouldn't want to mimic her outfit?

So, no matter if you're marrying in Vegas, saying "I do" at home or walking down the aisle somewhere else, you can still channel Allen's non-traditional bridal attire on your wedding day. Ahead 12 dresses, veils and manicures inspired by this celebrity bride—the only accessory you'll miss is In-N-Out!

If the neckline and the hem of Allen's Dior mini is what you adore, then consider this Amsale number for your walk down the aisle. The soft faille gown has all the traditional bridal elements of Allen's sans the blazer sillhouette—making it a perfect choice for classic brides.

Another blazer option, the voluminous sleeves on this Bardot mini dress exude a dose of fashion nostalgia—fitting for a Vegas chapel venue like Allen used for her "I do's!"

If a short wedding dress isn't your speed, opt for a tea-length look like this off-the-shoulder gown by A.W.A.K.E. And don't worry, you aren't missing out on Allen's chic button details with this option—gorgeous black buttons line the back!

Allen's Vegas dress is transformed to match a more traditional celebration through BHLDN's Thompson Dress. The longer hemline is perfect for brides who want to rock a shorter gown, but still embrace a hint of the drama that comes with a floor-length frock. Oh, and we almost forget the best part: This look won't break the bank.

For a blazer dress that is anything but boring, turn to this sleeveless look. It's a wedding dress that is all about the details—hello lace, pleats and pockets!—and proof that when it comes to a casual "I do," you never have to sacrifice fashion.

A gown that brings Allen's look to the next level, we love how the sultry off-the-shoulder neckline and leather belt makes a statement. It's cool-girl-meets-bridal (a staple of designer Danielle Frankel's creations) and would match Allen's Vegas venue—or any venue for that matter—to a tee.

A no-fuss blazer dress with a hint of sparkle? Coming right up! Test drive this look at your rehearsal dinner, virtual wedding or even your courthouse nuptials—we promise this A-list ensemble will not disappoint.

While we love wedding gowns, no bridal look is complete without a few accessories! Match Allen's two-tiered veil with this delicate Etsy find.

To top off your look, consider this shoulder-length veil. Based on its gentle material and shallow hem, this accessory pairs perfectly with short wedding gowns. It is also a great in-between style for those debating a traditional veil.

This cirque veil can be worn two ways: draped over your face as a blusher or flipped back for volume. Either way, we love the simplicity of this veil (and the hand-sewn ribbon hem!).

No Allen inspired look is complete without sparkling nails! While not as colorful as the celebrity bride's bold manicure, these neutral press-on nails are just as fun. Plus, you don't even have to leave your home to get the salon-worthy look.