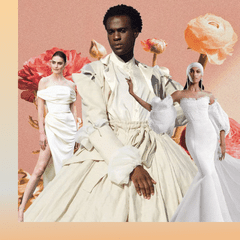 Plus, a look into how their brands are changing the industry as a whole.

At Brides, the foundation and underlying theme of everything we cover is love. From planning advice to spotlighting real-life wedding stories, love is at the core of what we do. And when it comes to planning one of the most special days of a couple's union (the wedding, of course!), it's safe to say that deciding what to wear is usually at the top of everyone's list. Very often we see and admire the dresses and suits that get sent down the runway and placed on the racks, but it's not often that we also get to honor the creatives who work tirelessly behind the scenes. More specifically, celebrating LGBTQIA+ wedding fashion designers.

According to some, the LGBTQIA+ community has been widely accepted and included in the bridal fashion industry. “As gay men, we found total acceptance in both bridal and regular fashion worlds,” says Mark Badgley and James Mischka, the designer duo behind Badgley Mischka.

Through my own challenges as a designer, I vowed to never make anyone feel lesser than when wearing my designs and to make all feel represented.

However, going beyond "bridal" has been, perhaps, the biggest challenge and change in the past several years. "The fashion industry—which I would say for the longest time—has been a big issue for designers of color and in the LGBTQ+ space. So often, we have been called upon to perform diversity, rather than have the industry truly practice it. It is so important that fashion recognizes this, our stories, and our achievements," says celebrity fashion designer, Prabal Gurung. "Through my own challenges as a designer, I vowed to never make anyone feel lesser than when wearing my designs and to make all feel represented."

So to help honor and celebrate the fashion creatives within this community, we've rounded up six LGBTQIA+ wedding dress designers who use their platform to propel inclusivity for people around the world. Read on to learn more about their brands and understand how they're also changing the industry as a whole.

After beginning his design career in New Delhi, Gurung moved to New York to attend Parsons School of Design, later launching his eponymous ready-to-wear label in 2009. “When I started my brand 12 years ago, I found it important to always showcase marginalized people and highlight that they matter across fashion and in the world,” says Gurung. And that's exactly what the designer achieved!

A favorite among notable figures—like former first lady Michelle Obama and Duchess of Cambridge Kate Middleton—Gurung officially launched his inaugural bridal collection in April 2021 with brides of all styles and bodies in mind.

“My brand has never been gender-normative and I’ve never wanted to dictate who is wearing my designs. Prabal Gurung is for everyone—offering all a seat at the table," the designer previously told Brides. "I wanted to take on the responsibility of properly celebrating all the incredible individuals who have walked in our lives. This is my ode to them. My job as a designer is to liberate anyone wearing my clothes and to offer them options,” he adds.

His commitment to gender inclusivity and representing marginalized audiences can certainly be seen through his bridal collection. “It’s been an incredibly difficult year for all and I wanted those who wear this collection to feel glamorous and well-represented on the most important day of their lives," shares the designer. "The very fact that people fall in love and get married is this idea that the union is the ultimate sign of hope and optimism.”

Married powerhouse couple, Mark Badgley and James Mischka, have been designing dresses for brides since the inception of their company in 1988. From romantic wedding gowns to elegant formalwear, their timeless designs continue to captivate women around the world—including the likes of Madonna, Jennifer Lopez, Rihanna, Jennifer Garner, and Julia Roberts (to name a few).

With such an impressive history and reputation within the fashion space, you may be asking: Who does Badgley Mischka design for?

“Our bride is an individual that makes her own choices," reveals the design duo. “Our goal, whenever we design anything, is to make our customers feel empowered and beautiful—it’s the same thing. If she feels beautiful, it makes her more powerful in big and small ways. If she is empowered, she is more beautiful in so many ways.”

The Ultimate Guide to Wedding Dress Shopping
03 of 06

"I heard a lot of the same questions revolving around what each of us would wear: 'Suit or a dress? Suit or a dress?' I hated that there were only two options, literally, black or white," Cassell explains. "I feel that removing all of this limited view or understanding of what's possible, we can reimagine the 'black or white' of traditions that are actually crippling to the fantasy when it comes to planning the 'best day of your life'. Recent times have revealed cracks in this certain patriarch that needs to be dismantled, and normalizing a wedding that everyone can afford is one of the first steps."

Cassell aims to transform the traditional use of the word "bride," as he creates clothing with everyone in mind. “My bride doesn't even fit into the word ‘bride,’ which is why QUEERA exists," the designer shares. "It's individuality. It can't be simply men or women. It can be anything, anyone—anything that's attracted by those who deserve it and want something different.”

After studying under Vivienne Westwood and Alexander McQueen, and later winning the fashion competition show, Project Runway, Christian Siriano went on to find his own namesake label in 2008. Following a brief hiatus in the bridal space, Siriano came back stronger than ever in 2021—releasing bridal looks that are "gender-bending" and, as Siriano puts it, made for "all different types of people—male, female, non-binary, transgender, and everyone in between."

Additionally, the celebrity-approved designer has transcended the bridalwear space, creating wedding-inspired mattresses for Beautyrest. "I wanted our brides to have the best night’s sleep of their life before the big day! It’s something we sometimes forget about, so I designed a stunning couture-feeling mattress that is elegant and comfortable. The two things I think you want on your wedding day!!”

According to the designer, the Christian Siriano bride is a bride who feels special, elegant, and comfortable. "A lot of our brides don’t live glamorous lives, so this is their moment to feel their best self and wear their perfect dress or suit, or whatever that dream may be!" says the current Project Runway host. "We make dreams come true over here at Siriano!”

As a whole, the designer explains that the Christian Siriano brand is for all. “I don’t necessarily approach my business in any kind of specific way. I make wedding looks for people regardless of how they identify," he says. "People are people. I’m a proud member of the [LGBTQ+] community and proud to have dressed so many in [Siriano] for their big day, and to shake up what the ‘norm’ looks like. There are no rules!”

A winner of the 2015 CFDA/Vogue Fashion Fund, Jonathan Simkhai started his brand five years earlier with the “modern woman” in mind. According to his website, “Through designs that seek to embolden women with confidence and ease, the brand represents modern versatility.”

Through all of his designs, “the core aesthetic philosophy plays with the tension of feminine strength and sensuality; this is reflected in the employment of customized fabrics, romantic detailing, linear lines, and contoured silhouettes,” as stated on his site.

“The brand was born out of the desire to make women feel beautiful, sophisticated, and powerful, with timeless garments that are impeccably tailored,” says Brandon Maxwell on his website. The decorated designer was awarded the 2020 AAFA Designer of the Year Award, the 2019 CFDA Award for Womenswear Designer of the Year, and he's a judge on Bravo TV's Project Runway. Maxwell is also a favorite among celebrities like Lady Gaga, Karlie Kloss, Oprah Winfrey, and Nicole Kidman.

In line with the rest of his collections, the Brandon Maxwell bride is sophisticated, independent, and timeless.