Who Is Kristen Stewart's Fiancée? 8 Facts to Know About Dylan Meyer

Plus, everything we know about the couple's wedding plans. 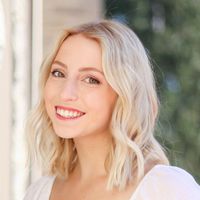 Kelsey Lentz
Kelsey Lentz is a contributing writer for Brides. Previously, she worked as a freelance writer for Nicki Swift, covering all things entertainment and celebrity news. Her work has also appeared in publications like The Hollywood Reporter and TV Insider.
Brides's Editorial Guidelines

While some A-list actors and celebrities have relationships as high-profile as their careers, actress Kristen Stewart has always kept her personal life out of the spotlight. So, it's no surprise that the public doesn’t know much about her new fiancée, Dylan Meyer.

All fans really know is that the couple is smitten—so much so that they decided to get married after only two years of dating! Kristen confirmed the engagement news during an appearance on The Howard Stern Show on Nov. 2, and shared some details from the proposal.

"We're marrying, we're totally gonna do it,” she told Stern, per E! News. “I wanted to be proposed to, so I think I very distinctly carved out what I wanted and she nailed it. We're marrying, it's happening."

In honor of the exciting news, we did a deep dive to uncover everything we could find on the Twilight star’s bride-to-be.

She is a screenwriter.

Like her fiancée, Dylan Meyer also works in the entertainment industry, and is actually a successful screenwriter with multiple credits to her name. Dylan co-wrote and executive produced the 2016 Netflix movie XOXO, which stars Sarah Hyland. She also penned some short films and a few episodes of the sci-fi series Miss 2059. Most recently, she co-wrote her biggest title yet—Moxie, Netflix’s teen feminist movie directed by and starring Amy Poehler.

In addition to writing, Dylan has also lent her talents to the screen and appeared in a few TV series and short films. Her acting credits include The Death and Return of Superman, Wrestling Isn't Wrestling, and Homemade—a short film she co-starred in with Kristen.

She is from Los Angeles.

There are plenty of reasons why Kristen Stewart and Dylan Meyer immediately hit it off, but that they're both Los Angeles natives was definitely an easy starting point and shared connection.

“We're both from LA and we really love LA.” Kristen said during a November 2019 interview on The Howard Stern Show. "We both felt like trolls as kids. We're like so similar but different. She's a writer. She's brilliant."

She is passionate about politics.

Dylan is very politically active, a passion she and Kristen both share. During the 2020 presidential campaign, she used her Instagram account to encourage her followers to vote. On Sep. 22, 2020, she let Kristen take over her Instagram and posted a selfie of the actress in a "Vote" t-shirt with the caption, “I turned the mic over to Kristen because she had some things to say and doesn’t have her own account. Happy #nationalvoterregistrationday!”

Dylan stressed the importance of voting again on election day by sharing a candid photo of her and Kristen with the caption, “I think I might chew my fingers off from nerves today but here’s a sweet photo @linseybrynes took. I really hope you vote."

Her political activism has spanned much of her life—she has shared multiple pictures on Instagram over the years that show her working bake sales for the ACLU, casting her vote in numerous elections, and canvassing for candidates.

Although the couple has only been dating for two years, they’ve technically known each other for much longer. As Kristen explained during an interview with Howard Stern in November 2019, she first met Dylan on the set of an undisclosed movie several years ago, but the two did not cross paths again until a friend’s birthday party six years later.

"She rocked up at a friend’s birthday party and I was like, 'Where have you been and how have I not known you?'" Kristen shared. From there, “all bets were off” and the couple has been inseparable ever since.

It’s pretty obvious that Dylan and Kristen have been head over heels for each other from the get-go. The pair was first linked in August 2019 when they were spotted kissing in New York shortly after Kristen’s breakup with model Stella Maxwell. A source told E! News, "Kristen is spending time with Dylan and very happy about it. She was seeing Stella for a little bit while it worked, but now she has moved on with Dylan."

Their relationship became IG official in November 2019, when Dylan posted a cute black-and-white shot of the pair kissing on Instagram. Apparently, Kristen also told Dylan she loved her only two weeks in.

"It was like really late, and we were in some sh***y bar, and her friends were there or whatever, and they like walked out, and I was just like, 'Oh man, I’m so f***ing in love with you. Done,” she told Howard Stern in an interview.

They've been talking about marriage for a while.

Prior to their engagement, Dylan and Kristen had been talking about getting married for some time. In fact, K Stew was actually planning on popping the question herself, and discussed how excited she was to marry Dylan with Howard Stern way back in November 2019.

She shared that she couldn’t “f--king wait" to propose to Dylan and felt confident that “good things happen fast.” Kristen even told Stern she had a few proposal ideas up her sleeve.

In July 2021, there were even marriage rumors swirling around when the couple was spotted wearing rings on their left ring fingers, as LaineyGossip pointed out. Though they never confirmed or denied the rumors, fans are happy to hear this highly anticipated engagement is finally official.

They want to have an untraditional wedding.

Now that wedding bells are really ringing for the happy couple, they have already started thinking about what their big day will look like. In classic Kristen Stewart fashion, the couple wants to keep things casual and are planning on having a bit of an untraditional wedding.

"I want to stay home," Kristen recently told Howard Stern. "I want to be in L.A. so everyone can come and ... I want it to be pretty chill. I don't want anyone walking anyone down any aisles. Like, we're just gonna stand, do vows and f--king party after."

Kristen said she views weddings as a “good excuse to get together and say ‘I love you’ in front of all your friends,” and wants the day to remain as simple as that. As for her attire, she said she plans on being barefoot and rocking a pair of Levi’s with a tuxedo print t-shirt.

Your First Look at Kristen Stewart as Princess Diana Is Here