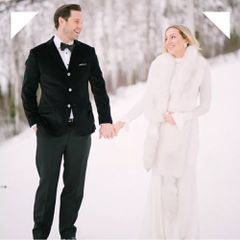 A Cozy Winter Wedding in Colorado With Just 17 Guests

Elizabeth “Brett” Miller likes to joke that her husband, Ryan Young, married the girl next door. The pair grew up living side by side, but the high school crush didn’t blossom into a relationship until the two were in their 20s. Once Ryan hit on Brett though, the rest, they say, is "history."

It was only natural that the couple would throw an at-home wedding, hosted by Brett’s parents, at their lodge in Arrowhead, Colorado. Brett and Ryan chose Christmas time—December 30th—because they knew the family would all be together and went about planning a chic affair for 17 people.

“We decided in September to get married in December of that same year so there was a lot to do,” Brett says of hiring Colorado-based planner Heather Dwight of Calluna Events. “It was pretty easy to plan because it was going to be at our home.”

What came together was a day that celebrated everything “winter in the mountains:” candles and Christmas tree lights, chocolate cake, and Champagne. It reminded the couple of all that they love about Colorado and their families.

Read on for all the details of Brett and Ryan’s animated wedding, planned by Calluna Events and photographed by James x Schulze.

The couple’s looks came about out of necessity. They wanted to be warm! Brett found her Caroline Hayden long-sleeve, velvet gown online and happened upon the white stole while shopping in Vail just the week before the celebration. Ryan wore a custom black velvet jacket by J. Hilburn which he paired with a set of black alligator cowboy boots.

“The crushes that we had on each other were rekindled,” Brett says of running into Ryan years after high school. “We’ve been together ever since that day.”

“Our wedding day was just a normal day with 17 people under the same roof…pandemonium,” Brett says of getting ready. The couple included every family member in a special way, like Brett’s nieces, who served as flower girls wearing cream, velvet flounce dresses with white tights, knit hats, and gloves.

The couple’s ceremony took place on the heated terrace of the home. Calluna Events draped faux fur wraps over the chairs for added warmth and lined the aisle with candles to enhance the “mountain chic” atmosphere. The outdoor fireplace served as the ceremony backdrop, complete with a sheepskin fur rug.

With the Christmas tree lights framing the altar, the couple exchanged traditional vows. They wanted to include the entire family in the ceremony. Their sisters presented special readings from the Bible and every guest took part in a sand ceremony.

Brett and Ryan began the sand ceremony, which involves pouring different colors of sand together in a vessel to symbolize unity. Each guest added another layer to their Jan Barbogolio vase to create quite the art piece. “It’s such a keepsake,” the bride says. “I enjoy looking at it every day.”

The newlyweds kissed for the first time as husband and wife in front of their 17 family members.

Local musicians on string instruments played a cover of The Beatles’ “All You Need is Love” as the guests lit sparklers during the recessional. The group then proceeded inside for a formal dinner of surf and turf and Champagne.

The mountain chic décor carried all the way to the two-tiered, multi-flavored fondant cake, which was accented with aspen leaves and pine cones.

“Mom collected wedding advice from close friends and family members who did not attend our wedding,” Brett says of a dinnertime surprise. “She read them at the table as we all ate. It was a very special moment.”

“Timeless,” Brett says of the day. “Years later, and I wouldn’t change a thing, style-wise.”