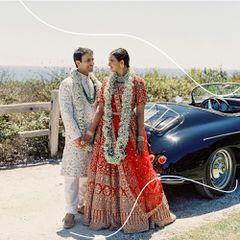 A Traditional Indian Wedding with Modern Design in Santa Barbara

Elle Cashin
Elle is a Chicago-based lifestyle writer and editor with a focus on bridal. Her work has appeared in Modern Luxury Weddings magazines nationwide.
Brides's Editorial Guidelines

Toral Vaidya and Raj Chimanji met more than a decade ago through her brother, Neel—Raj and Neel were college roommates and have been friends ever since—but didn’t reconnect until eight years later in New York City. They began dating in the fall of 2016.

Four years after that came the perfect proposal, on a surprise trip to Amangiri in November 2020. “As we were checking into the hotel, the resort staff recommended stopping at a scenic viewpoint,” Toral remembers. “A few minutes into our walk, Raj proposed. It was all truly a surprise—the trip, the proposal, and the ring.” (Raj had custom designed Toral’s dream ring with NYC-based jeweler Zameer Kassam.) After the obligatory calls to family, the couple did something unexpected: They turned their phones off for the next 48 hours, allowing time to focus on each other and soak up all the joy. “It was the trip of a lifetime,” Toral remembers.

The engagement was short—just over six months—because the couple knew exactly what they wanted in a wedding: an intimate, family-focused destination affair. “When we started wedding planning, Santa Barbara came to mind immediately,” the bride says. “We fell in love with the town during a drive up the Pacific Coast Highway a few years ago. We found this place to be truly special and knew we wanted to bring our families there one day.” And what better occasion than a wedding?

They pegged a planner local to the area, who would be familiar with their venue and vendors, and got to work. The result: A magical wedding for just 70 guests that seamlessly blended their Indian heritage with modern elements reflective of their personalities.

Read on to see how their wedding weekend played out,  as planned by Shauna Timmons of Santa Barbara Elopement and photographed by Kristina Adams Photography.

Toral and Raj’s stunning invitation suite featured burgundy text on shimmer card stock, and a custom floral print lined the envelopes. The suite outlined details for the whole weekend: A welcome dinner on June 21, 2021, and the wedding the following day.

Music was important to the couple, and they weren’t leaving it to chance: Instead of booking vendors local to their destination, they flew in artists from New York City to perform. “For our welcome dinner, we featured Indian-fusion musicians,” Toral says. Nihal Singh performed on tabla and dhol, while Shyam Lalani beat the handpan.

Toral and Raj matched their attire to their Italian-themed welcome dinner’s blue color scheme. Toral wore a floral motif hand-embroidered silk dress by Anita Dongre with beading and sequins. “I have always been drawn to Anita Dongre’s approach to Indo-Western wear,” Toral says. “I went with my mother to her studio in Soho and immediately fell in love with this dress.” The groom wore a tan Sandro suit and Bottega Veneta lace-up leather oxfords. “Raj loves making a statement with his shoes.”

The welcome dinner took place at Villa & Vine, a chic venue just blocks from the ocean and surrounded by the scenic Santa Ynez Mountains. “The venue was magical, and reminiscent of a villa and garden in the Italian Riviera,” Toral says. Long farmhouse tables were arranged in rows around a tiered water fountain and locally sourced florals like delphinium, forget-me-not, and clematis bloomed in shades of blue.

Looking out onto the coastline as I was getting ready was a calming and serene experience.

The couple fell in love with The Ritz-Carlton Bacara, Santa Barbara for both their ceremony and reception. “The location felt exclusive, like a true escape,” Toral says. The breathtaking coastline, tall palm trees and coastal grasses, striking bluffs, and Mediterranean architecture set the perfect scene. “On the morning of our wedding, Santa Barbara’s ‘June gloom’ had just cleared,” Toral remembers. “Looking out onto the coastline as I was getting ready was a calming and serene experience.”

Toral designed her own jewelry set for the wedding—including a choker, earrings, ring, jeweled belt and anklets—and had it custom made in India. “I chose a combination of gold with green beading to complement my red lehenga,” she says. “I also wore gold bangles that had been passed down through generations of women in my family.”

“Spending quality time with my mom as I got ready for the ceremony was a really special experience,” Toral says. Her mother helped her into her lehenga, a red and gold confection with delicate floral embroidery custom made in New Delhi. But it only looked delicate: “My wedding lehenga weighed almost 30 pounds,” Toral laughs. “Being an Indian bride is practically a sport!”

A lover of shoes himself, it was only fitting that Raj gifted his bride with a new pair. The night before the wedding, he presented her with sandals from the Christian Louboutin x Sabyasachi collection. (Sabyasachi is a famed Indian designer best known for creating Priyanka Chopra’s wedding lehenga, which reportedly took more than 3,000 hours to handcraft.)

“I wanted my look to transition effortlessly from day to evening,” Toral says of her glam. “I opted for a bright, natural look during the day. For the ceremony, I wore an updo that was simple and elegant. Since it was an outdoor ceremony, I wanted a look that would stay neatly pinned back.” She styled it with a custom tikka—traditional Indian headpiece—that matched her jewelry.

On the morning of the wedding, “Raj had it pretty easy!” Toral laughs. “He woke up, took a long bath, and got ready in 30 minutes. Meanwhile it took me four hours to get ready!” The groom donned a custom ivory silk sherwani with gold floral embroidery mirroring that of Toral’s lehenga. Over top, he wore a custom three-tiered mala necklace that complemented the green beadwork of the bride’s jewelry set.

We wanted our wedding attire to reflect our personalities. Designing and styling our outfits was one of the most fun parts of [planning].

“While Raj and I are physicians, we have both always taken an interest in fashion design,” says Toral, who pursued a degree in fashion design at Parsons before enrolling in medical school; Raj designed and produced a men’s clothing line while in college. “We wanted our wedding attire to reflect our personalities. Designing and styling our outfits was one of the most fun parts of [planning].”

We wanted our wedding to reflect the beauty and grace of our culture, while sprinkling in a few modern elements in keeping with our aesthetic.

“We are both first-generation children in America, and have always found it important to embrace our heritage,” Toral says. “We wanted our wedding to reflect the beauty and grace of our culture, while sprinkling in a few modern elements in keeping with our aesthetic.” Case in point: Rather than riding in on a horse for his baraat, Raj arrived in a vintage 1958 Porsche Speedster.

Exchanging malas, or flower garlands, is an important part of the Indian ceremony—but it was another way the couple made tradition their own. “Following the baraat, we exchanged garlands made of baby’s breath, instead of traditional roses and carnations,” Toral says. “I loved the effervescent look of the baby’s breath alongside our intricate wedding attire.”

Carrying a dozen long stemmed white roses, Toral was escorted down the aisle by her mother’s cousin and maternal grandfather. An instrumental version of James Blake’s “Godspeed” wafted through the air. Also in the processional: the couple’s nieces and nephews as flower girls and ring bearers. “My one-year-old niece, Aneri, had just learned to walk a few weeks before the wedding,” Toral says.

Guests sat in fruitwood Chiavari chairs and shaded themselves with ivory paper parasols that they took home as keepsakes. “This kept them comfortable in the California sun, while creating a beautiful ambiance during the ceremony,” Toral says. A live flutist provided instrumentals.

Their ceremony included a number of traditional Indian rites, including the saptapadi or seven steps. “These represent the first seven steps we took together as husband and wife; we moved from flower to flower as the priest recited seven verses.” One other tradition, the joota chupai, provided some laughs: “My younger cousins managed to steal Raj’s shoes during the ceremony,” Toral says. “In keeping with tradition, he had to pay them to get his shoes back.”

Guests tossed red flower petals, blessing the couple as they recessed out as newlyweds. “The red rose petals contrasted the white blooms lining the aisle, creating a a really beautiful effect,” Toral remembers.

By the end of it, everyone who had attended our wedding was family—and that was a really beautiful feeling.

“We always knew we wanted to have an intimate wedding with our families,” the bride says. “Hosting a destination wedding made our wedding week feel like a family vacation; it was a reflection of our love for each other, our rich culture, and our close-knit families. By the end of it, everyone who had attended our wedding was family—and that was a really beautiful feeling.”

The vidai is another Indian tradition—it’s the bride and groom’s “farewell” after the marriage. Toral and Raj completed the ceremonial escape in the Porsche Speedster as guests headed into cocktail hour for Indian-fusion hors d’oeuvres, like paneer served in an edible cone.

Raj’s family gifted the bride and groom with matching diamond tennis bracelets, which they wore for the reception. Toral also designed a pair of earrings for her second look, featuring mixed cut diamonds in a vine drop shape.

“I wore an Indo-western white gown for the reception,” Toral says of her custom piece, which featured pearl beading and embroidery on silk and tulle. “I wanted to have my moment in a white dress, while alluding to my culture. The traditional Indian beadwork set on a modern, high-neck silhouette was the perfect blend I was looking for.” Meanwhile, Raj changed into a Acne Studios suit and slipped on a Cartier watch gifted to him by the bride’s parents.

“Much of our decor inspiration was from the venue itself,” Toral says. Sophisticated white florals were set aglow with soft candlelight in the hotel’s Rotunda. Dinner was served family-style—“it made our reception feel like a big family dinner”—and consisted of classic Punjabi dishes paired with locally sourced wine from the Santa Ynez Valley.

Speeches at the reception were a favorite moment for the couple. “My dad’s speech filled the room with tears of joy and laughter,” Toral remembers. “My dad loves to tell the story about how he bought a Mercedes-Benz in 1993, on the day I was born. During our wedding, he gifted Raj and I this car.”

Following dinner, the party featured two live sets from NYC-based deejays outside on the terrace, where string lights twinkled above the dance floor. “This added an extra sparkle at night,” the bride says.

It was truly the best day of our lives.

“Trust your intuition and enjoy yourselves,” Toral advises other brides and grooms. “It was truly the best day of our lives.” After dancing the night away, it was finally time to rest and recharge. The couple spent a relaxing spa day at San Ysidro Ranch and then took off exploring the Santa Barbara wine country. Next on the agenda: a trip to Italy in 2022 for their official honeymoon.