The 10 Most Iconic Black Power Couples of All Time

From past to present. 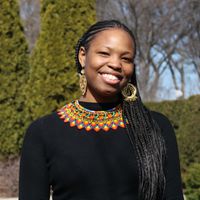 Jada Jackson
Jada has worked as a freelance journalist for over three years. She has written about various topics ranging from fashion, beauty, and culture.
Brides's Editorial Guidelines

As we reflect on the Black culture and Black history, we can not forget the importance of black love. Throughout the past and now into the present, Black couples have long stood as a representation of strength and endurance within the Black community. The late activist Bell Hooks describes love as being a multitude of things: “To truly love we must learn to mix various ingredients–care, affection, recognition, respect, commitment, and trust, as well as honest and open communication.”

With this in mind, Brides felt it was vital to share some of the most iconic black power couples from past to present.

When one thinks of the quintessential black power couple—Martin Luther King Jr. and Coretta Scott King are at the top of mind. The two civil rights leaders helped to make sure the plight of black Americans was heard and pushed for the eradication of racism throughout all institutions. Though many might have seen Coretta as a side figure, she in fact served as a powerful force in her own right.

Their love was a bit different as they met at a more mature age and had already had previous marriages under their belt. Before Machel met Mandela he had already solidified himself as a freedom fighter from African people in South Africa and abroad. But Machel, who was once the former first lady of Mozambique was known well for her grace, class, and social activism. Together they formed a loving and inseparable bond that lasted until Mandela died in 2013.

Though the two never wed, Oprah Winfrey and Stedman Graham have managed to maintain a partnership that has lasted for 36 years. The couple first got together in 1986, shortly before the debut of The Oprah Winfrey show. Over the many years they were together, they would become subject of tabloid fodder. In 1992, Graham finally popped the question to Winfrey while at her Indiana farmhouse. The engagement would be called off the next year, as they both decided to instead enter into a “spiritual partnership”, which Winfrey later explains is what kept their relationship alive for this long.

The two actors met in 1977 on the set of a film and married some years later in 1983. Over a 38 year marriage, Denzel and Pauletta have embodied a partnership that’s exemplified both grace and endurance. They have four children including actor John David Washington.

Former president Barack Obama and former first lady Michelle Obama will forever live on as one of the most defining couples in current American history. Together, they broke past social and political barriers and showed to the world at large how powerful black love can be.

The two met in 1989, when both Barack and Michelle were working at a law firm in Chicago. Michelle was assigned to help mentor her now-husband as he was an incoming summer associate at the firm. After two years of dating, they got engaged in 1991, and then married in 1992. In 1998, the two had their first child, Malia, together, and three years later, they welcomed their second child, Sasha. This October, the two will celebrate their 30th anniversary.

Angela Bassett and Courtney B. Vance

The 9-1-1 star and her Tony award-winning actor husband, Courtney B. Vance, met when they were both attending Yale School of Drama back in the 1980s. Although, Vance reports he didn’t remember from their drama school days. They later tied the knot in 1997. In 2006, they welcomed their twins, Bronwyn and Slate, via surrogate.  Basset attributes her marriage's longevity to “marrying the right person,” she explained in an interview with People magazine back in 2020.

Multi-award-winning actress Viola Davis and actor Julius Tennon married each other in 2002. Before meeting the love of her life, Davis said she struggled with feeling lonely. But now, the two share an unbreakable bond and have since adopted their lovely daughter Genesis, who is now 10.

Beyoncé and Jay-Z make 21 years look like a cakewalk, especially when you look at the expectancy of most Hollywood marriages. Though their lives as a R&B diva and rap legend has put them through some trying times, they remain strong and crazy in love.

Beyoncé and Jay-Z's Relationship Timeline
09 of 10

Actress Gabrielle Union and NBA star Dwayne Wade have been together for seven years and have found a way to make their blended family work. The struggles with infertility to balance their relationship against demanding careers is definitely a testament to the resilience of Black love.

Ciara and her NFL husband Russell Wilson met at a University of Wisconsin basketball game on March 26, 2015. The two made their first public appearance together at the White House Correspondents Dinner in April of 2015. It was clear to many that sparks were flying between the two, and they both got engaged in March of 2016. In July of that same year, they tied the knot.

43 Famous Celebrity Couples Who Make Us Believe in Love