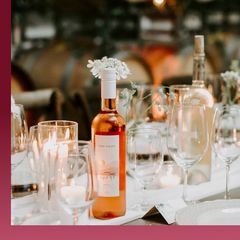 How to Buy Wine in Bulk for Your Wedding 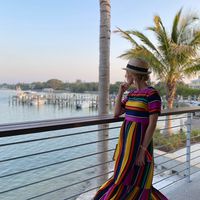 Lidia Ryan
Lidia Ryan is a journalist, editor and digital producer with 10+ years in both hard news and lifestyle content.
Brides's Editorial Guidelines

Not sure how much wine to buy for your wedding? Well, you need to consider what kind of event you're planning first. Fallon Carter of Fallon Carter Events has seen weddings become a lot more intimate since the start of the pandemic with couples opting for elaborate dinner parties at home rather than crazy dance floors. “A lot of people are going the route of using the venue that’s right in their backyard, literally,” she says. “And, we love it. We love at-home weddings; it adds a level of intimacy you can't duplicate.”

Often times, these low-key weddings have a more budget-friendly approach to alcohol as well. A wedding that serves only wine and beer has traditionally been a cost effective way to do a DIY bar. But, Carter says these days, it goes beyond that. “People are being more adventurous and going to wine tastings and finding wine specific to their events and their menus. We had a wine tasting for one couple to hand-select per course,” she says.

She recently helped a couple plan a five-course dinner and wine pairing at their home, right down to the dessert wine. “It was deliciously detailed and guests were pleased with the outcome because it’s not an experience you get often to go to someone's home and get a Michelin-star experience,” she says.

Of course, doing something like this at home—or planning any type of backyard wedding—requires a lot of planning and know-how when it comes to purchasing wine in bulk for the event. Luckily, there are resources out there to help and you can always ask your local liquor store, bartender, or restaurant owner. Experts and couples who have been there are also here to help.

How Much Wine Do I Buy and When?

As a guide, Total Wine & More recommends 75 bottles of wine for an event with 150 people lasting three to four hours. For more than four hours, they suggest 90 bottles. That may seem like a lot, but Elyse Dawn of The Wedding Planning Guide says, “I did a backyard wedding with a couple who didn't think their group was wine drinkers, and then it was gone in an hour.”

For a small wedding of only 50 guests, those numbers go down to 25 to 30 bottles. Carter’s advice is to first and foremost think about your guests and get an idea of how many wine drinkers will be on hand and how much you estimate they will be drinking. Think, is this a subdued crowd or a party crowd?

Katie and Nick Dunn like Chardonnay and Cabernet Sauvignon, so that’s what they bought for their wedding. To keep things simple, the couple chose one type of white and one type of red wine to serve at their backyard nuptials. To figure out how many cases to buy—there are 12 bottles per case of wine—the couple rated each of its 100 guests by not only how much they were likely to drink in general, but also by if they were big wine or liquor drinkers. “My in-laws’ side of the family are big wine drinkers, while my family tends to enjoy a mixed drink over a glass of wine,” says Katie. “We had 50 friends there and they were more beer and liquor drinkers, so the wine was mostly there for my husband’s family and the older crew.”

Because they knew their crowd was not too big into wine (in fact, they had a lot left over), they opted for only the two types. But, Dawn recommends having a variety. “From observing weddings, red doesn't go as fast, so get more white,” she says. “Get a dry white and and a sweeter one. If what you're serving is wine and beer, there are a lot of people who don't drink beer but will drink a sweeter wine.”

“Even though we had a surplus, we didn't mind it because we knew we would drink it. It is a nice benefit to buying your own alcohol because you can get what you like, and in the event you do end up with excess, you’ll drink it,” she says. “We kept a case of red because we like to drink it throughout the winter and bring it to family parties.” To that end, Elyse recommends buying more than you think you will need, especially because you can return it or, as the Dunns did, enjoy it yourselves. And, there’s nothing worse than having to go for a wine run in the middle of a wedding.

Regardless of how much you buy, it’s always a good idea to buy in bulk as many stores and warehouses offer discounts when you buy by the case. Dawn recommends using a local provider rather than ordering online so that you can, not only get drop-off service, but also stop in to ask questions and possibly taste test. Total Wine & More recommends putting your order in two to four weeks in advance, which is what the Dunns did. They ordered from a local liquor-store chain.

How Do I Choose My Wine?

It’s important to think about the date of your wedding and the forecast. If it’s going to be hot and sunny, go for refreshing wines like rose and Sancerre rather than red. As we enter fall, heartier reds can join the menu. It’s also important to think about your the food pairing—is there meat on the menu? Fish? All of these things should impact how you choose your wine. Liquor providers, like Total Wine & More, for example, offer consultations for couples to help determine how much wine to buy and what kind, which they recommend scheduling three to five months in advance.

Katie and her husband knew which Chardonnay they wanted to have, but to choose the Cabernet, they invited Katie’s mom over to do a blind taste test of four brands paired with snacks. “We talked about the notes and flavors and gave them ratings. We bought one bottle we thought we all would really like, and we ended up hating it compared to the other bottles, so I’m really glad we did that,” she says.

The Ultimate Guide to Wedding Drinks

“I love the thought of a wine tasting,” says Elyse, who adds that many caterers will do a wine pairing with the food tasting. She also suggests setting up a tasting at a local vineyard if you want to include local wine. “It’s a fun way to get excited about it.” Carter also adds that some bartending services will actually include a sommelier to help you.

The Dunns chose Prosecco as a cost-effective sparkling option. They had decided not to do a champagne toast, so they knew they didn’t need too much. And, in Katie’s opinion, champagne can taste “harsh” if you don’t get a high-quality brand. So, when her cousin brought a light Prosecco to the bachelorette party, she decided to go with that.

Dawn says that’s a smart option to keep the cost down. “I don’t think anyone goes to a wedding expecting Crystal,” says Dawn. “But, you should try to do middle-of-the-road champagne if it's in your budget. If not, prosecco is a good choice.”

Speaking of bartenders, experts agree it’s a good idea to hire someone whether it’s a fancier event with a different wine glass for each varietal or a backyard wedding with clear plastic cups. “One of the problems you may run into at home is not having a place where you can wash glasses,” says Dawn, who recommends plastic for a less formal affair.

Carter reminds couples that white and sparkling wine will need to be chilled, so hiring a bartending service to come ahead of time and set up will eliminate the chance of  having warm champagne—a faux pas for sure. Just remember once a case of wine is chilled, it is no longer returnable. So, instruct your staff to chill as they go rather than put everything in the cooler at once.

Dawn also recommends ordering your wine from a local place that will do drop-off and delivery service. “If you're at a venue and doing your own liquor—I’ve seen regret in couples’ eyes that they now have a ton of leftovers that they have to load into someone's car,” she says.

But, overall, Dawn’s number one advice is to just choose what you like and not worry about it too much. “Don’t overthink it, she says. “A lot of couples think things like, ‘This guest likes this and that guest likes that.” Buy what you want and everyone will find something they enjoy.”

The Ultimate Guide to Wedding Drinks