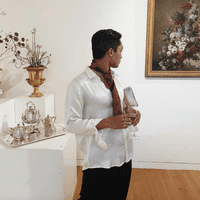 When Amanda Scriver and River Gilbert decided to take the leap and spend the rest of their lives together, traditional wedding garments were never a part of the plan. In fact, neither was a traditional ceremony. “Neither of us was keen on having a big wedding, but rather a celebration of our love with our family, friends, and chosen family,” Scriver, who uses she/they pronouns, tells Brides. So, the two swapped a grand church for a drag brunch and their clothes were anything but your average black tuxedo and white wedding dress.

In the chosen theme of a "slightly more neutral take on Met Gala: Notes on Camp," Scriver and their partner were set on clothing choices with bold prints, loud colors, and “dopamine dressing to the max.” They pulled together a few Pinterest boards for inspiration before their looks were born.

“As an individual who identifies as fat, I already knew I didn’t want a traditional wedding gown,” she says. “I had been casually scoping out some of my favorite independent plus-size designers to see what kinds of ‘wedding’ adjacent dresses they had and ended up stumping across this gorgeous I ended up stumbling across a gorgeous silk dress from indie designer WRAY.” Scriver’s partner, who uses they/them pronouns, picked a shirt with pink, blue, and green hues because of their love for birds and flowers.

Gender-Inclusive Wedding Roles and Titles to Use While Planning

This exploration outside of the traditional boundaries of wedding dress codes is a frontier that LGBTQ+ people are frequently taking head-on. Perhaps the most visible example is Marc Jacobs, who consulted with the tailoring experts at Savile Row’s Hunstman to craft a wedding look worth noting in 2019. Instead of a plain tuxedo, the renowned designer chose a suit adorned with pagoda shoulders to leave a lasting dramatic effect.

Opting in for wedding attire that best fits how one identifies has proved to pay off tenfold. “I did not realize how much our clothing would affect me or just how much the overall day would have an effect on my feelings,” Scriver says. “But watching the person I love so dearly feel so affirmed in who they were, how they were presenting, and watching us come together to spend the rest of our lives together–it reminded me of how we were meant to find one another and be here.”

How to Find Gender-Affirming Fashion

Liberation from the constraints of traditional wedding attire certainly feels sweet, but it can also present a major issue: Where does one start? With limitless options, as well as the freedom to do whatever one’s heart desires, how does one begin to build the wedding look of their dreams? Scriver and Gilbert took to Pinterest, while Jacobs already had a treasure trove of creative ideas.

Emma Gage, the founder and designer behind the gender-neutral brand, Melke, knows how to tackle this issue well. Not only is the New York City-based designer focused on building ethical, sustainable, and gender-neutral fashion, but she is also helping LGBTQ+ couples of all sorts craft the wedding looks of their dreams.

The process begins quite simply. “When creating an outfit for a special event such as a wedding, it’s important to know how someone expresses themselves through clothing in their daily life,” Gage tells Brides. Without it, utter catastrophe. “The last thing you want to do is to create something that doesn’t fit their personality!” According to the designer, the fun part shortly follows. Creativity begins to flow between the designer and couple, as each is able to add to the ideas initially had. Usually, couples come to Gage with an idea of who wears what, whether that means they are both in a dress, a suit, or a mix. “The most common theme I see is if both are wearing a dress or suit, is that they don’t want to be wearing the same exact thing.”

Adding to the list of stellar examples of the LGBTQ+ changing the game of wedding attire is Gage’s friend and client, Shannon. “What was unique and fun about designing for her is that she really wanted a piece that was convertibly and fully sustainable,” Gage says. The designer’s friend ditched the white wedding dress but didn’t lean entirely into the world of tuxedos either. “She was looking for a more minimalistic and masculine design, so it was a technical challenge to create a separating skirt that was more than just bustle, or a tulle skirt attached with a ribbon.”

Not only does stepping beyond the traditional boundaries of wedding attire sound freeing, but it also sounds fun. Isn’t that what a wedding day is all about? As you’re envisioning yourself walking down the aisle or saying “I do” to your significant other in front of those you hold close to you, remember the clothing you're wearing should reflect your most honest self. “In the end, what's most important is that you wear something that makes you feel your best and most like yourself," notes Gage. "The people who are there to support and love you will be happy no matter what.”