Congratulations to the happy couple. 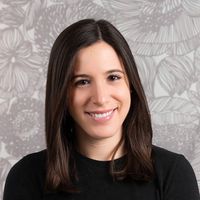 Samantha Netkin
Before joining the Brides team as an editor in 2019, Samantha began her career writing and managing social media for digital publications including POPSUGAR, Who What Wear, and Delish.
Brides's Editorial Guidelines

Hilary Duff and Matthew Koma are married! According to E!, the couple wed in an intimate backyard ceremony on Saturday, December 21 at their L.A. home. While details of the occasion are few and far between, we do know one thing about the nuptials: Duff's wedding dress! The actress commissioned designer Jenny Packham to create her custom gown.

Duff first revealed her wedding dress to the world the day after she said "I do" to Koma. Posing next to their getaway car, Duff captioned the photo with her husband, "This." The picture shows off the bride's custom gown—a crepe number with long cape sleeves and an open back.

Vogue later revealed details of the wedding gown, even sharing a video of Duff during one of her dress fittings. “It’s not heavy, but it fits like a glove,” Duff told Vogue. “There’s a very modern shoulder. When we were coming up with the design, it was important to me that it was striking but simple. I couldn’t imagine wearing a big fluffy dress.”

She also kept her accessories simple by wearing a delicate pearl and diamond headband by Jennifer Behr and earrings by Anita Ko. Duff also cut her hair quite short to show off the gown's large keyhole back—a trend we noticed on the 2020 bridal runways! Duff's 14-month daughter even matched her mother in a custom Jenny Packham empire waist dress.

Based on Duff's stylist's Instagram post, we can assume the venue's decor followed a warm palette of red, white and pink hues. “Winter solstice … a day of luv,” she wrote, posting a picture of an arrangement of peonies from the big day.

The Younger actress announced her engagement to the singer-songwriter on Instagram back in May, showing off her stunning three-stone, square-cut ring.

Just one month later, the couple announced they were expecting their first child together. They welcomed daughter Banks in October. Duff also has son Luca from her first marriage to hockey player Mike Comrie.

Congratulations to the couple and their family!

The 22 Most Influential Weddings of the Decade