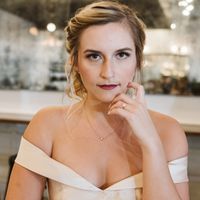 When it comes to glitz, glamor, and gorgeous accessories, no one does it quite like the Kardashians. And while the entire family serves as America’s royalty, Kim continues to reign as queen with her high-end style. In fact, even though her marriage to Kanye West ended in March 2022, that doesn’t stop us from lusting after the original engagement ring he gave her back in 2013.

To propose, Kanye gave Kim a spectacular 15-carat cushion-cut diamond engagement ring that doubled as a 33rd birthday present. The rock itself is a D flawless, type 2A diamond that designer, Lorraine Schwartz, described as the "perfect cushion-cut diamond." The massive stone is set in a platinum band that features a delicate, micro-pavé of diamonds and reportedly cost $8 million. Kanye also gave Kim an upgraded, second engagement ring in 2016 which was stolen during a robbery in Paris. This piece, also designed by Schwartz, featured an emerald-cut, 20-carat diamond.

Despite Kim’s second ring being larger, her original one is actually estimated to be worth more, and it still serves as the ultimate engagement ring inspiration. And yes, while very few to-be-weds can afford Kim's massive rock, that doesn’t mean you can’t replicate the style or aesthetic while sticking to a (much!) more realistic budget. Whether you love the solitaire cushion-cut diamond, the twinkling pavé band, or simply how over-the-top glamorous it is, there are plenty of sparklers out there that pull inspiration from this celebrity engagement ring.

That’s why we tapped some of our favorite jewelers for their best Kim Kardashian engagement ring lookalikes. Some feature clean cushion solitaries while others boast diamonds on diamonds to give you that endlessly sparkling aesthetic. Whichever route you go, any of these 21 rings are sure to have you feeling like the style icon herself.

If you want a ring that’s almost identical to Kim’s, this cushion-cut from Kwiat is going to be calling your name. Select your ideal diamond size from 1 carat to 4+, then watch it sparkle against the platinum pavé band. From the open setting to the hidden pavé halo, this ring will have you turning even the most disconcerting heads.

The emerald cut of this gem might remind you of Kim’s second ring, but it’s the halo (that presents the illusion of a larger center stone), the white gold band, and the pavé details that give us all the first ring vibes. What’s great about this Gemist option is that you can customize all the details from the metal type to the setting to the type—and carat—of the center stone.

We can’t get over how understated, yet elegant, The Georgia ring from Marrow is. The center stone is low profile so you’ll avoid snags, while the unique setting gives the diamond a floating quality that stands out similar to Kim’s. Select the style in the metal of your choice from yellow gold, white gold, rose gold, or platinum.

If you can’t get enough of Kim’s cushion-cut, elevate the look even more with this three-stone option from Haute Carat. The center stone—which comes in your choice of carat from 1 to 4—is flanked by two petite cushion-cut diamonds that provide even more overall sparkle. We love the style in platinum but choose from a variety of metals to make the look your own.

This 14-carat white gold engagement ring, from James Allen, can be customized to feature the diamond shape and cut of your choice; so mimic Kim with a cushion-cut, or branch out and explore other options like emerald, brilliant, or princess. The added halo gives the illusion of an even bigger center stone for that instant celebrity shine.

Lark & Berry’s Plum Trinity ring is unique because the emerald-cut center stone is framed by two baguette-cut diamonds, that seamlessly blend together for one show-stopping piece. Unlike Kim’s band, this one is pavé free and wide which adds a modern twist to the style.

Baguette Diamonds: The Complete Guide
07 of 21

For a more modest option, opt for this ring from Tiffany's that features a cushion-cut center stone, micro-pavé detail, and platinum band—ideal for the everyday celeb-at-heart. Pick the carat and clarity of your diamond depending on your budget and overarching vision.

Mixed metal rings can give the illusion of a larger stone as seen on this exquisite Brilliant Earth band. The center cushion is surrounded by ½ carat of scalloped pavé diamonds, that trickle down into the gallery and flow along the yellow (or rose, if you’d prefer) gold band.

Kim’s ring gets a Bachelor makeover thanks to this Neil Lane sparkler. The vintage-style cushion-cut center diamond weighs 2.03 carats and has a VS1 clarity. Two baguette-cut diamonds weighing 0.45 carats further frame the center stone, while another 194 full-cut diamonds decorate the halo, gallery, and band.

A nearly identical KK ring dupe with its platinum and pavé band, this option from Kwiat turns the solitaire stone giving it a contemporary east-west setting. Whatever size cushion-cut center diamond you choose, it will look even larger thanks to the unexpected orientation.

If you’re not a white diamond kind of bride, but love Kim’s chic ring, this option from Jewelry Point swaps that traditional center stone for a luxurious 1.98-carat black diamond. You can select this style in the precious metal of your choice, but we especially love how platinum makes the dark diamond pop even more.

A platinum diamond-studded band? Cushion-cut diamond? Sparkle from every angle? This vintage-style Neil Lane beauty has it all. The 2.48-carat center stone is further highlighted by 102 accenting diamonds, forming a double halo and channel band that adds an additional .65 carats to the already spellbinding statement ring.

Make Kim’s ring even sleeker by letting the center stone speak for itself. The Gemist keeps things ultra-clean with an oval solitaire that exudes elegance in white gold. This white sapphire option is great for anyone looking for a diamond alternative, and the customization features allow you to make the band unique.

Moissanite rings are a fantastic choice for brides who want the look of a large diamond but prefer something more sustainable. Leon Mengé delivers with a Kim-worthy 8×6 mm cushion-cut center stone, flanked by a halo and bright-cut pavé, all set in a sturdy platinum and ruthenium alloy.

Simple and sophisticated, Allurez’s modern, bezel-set solitaire features a singular stone just like Kim’s, but the pavé-free band—which comes in your choice of metals—makes it the perfect option for a more understated bride. Pair it with a diamond wedding band for some added sparkle.

This Kwiat engagement ring adds a twist to Kim’s band by setting it in rose gold and adding an additional diamond halo that surrounds the cushion-cut center stone. You still get the diamond cut and the pavé detail, but the metal switch and halo will help define your personal style.

Diamondère does Kim proud by taking the cushion-cut center stone of your choice (choose anything from diamonds to sapphires to lime green peridots) and pairing it with 20 round diamonds that dance down the white gold band. The standout feature is the kite setting that plays on traditional cushion-cut placement.

This playful spin on the Kardashian’s style features a sustainable, lab-grown cushion-cut center stone, and additional dainty diamonds that dot the band and gallery. What makes this ring especially unique is the starburst style halo that adds extra shine. Select the style in white gold, rose gold, or platinum if yellow gold isn’t for you.

Add a little more pavé to your band with this effervescent Haute Carat ring. The oval-cut center stone (which comes in your choice of carat) and the platinum band are reminiscent of Kim’s cushion-cut sparkler, but it’s the triple pavé of diamonds that truly has us seeing stars.

Another magnificent moissanite option, this vintage-inspired ring from Brilliant Earth boasts a cushion-cut center stone, pavé diamond detailing, and a platinum band just like Kim’s. However, it's the regal halo and subtle floral illusion that sets this stunner apart.

Take the Kardashian queen’s iconic style and make it your own with this diamond-adorned Badgley Mischka ring. The impressive 3-carat, cushion-shaped center stone appears even larger thanks to the twin trapezoidal diamonds that flank each side and the 36 round diamonds that make up the pavé and halo. At 4.13 carats, this is a star-worthy statement ring KK herself would likely say “yes” to.