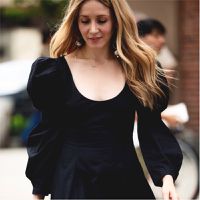 Laura Lajiness Kaupke
​Laura Lajiness is a writer and editor who covers fashion, accessories, beauty, and fine jewelry for Brides. Her work also appears in ELLE, InStyle, Glamour, Refinery29, POPSUGAR, Well+Good, and Barneys New York.
Brides's Editorial Guidelines
We independently research, test, review, and recommend the best products—learn more about our process. If you buy something through our links, we may earn a commission.

As far as bridal jewelry goes, your engagement ring is undoubtedly the focal point. And while it’s the one special bauble that signifies your relationship as a bride-to-be, a wedding band is equally special after you've said "I do." If you’re all about a blingy ring look, a baguette wedding band is a stunning choice.

What Is a Baguette Band?

A baguette band is a style that features at least one baguette diamond or gemstone, which can be long and rectangular-shaped or tapered.

"It was created in the 1920s and named for its elongated rectangular shape after a French baguette," says Madeline Fraser, the founder and CEO of the Gemist. "It’s timeless in its classic beauty, a cut that will never go out of style."

In addition to Fraser, we also spoke with industry expert Katie Zimmerman, the chief of merchandising at Blue Nile, to gain insight on all the details of baguette bands.


Keep scrolling to learn about the pros and cons of baguette diamond wedding bands and what to look for when shopping for one.

Whether you're flaunting a shimmering solitaire diamond, cluster of gemstones, or three-stone engagement ring, baguette wedding bands come in a variety of styles and shapes—from eternity bands with a single row of baguette stones to bands with alternating stone shapes that include baguettes and modern band styles with tapered or fanned baguettes. So, no matter your style—modern, vintage, or fashion-forward—baguette bands' versatility offers a forever-worthy look for every bride.

While baguette wedding bands are undoubtedly showstopping, they can also be a whole lot of look. The intensity of this statement piece may prove to be too overwhelming for some brides' everyday style. Especially when paired with an engagement ring, the two rings can exude tons of eye-catching sparkle (which may not be a bad thing!) but may also feel as if they contrast with your more casual looks or daily lifestyle. But, you can easily wear just your band or your engagement on days when you want to tone things down or as your mood changes. Can’t go wrong with options!

What to Look for in a Baguette Wedding Band

The 15 Best Places to Buy Wedding Bands Online in 2023

How to Care for a Baguette Ring

Be sure to clean your baguette stones regularly. "While diamonds last forever, regular cleaning and proper care are crucial to keep them brilliant and shiny. Everyday tasks can also cause diamonds to lose their sparkle, from skin oils to makeup and skincare products to dirt and other environmental dust," says Zimmerman.

It's important to clean underneath the ring's shaft so that dirt and other debris don't build up in the ring. If you're unsure of how to clean the ring, you can take it to your jeweler, who will delicately handle the band. "Ultrasonic machines are a good way to give your diamond a good cleaning on occasion, but really, the best way to clean your ring is with a mild soap and water mixture," suggests Zimmerman.

Be sure to store your band in a safe place, like a jewelry box or fabric-lined ring box, while partaking in hand-heavy activities, especially when they involve any products that may harm your ring over time.

The 29 Best Diamond Bands for Any Style

From classic eternity bands to glitzy modern takes, scroll through our edit of 28 extraordinary baguette wedding bands for every style and budget.

Set with a slim band, this ring has three baguette diamonds that sparkle from every angle. The 14k white gold pairs nicely with the diamonds to complete the ring.

Baguette diamonds wrap this eternity band in a never-ending circle band. The design is bold and bursting with sparkle to capture anyone's attention.

Baguette moissanite stones line this stunning yellow gold band. The baguette stones are separated with round moissanite accents, set with prongs to hold each stone separately in place.

If you want a more unique stone, opt for a white sapphire. The stones look just like their diamond counterparts but add a special touch to the band.

The delicate band makes a strong statement with its contoured design. The slight separation at the front of the ring highlight the two baguette diamonds.

The best feature of this ring is the design of the baguette diamonds. Each of the nine stones is placed on the ring at different heights to add versatility. None of the diamonds are the same weight making each stone unique.

Each peak on this ring is set with a small round diamond. A baguette diamond rests on the sides of the clean lines of the band.

A thick band makes all the difference in a ring. It sets a bold and unique aesthetic while remaining simple and elegant. This band features a baguette diamond at the center for a minimalistic touch.

Decorated with baguette diamonds throughout the entire band, there is no lack of shine. Set at various heights, each baguette is intricately placed on the rose gold band, which adds exciting details from every angle.

This large, square baguette ring is nothing but bold. The band remains plain while baguette diamonds are stacked at the front of the ring.

Flanked with two tapered baguette diamonds, this platinum band is for those who want a simple bridal ring that remains eye-catching.

This handcrafted ring features baguette diamonds in a bar end-setting. Each of the six diamonds is placed horizontally on the band and gives the ring just the right amount of shine.

With a scallop pavé setting, this baguette ring lines the front of the band. The rose gold looks polished paired with the baguette diamonds and leaves a sparkling and gleaming finish.

Instead of a traditional band, opt for a curve shape. The new form is modern and edgy. Five baguette diamonds are set at the curve of the ring for a feminine touch.

There are no rules stating that you have to stick with traditional diamonds. Instead, choose a colored stone that adds a playful touch to the band. This option from Sheryl Lowe has baguette diamonds that line the band while pavé diamonds create a border at the top and bottom.

This open-band silhouette features two tapered baguette diamonds with six clusters of diamonds at the sides. The best part? The band is easy to wear and won't get caught on objects throughout your day.

Everything is better in fringe, and this ring is no exception. The ring shows baguette diamonds that create the "fringe" on this ring. The band splits in two at the center, giving the illusion of a double-banded ring.

The Paloma ring is inspired by a traditional diamond ring. Instead of holding to a typical shape, the baguette diamond sits at the front of the ring in an asymmetric setting.

Inspired by the 1940s, this ring has a vintage design with a modern edge. The baguette diamonds span halfway around the band. Paired with white gold, this ring has incredible shine.

A thin band is best for layering rings and providing a delicate look and feel. This ring keeps its weight light without sacrificing style. Baguette and round diamonds alternate around the band to add extra details.

Top a traditional baguette diamond band with a string of classic diamonds. Not only do you get the craftsmanship of the unique baguette diamonds, but the contrasting diamond shapes create a stunning balance.

Emerald-cut baguette diamonds are genuinely modern and stunning. This ring features an eternity band with diamonds throughout. There is no lack of shine in this ring—it sparkles from every side.

There's nothing better than a classic ring that has an upgraded modern touch. This ring takes a traditional baguette diamond-studded band and doubles the fun to create a modern design.

If you're seeking a ring with an elevated design, this ring is for you. Baguette diamonds are placed around the white gold band to look like sparkles. The ring is also available in rose or yellow gold.

Horizontally set baguette diamonds adorn the entirety of this platinum band. Bold yet classically beautiful, a piece like this not only pairs well with a wide array of engagement rings but is strikingly stunning on its own.

Inspired by the Japanese tradition of folding paper known as origami, the strong elements of this baguette diamond ring exude a bold and contemporary essence. Set in 18k rose gold, this piece would pair well with a modern and minimalistic engagement ring.

A.Jaffe Alternating Round and Baguette Band Ring in Platinum

This bezel-set diamond band is the perfect mix of classic and modern. Featuring alternating round and baguette diamonds, this stunner can be set in an array of metals, including platinum, white, yellow, or rose gold.

Sustainable Diamonds: Everything You Need to Know