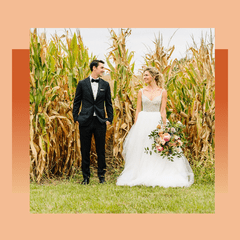 A Formal, City-Chic Wedding in a Cornfield on an Iowa Farm

When New Yorkers get married in Iowa, what do they do? Bring Soho House vibes to a family friend’s farm, of course. When Sierra Smith and Brian Burke decided to forgo a city wedding for one near Sierra’s childhood home, they knew they didn’t want it to skew country. Instead, they threw a formal black-tie affair, melding the big apple with the midwest’s fall colors.

"Our goal for the wedding was simple, make it a reflection of us: fun and fabulous,” Sierra says. “We wanted our guests to go home after the weekend and say, ‘Now that was a good time!’”

The couple hired Katie Jethwa of Kate Elizabeth Brides to pull it all together, with results that Sierra calls “a wedding beyond our wildest dreams.” It combined textures, like velvet and silk, with neutral tones and dusty hues. The planning team accented the flat land with more than 20 trees and a hand-painted dance floor–plus hanging lamps, a sailcloth tent, and an afterparty in a barn. In fact, the couple threw such a shindig that one of their close friends split his pants dancing so hard!

"Identify what matters most to you out of your wedding experience, and then prioritize that like crazy," advises the bride. "For us, it was creating a very fun and entertaining weekend for guests."

Read on for all the details of Sierra and Brian’s formal farm wedding, planned by Kate Elizabeth Brides and photographed by Betsi Ewing.

Sierra and Brian met while attending Harvard Business School and have lived together in New York City. But when it came to the venue for their nuptials, it was Brian who suggested the pair look at spots in Iowa. “It felt very unique and special to our story,” the bride says of the Poortinga Farm.

“Going in I wanted a big dress,” Sierra says of her Hayley Paige gown. “How many times in your life can you get away wearing layers and layers of tulle? I was not going to let this chance pass me by. I’ve always heard that most women end up with a dress entirely different than they had envisioned going in, but not me. I went in wanting big, and I came out with a big dress.”

On the wedding morning, Sierra dropped off a groom’s gift to Brian, a set of Smathers & Branson cufflinks.

“I recall designing personalized napkins for our wedding, and I probably spent four hours adjusting the location of the logo and size of the text,” Sierra says. “By the end, I was so frustrated and, well, there may have been some tears! To which Brian, with a hug, kindly reminded me that it’s just napkins. What great advice: focus on the big, and don’t let the small get you down.”

Sierra and Brian hosted the wedding at a family friend’s farm, called Poortinga Farm. Sierra was taken with the green grass that led to the cornfields, and the modern barn that juxtaposed the rustic midwest landscape. They set up the ceremony on the lawn overlooking the crops. It was pre-pandemic times, so they were able to invite 250 guests!

The couple recited personal vows that talked of their relationship from friends into lovers, and now to marriage. Sierra admits that Brian barely started his vows before her eyes teared up.

After the ceremony, guests strolled to the barn for cocktail hour, which included a donkey and lots of tequila. In fact, Sierra says that the bar staff told her they had never seen a wedding go through so much tequila! At that moment, she knew she’d thrown a great party.

The couple served a signature ginger hibiscus lemonade topped with edible flowers, handed to guests with the custom napkins Sierra spent so much time designing.

Guests found their seat assignments calligraphed on a statement gold mirror at the entrance of the reception tent.

The reception took place in a sailcloth tent that the planning team outfitted in a mix of colors, textures, and plenty of lamps. The inspiration was led with images of Soho House, a group of private clubs that take inspiration from the classic gentleman's clubs of London. It’s a blend of eclectic décor and a refined palette, with plenty of nods to comfort.

“We brought in furniture including daybeds, large ottomans, wicker chairs, and rugs to make it feel comfortable and welcoming—basically, a Soho House in the cornfield,” Sierra says. “We also brought in yard games and had a cute beverage burro named Charlotte carrying hard kombucha to add to the fun.”

The clubby vibe really came into play with the various chandeliers hanging above every table in the tent. Some felt more glam while others looked like they had fallen out of a Restoration Hardware catalog.

“The very first inspiration photo I showed our wedding planner was of a bridal bouquet, and this was what set the foundation for the textures, trailing greens, and colors selected for the actual wedding day,” Sierra says of the mix of peonies, dahlias, roses, and thistle that popped up throughout the day.

The menu included a few nods to Iowa like mustard and pistachio-crusted mini pork shank and raspberry and rhubarb crumble. Each menu, as well as the table numbers, were printed in a modern script on white paper.

“They had the party bumping all night long,” Sierra says of Elan Artists, who provided the entertainment from ceremony to afterparty. That included a saxophonist playing covers of popular music, electric violist, and vocalists dancing in shiny sequin numbers. “They gave us not one, but two encores due to insatiable guest demand.”

“The cake was set up on a marble table in the corner of the tent, and we basically snuck off quickly from the dance floor to cut and snap a picture, then zoomed right back,” Sierra says of making the cake cutting a subtle affair. They had to, of course, get back to the dance floor.