Nail this timeless look on your big day with these classic slip dresses. 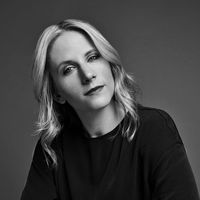 When Carolyn Bessette-Kennedy walked down the aisle on September 21, 1996, she forever changed the world of bridalwear. Before Bessette’s wedding to John F. Kennedy Jr. at First African Baptist Church on Cumberland Island, Georgia, it was Princess Diana’s elaborate tulle, taffeta, and lace gown with a 25-foot train—from her 1981 nuptials—that had set the trend for a generation of womens’ wedding gowns around the globe. Bessette’s dress, designed by her dear friend Narciso Rodriguez (the two worked together at Calvin Klein), was the ultimate antithesis of Diana’s ballgown—and broke all the bridal rules in the best way possible. It was strikingly simple and would come to define an era of minimalism, not just for bridal, but fashion as a whole.

The bias-cut, body-skimming silk gown was remarkably bare—it had no embroidery or rhinestones or ornamentation at all. Instead, the dress was all about the stunning woman wearing it. (It’s no wonder Narciso Rodriguez launched his namesake line the next year and catapulted to stardom.) She paired it with a silk tulle veil, long white gloves, crystal-beaded Manolo Blahnik shoes, and a bouquet of lilies of the valley. Her hair was pinned back nonchalantly in a low bun that looked equal parts effortless and chic. To this day, it remains one of the most timeless, iconic—and most copied—bridal ensembles of all time.

The 13 Most Iconic Celebrity Wedding Looks

If that famous shot of Bessette leaving the church is your ultimate wedding dress inspiration, look no further. We have rounded up some of our favorite current iterations of the Carolyn available now.

Not into classic white or ivory? This silky maxi dress with a dramatic side slit and cowl neckline is perfect for you. It’s very Carolyn-esque, but comes in various shades, like ‘light latte’ (pictured) and pale lilac, to mix things up from traditional bridal whites.

Consider this silk slip dress, featuring thin straps and a lace trim hem, a win. The keyhole neckline and beautiful center back buttons add a little twist to this uncomplicated and understated, but incredibly chic, look.

It’s the draped neckline and back that really conjure the spirit of Carolyn’s game-changing wedding dress (which also had beautiful draping). The ultra-thin ties on this Anna October gown give it a more current take.

This silk charmeuse gown nods to Carolyn’s look with its bias-cut, slip silhouette and thin straps. The V-neckline and adjustable straps add a slightly different element to the overall look.

If you love Carolyn’s wedding gown, but don’t want to wear something floor-skimming, this dress fits the bill perfectly. This satin, midi-length version has a cowl-neck and spaghetti straps, a la Carolyn, but the asymmetric hemline offers a bit of an unexpected, refreshing plot twist.

This is a completely fresh take on the Carolyn dress. It has that same sort of minimal, almost lingerie-like feel that Carolyn’s gown exuded, but this bias-cut silk chiffon slip number, from Khaite, features a stunning ruffled hem and double spaghetti strap.

Most Sexy: Norma Kamali Cross Back Bias Gown with Train

We can absolutely see Carolyn in this cross-back, bias-cut and cowl neck gown from Norma Kamali’s new bridal collection. If you want a ‘wow’ moment to the overall look, the flowing train does exactly that.

It doesn’t get more simple than this classic satin slip dress. The beauty here is in the details—the luxurious silk and long back slit will perfectly frame your figure. Plus, we can see this versatile number becoming a part of your regular wardrobe rotation post-wedding.

This thin-strap, halter-esque silk organza slip dress is the epitome of the 90s minimalist aesthetic Carolyn rocked on her big day, but with a twist. Skip the long white gloves and wear your hair in soft, tousled waves for a more laid-back, cool-girl look.

With the cowl neck and silky draping, it’s got that simple and elegant vibe of Carolyn’s dress and at this price point, you probably couldn’t do better. It turns up the sex appeal just a touch with the lace-up back and side slit. Classic and well-priced…it’s a win.