Her longtime friend gave her a fresh, glowing look. 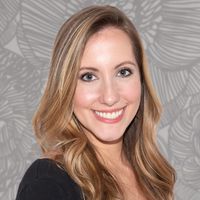 Lindsey Metrus
Lindsey Metrus is the editorial project director at Brides and has been with the brand since 2021. She also works on Brides' sister site, Byrdie, where she has been since 2015.
Brides's Editorial Guidelines

There may have been several unconventional aspects of India Hicks and David Flint Wood’s wedding, like the reception dinner held the night before the nuptials or the fact that the couple decided to wed after 25 years and five children together, but when it came to getting ready on her wedding day, Hicks preferred not to stray from familiarity. “At the age of 54, you don’t look for inspiration; you know what suits you best after so many years,” she tells Brides.  “Natural, natural, natural. I did not want to walk down that aisle and have David suddenly be faced with a completely new person. He was marrying me, the every-day-wake-up-in-the-morning-me. Just a bit of makeup was needed so I was presentable before God and congregation.”

To ensure she looked like the best version of herself, Hicks enlisted the help of her longtime friend and makeup artist/hairstylist Jo Adams. Aside from the fact that the pair have worked together numerous times and Adams could practically trace Hicks' face with her eyes closed, the bride-to-be felt inherently calm about her beauty look. "For many women, this is perceived as one of the most important days of their lives—all eyes are on them and they are the center of attention, so inevitably, there is pressure. However, has anyone ever seen an unattractive bride? No, because it's a day filled with love and happiness and every bride radiates that."

Because skincare is quite possibly the most important step in makeup application, Adams made sure to hydrate with a layer of The Rich Cream by Augustinus Bader, a favorite of Hicks' that she typically applies straight from the shower on damp skin to lock in moisture. After that, she patted on some of Murad's Multi-Vitamin Infusion Oil and let it soak in while she styled her hair. Finally, she patted a bit of Homeoplasmine on the lips, a French ointment that Adams calls "a little hidden treasure of a French pharmacy find." As a side note, Adams says incorporating a glycolic acid tonic is a great product for mature skin especially, as it "not only reveals bright new skin, but also supercharges the rest of your skincare routine and makes for a much better canvas for makeup," she explains.

For her makeup, Adams enhanced Hicks' complexion with Charlotte Tilbury Light Wonder Foundation followed by a dusting of By Terry Hyaluronic Hydra-Powder palette to "softly shape her face." For Hicks' lips, since she loves a "barely-there" look, Adams traced them with cult-fave Charlotte Tilbury Lip Cheat liner in Pillow Talk followed by Sisley's Phyto Lip Delight Gel Balm in shade Cool. ("It's not sticky, it just hydrates with a hint of a tint of nude and is perfect for someone like India," says Adams.) For Hicks' lashes, Adams first curled them ("always curl!") before applying individual Sweed Nikki No Lash-Lashes and a coat of Diorshow Iconic Overcurl Mascara.

In keeping with Hicks' zero-fuss approach to beauty, she didn't opt for several swanky treatments pre-wedding; instead, the only service she sought was some last-minute fresh blonde color at HARI's salon in London. "I had taken on being my own wedding planner which was a much bigger project than I had anticipated—hair somehow came last (napkins and bouquets were higher up on the to-do list)," she tells us. On wet hair, Adams worked in some Living Proof No Frizz Nourishing Styling Cream before blow-drying, then pulled the hair back into a taut chignon with a middle part. Because rain was in the forecast, Living Proof's No Frizz Humidity Shield helped keep the sleek style intact.

When I asked Adams for her best tips to help mature skin translate beautifully both in-person and in photos, she explains, "I pay extra attention to lashes and brows to frame and lift mature skin. Definition and placement are key and I sometimes use a touch of one of the Nudestix Nudies Matte Blush & Bronze—[in the shade] Sunkissed for India—to further sculpt either cheeks or eyes." For a fresh lit-from-within-glow that doesn't read too glittery or frosted, Adams loves finishing off the complexion with a sweep of Hourglass's Ambient Lighting Powder.

To help keep Hicks' makeup fresh all day long, Adams packed her a goodie bag of lip products, but both women tell me that the touch-up kit was destined to be left behind. "Jo always leaves me a little bag of goodies, a lip balm, a tiny comb, a dab of powder, whether I am going to a charity function, a TV appearance, a business dinner… and I always manage to leave the goodies behind. Jo should have learned by now: I am hopeless once I’m out the door," Hicks jokes. "We are very used to working speedily and multitasking, and so we were ready with time to spare," offers Adams. "I left India a little touch-up kit of lips, but I am sure she will have forgotten it!"