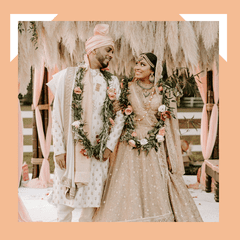 A Boho Ceremony and Glamorous Reception in Orlando, Florida

Amanda Balglobin and Kyle Minoo first met at a pool party when they were 12 years old. By the time they were in high school together in Orlando, Florida, they knew they were meant for each other.

To celebrate so much of their life as a couple, the pair threw a two-day wedding in their hometown on November 23 and 24, 2019. It combined West Indian and Western traditions: Amanda donned both a Sabyasachi lehenga and a Reem Acra gown while their families participated in traditional blessings and dined on beloved Guyanese dishes.

“Witnessing their two families become one” was the top memory for the couple, says Amanda. “We are both extremely family-oriented, dating for so many years our families have become familiar with one another,’ Amanda says. “Seeing everyone so happy and watching everything we planned unfold was so gratifying.”

For Amanda, there was also enormous satisfaction to be done with planning. She began the journey with a professional planner, but after realizing they didn't see eye-to-eye, she parted ways and started from scratch herself.

“I had the time of my life planning without having someone else in my ear,” Amanda says of her decision. “I chose my own vendors to execute my vision. A lot of the vendors had never had the opportunity to work on an Indian wedding, so it was equally exciting for both sides to create.”

Read on for all the details of Amanda and Kyle’s Orlando wedding, planned by the couple and photographed by Stephanie Velez.

The Moxie Shop created the invitations, which featured a botanical design that nodded to the couple’s Hindu ceremony location, the Bramble Tree Estate.

“At first, I was hesitant because I am not a ‘pink’ girl,” Amanda says of seeing her lehenga at The Bollywood Closet in Atlanta. “As soon as [the saleswoman] draped that color on me, I knew this was the one. The way it enhanced my skin tone and made me glow I was immediately in love.”

The dusty pink lehenga features gold embroidery throughout the blouse and skirt, with a whimsical sheer dupatta, all by Sabyasachi.

"Every bride’s dream is to wear his designs, so I was determined to do research and figure out how I make this a reality,” she says of flying to Atlanta—the closest retailer to stock the famed designer.

Amanda opted for green stones in her bridal jewelry to offset the pastel hues of her outfit.

As a “Game of Thrones” fan, Amanda had her mehndi artist design “moon of my life and my sun and stars” on her wrists.

The couple didn’t have a formal wedding party but Amanda did invite her sister and Kyle’s sister to be bridesmaids.

To coordinate with Amanda, Kyle wore an ivory sherwani and kurta set, also from Sabyasachi. He added a blush pink safa and a long pearl necklace.

After Kyle’s baraat, the families met for blessings with their pandit, Raj Balkaran.

Guests made their way to the ceremony location at the rustic Bramble Tree Estate.

Inspired by their venue, Amanda took an unconventional approach to the traditional Hindu mandap. She used pampas grass and eucalyptus to enhance the Spanish moss trees and reinforced the pink undertones with soft drapery. The final result felt more rustic and bohemian, she describes, than the expected décor.

“Usually in a West Indian Hindu Wedding, the bride is carried in a doli by her brothers or male cousins, but I wanted a special moment with my father,” Amanda says of making her grand entrance escorted by her dad.

Amanda admits she tried, unsuccessfully, to catch a glimpse of Kyle during the baraat. “The first time we saw each other was when I walked down the aisle and was worth the wait,” she says.

To protect themselves from the hot Floridian sun, guests held parasols while witnessing the ceremony.

Amanda and Kyle took part in a traditional Hindu ceremony, which at times, incorporates parents and other family members.

“Exchanging malas is a significant part of our ceremony and I had a vision of fresh Italian ruscus and eucalyptus with roses, ranunculus, among other gorgeous florals,” Amanda says, noting they were among her favorite floral elements of the celebration.

“Commit to your vision,” Amanda says. “Do not let anyone deter you from obtaining your dream. Anything is attainable as long as you are committed.”

Guests were treated to a mini reception following the ceremony, which included a vintage photo bus for silly pictures and a traditional Guyanese lunch.

A tassa band performed as Amanda danced during the celebration.

The next day, the couple threw a formal reception at the Dr. Phillips Center for the Performing Arts. “It had the ‘wow factor’ my husband and I always envisioned for a black-tie affair,” Amanda says.

For the reception, Amanda chose a Reem Acra ball gown, with intricate detailing on the bodice and a horsehair skirt. “When I revealed the dress to them, they both cried,” Amanda says of having her mother and grandmother see the white gown. She paired the look with Christian Louboutin heels, her bridal mehndi peeking through.

Unlike the Hindu ceremony, today Amanda got a first look with Kyle, seeing him in his Emporio Armani tuxedo and bow tie.

Because Beyonce and Jay Z are among their favorite musical artists, the couple included lyrics from “Young Forever” on their reception card: “Let’s dance in style, let’s dance for a while.” It certainly set the mood for what was to come, including a first dance on the rooftop overlooking the city.

Amanda and Kyle took a different approach to the vibe of the reception. While the ceremony was organic and rustic, the reception felt much more modern and chic. Puffs of baby’s breath decorated the tables while the head table had plumes of white orchids.

“Our guest experience was at the top of our list, and we believe we gave them a wedding to remember,” Amanda says. That included heartfelt speeches, a dinner with braised short rib and wild mushroom ravioli, as well as a brandy and almond wedding cake.

To end the night, the couple and their guests headed to a dance party on the rooftop, where plush lounge areas and three DJs kept the festivities going well into the evening.

Bridal Salons The Bollywood Closet; The Bridal Finery; One and Only Bridal