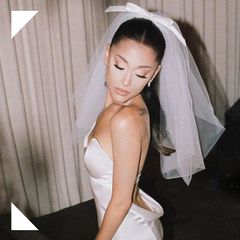 Sumiko Wilson
Sumiko Wilson is an Editorial Intern at Brides. She is a journalism student at Ryerson University, due to graduate in December 2021.
Brides's Editorial Guidelines

When it comes to wedding day blueprints, we often look to the stars. Of course, their stunning designer dresses and dreamy decor give us plenty to swoon over, but celebrity nuptials are also ripe with beauty inspo, too. After all, the red carpet isn't the only place where celebs set the tone!

Whether their wedding day hair was accessorized to perfection or they nailed the dewy bridal glow, these are the bridal beauty looks that have managed to remain on our radar, no matter how many years have passed. Keep scrolling to take a look at the most memorable celebrity wedding makeup looks to date—and don't forget to take notes.

Having met Richard Burton on the set of Cleopatra, it's no surprise that Elizabeth Taylor opted for an over-the-top glam look for the couple's 1964 nuptials in Montreal.

Though she didn't wear a full-on Cleopatra cat-eye like in the film, Taylor paired her signature bold eye with a pink lip and the braid to end all braids. The waist-length 'do was woven with hyacinths and lilies, giving her the monopoly on wedding day flower crowns long before the Snapchat filter existed.

In one of the only photos we've seen of Susan Sarandon's 1967 nuptials to Chris Sarandon, the Oscar-winner is a vision of signature '60s beauty with her thick liner and curly lashes for a doe-eyed finish. To contrast her minimalist makeup look, she wore a long, dramatic braid and accessorized with flowers (à la Elizabeth Taylor).

Priscilla Presley is known for her iconic beauty looks (she quite literally took the classic bouffant style to new heights), so of course she stepped out in full glam when she married Elvis in a private Las Vegas ceremony. True to form for the '60s, the bride's makeup was all about the eyes. To soften the cut crease and dramatic cat eye, she wore extra long, extra fluffy lashes and topped it off with a soft pink lip.

Though most of the conversation surrounding Bianca Jagger's 1971 wedding look is limited to her glamorous hat, flawless blowout, and bold suit, her makeup was just as memorable. When she exchanged vows with Mick Jagger, she embodied "cool girl" lit-from-within beauty with a toned-down look that kept things natural—though her ethereal glam can partly be attributed to her pregnancy glow (she was expecting daughter Jade at the time)!

As a certified diva, Diana Ross isn't one who comes to mind when you think "understated." She kept this energy going at her '80s nuptials to Norwegian businessman Arne Næss Jr., where she paired a dramatic smoky eye with bright blush and a rosy lip.

Victoria Beckham's wedding day glow is second-to-none. In contrast to her over-the-top Vera Wang gown (and her go-to stage makeup at the time), she wore dewy, natural makeup down the aisle with a nude, glossy lip.

Solange's New Orleans nuptials to music video director Alan Ferguson began with a bike ride to the ceremony and ended with a post-wedding Second Line, so it goes without saying that it wasn't your typical vow exchange. Though she swapped between different all-white looks before, after, and during her "I do's," she stuck with a classic red lip all day.

Gabrielle Union's go-to makeup artist Malika James was behind her show-stopping looks for her IRL wedding to Dwyane Wade and her fictional wedding on BET's Being Mary Jane. Since her real-life nuptials were in the infamous Miami heat, her glam was sunkissed and glowy—that way, it wouldn't budge with sweat. The star of the show was her highlight, though James admitted that she can't recall which product she used to give the bride's cheekbones a luminous look.

Though the Kimye era has unfortunately ended, Kim Kardashian West's wedding makeup will always be iconic. When she exchanged vows with Kanye West in May 2014, her look was true to form: classic and contoured.

To celebrate her five-year wedding anniversary, Kardashian West launched a palette inspired by the look that Mario Dedivanovic created for the day, which included six rosy neutrals that embodied her wedding's aesthetic: ethereal and tastefully over-the-top. Dedivanovic says that he recalls spending the morning of the nuptials praying that KKW's wedding day beat would be the greatest makeup look he ever created. It's not a stretch to say that this was a mission accomplished.

Keyshia Ka'Oir's 2017 wedding to Gucci Mane was larger than life. It allegedly cost nearly $2 million and was broadcast live on BET. Needless to say, Ka'Oir's take on bridal beauty was anything but understated. The beauty entrepreneur outsourced her wedding day glam to Angie Martinez, who worked with products from Ka'Oir's own line. To create the sparkly eye, she combined hues from Jaclyn Hill's Morphe palette with Urban Decay's Heavy Metal Glitter.

When Samira Wiley wed Orange is the New Black writer Lauren Morelli in 2017, her makeup was just as dreamy and glam as the nuptials—but not quite as colorful. Despite the technicolor vibe at the confetti-themed ceremony in Palm Springs, Wiley opted for a neutral palette to highlight her natural glow.

Priyanka Chopra stunned in multiple bridal looks during her three-day wedding to Nick Jonas in 2018. On the final day of the wedding festivities, Chopra walked down the aisle in a custom Ralph Lauren gown with a high-necked overlay coat that took a total of 1,826 hours to complete. To complement the instantly iconic gown, Chopra’s makeup artist Yumi Mori gave the actress an equally stunning bridal beauty look marked by radiant skin and a bold red lip.

“I wanted her skin to shimmer and glow," the MUA told Glamour. To pull it off, she used Marc Jacobs Beauty O!Mega Glaze All-Over Foil Luminizer and the now-discontinued Accomplice Instant Blurring Beauty Powder. For Chopra’s eyes, Mori swiped on a coral shadow and a few generous coats of mascara, before finishing off the entire look with a bright red lip stain.

We were mesmerized when Prince Harry lifted Meghan Markle's veil at their iconic 2018 ceremony to reveal her wedding makeup. Daniel Martin was the MUA behind the Duchess's dewy, doe-eyed look, which shocked some royal commentators, who believed that she would do her own makeup à la Kate Middleton.

Martin kept most of the bride's makeup super minimal—her freckles were still visible and Martin admitted to us that Markle opted for a balm instead of lipstick or gloss. Instead, the look that Martin created was all about the eyes, complete with a smoky, brown lid and subtle lash extensions. After the I dos, he told Glamour, "I wanted her eyes to almost 'flutter' as she looked up at Harry (he's 6'1")." To get that effect, he customized the extensions with extra volume on the corners. "This added weight to her natural lashes without looking heavy," he explained.

The Ultimate Guide to Bridal Makeup
15 of 20

Hilary Duff and Matthew Koma exchanged vows at home, but Duff still dialed up the drama for her wedding day beauty. She opted for a deep liner look with a shimmery shadow, along with a strobe highlighter that brought her bridal glow to new heights. But all eyes were on her sleek bob, which Duff's stylist Nikki Lee trimmed an extra inch off of to ensure that it would clear her Jenny Packham gown's neckline. To top it off, she accented the style with a pearl-encrusted Jennifer Behr headband. This is what dreams are made of.

Sabrina Elba debuted her wedding look on the cover of British Vogue, which is iconic in itself. But the look, created by Charlotte Tilbury, is particularly memorable for its elevated take on classic bridal glam. When Tilbury recreated the look in a step-by-step for Vogue, Elba described wanting "no-makeup makeup" for the big day, which Tilbury pulled off using her own line of best-selling products, naturally.

For Elba's Moroccan wedding, Tilbury's kit included her Hollywood Contour Wand, her Airbrush Flawless Finish Powder for a picture-perfect glow, and her Lovegasm Palette for a rosy eye look. She then finished things off by combining her Hollywood Honey Lip Cheat with her M.I Kiss Lipstick. Tilbury's take on bridal beauty is so iconic that she's since launched bridal-inspired shades of her Matte Revolution lipsticks.

Ariana Grande stayed true to her signature look for her at-home I do's to Dalton Gomez—and that's exactly what made the look so memorable. True to form, she wore a high pony, nude matte lip, and winged liner down the aisle, but MUA Ash K Holm elevated the look with a rosy shadow, deep contour, and heavy highlighter strobe.

Jasmine Tookes's Ecuador nuptials to Juan David Borrero were over-the-top in almost every respect—from her Zuhair Murad gown's 15-foot train to the all-gold church where they exchanged vows. But for her Grace Kelly-inspired wedding look, the supermodel kept her makeup natural-looking.

How could Paris Hilton's wedding makeup be anything but iconic? To complement her long-sleeved floral Oscar de la Renta gown, Hilton wore a bun with a deep side part and wavy, cascading bangs for her fall wedding to Carter Reum. As the reigning queen of all things extra, it's no surprise that she opted for XXL lashes. But in all other respects, Hilton's wedding makeup, executed by Steven Tabimba, was notable for its subtlety, complete with a rosy, glossy lip and a deep, camera-ready contour.

The Ultimate Guide to Bridal Makeup